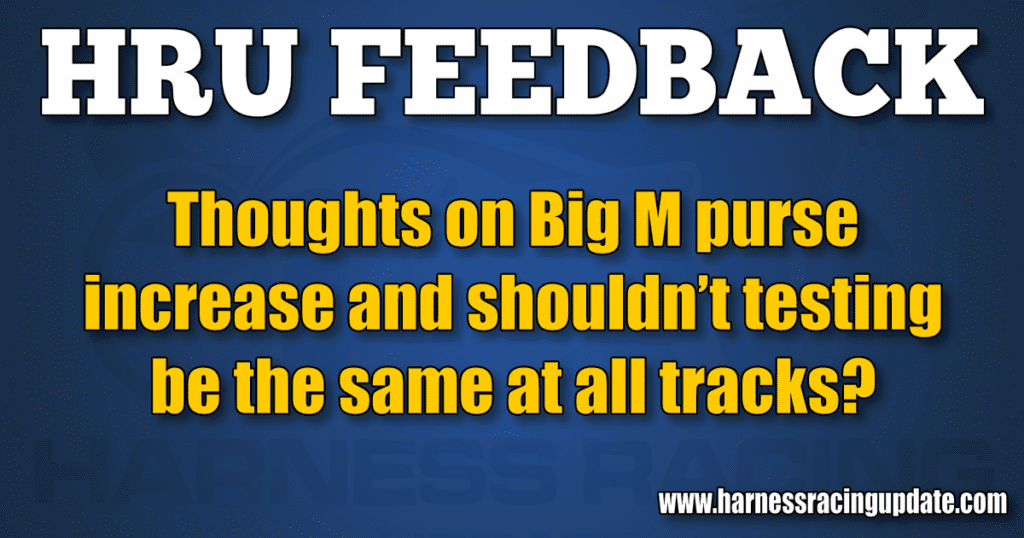 With the impending openers at both Harrah’s Philadelphia and Mohegan Sun Pocono, the Meadowlands’ handle takes a hit as connections look to the higher purses and thus fields are more apt to fill at the aforementioned tracks to the detriment of the Meadowlands.

In your edition of Feb. 22, “Countdown to bigger Meadowlands purses is on” you wrote: “Beginning Friday, March 1, purses at the Big M — thanks to the recent purse subsidy legislation signed into law by Gov. Phil Murphy — will get a $40,000 per-card boost. Purses will get another $40,000 jolt on March 29. After a Saturday (Feb. 16) night program that saw a 2019-best $3,166,920 in all-source wagering, there is for great optimism at the East Rutherford mile oval.”

At a tipping point for harness racing, we are now reminded of the Dark Side. The scars of the “Pena” years are still visible. Those times were lose-lose for both the tracks and bettors. Bettors declined to wager at the tracks and the tracks lost valuable betting pools from which to draw their profits. Most bettors took notice and did 180-degree turns when Pena’s cheap, recently claimed horse improved by 3+ seconds and beat newly imported New Zealand super horse, Auckland Reactor. Most of racing sees the issue as testing ineptness in the officials charged with keeping our sport honest.

Fast forward a couple of years and we are seeing history repeat itself at Freehold Raceway and trainer Nick Surick. We see NS dominance at Freehold, but at larger tracks with big dollars for superior testing — NOT SO MUCH. Unfortunately, it appears that we, the betting public are being provided a grade “D” oversight at the smaller B tracks. When tracks knowingly provide an inferior oversight product it may be time to replace some management principals or ask why the NJ Gaming Commission has stood by idly, in my book that makes them enablers.

Here’s a brainstorm: let’s get the tracks altogether and then they can negotiate a one-price-fits-all testing program that serves the bettors, the tracks and the honest trainers. Come on guys, this science but the fact that you haven’t come up with a solution on your own is troubling.