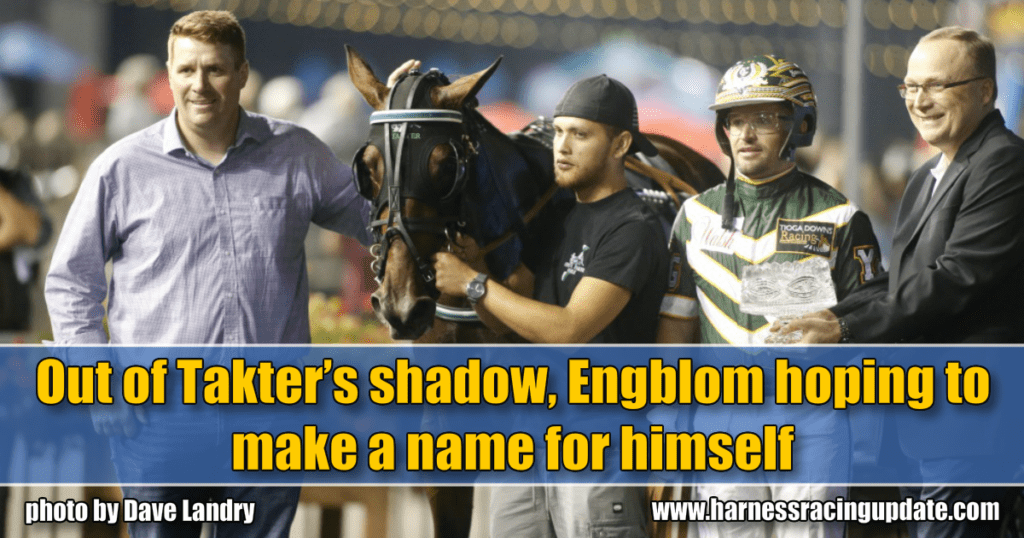 Out of Takter’s shadow, Engblom hoping to make a name for himself

Per Engblom isn’t trying to be the next Jimmy Takter. That, he says, would be impossible. But that doesn’t mean the 39-year-old former assistant to Takter is aiming low. With his former boss having retired and turning over dozens of his horses to his former assistant, Engblom is determined to show people he has the skills to be a top trainer on his own and that, he, too, can excel at the sport’s highest levels.

Takter made the stunning announcement in 2017 that he would be retiring after the 2018 season, even though he was only in his mid-fifties and widely considered the best trainer in the sport. He said his stable would be divided up between his daughter, Nancy Johansson, and Engblom. The latter had two stints working as an assistant to Takter, from 2000 to 2004, and then from 2012 to 2016.

Taking over for a legend can be a mixed bag. You can’t get a getter education than working for Takter and Takter left him with some very good horses. But the pressure to succeed must be overwhelming.

“I feel like I’m never going to be Jimmy,” he said. “I know that. I have to try to be myself and I have to do my own thing and, hopefully, I can do good for my owners and customers and my horses can do the best they can.”

Engblom has 42 horses — 24 of them are 2-year-olds and Engblom, Takter and his bloodstock advisor Perry Soderberg, worked together to pick them out. He has 18 older horses and said “13 to 15″ of them came from Takter.

One that did not is the Australian-bred trotter La Grange, a son of Muscle Hill. A winner of six of 22 career starts before he arrived in the U.S., he made his debut for Engblom on Feb. 21 at Yonkers. Despite drawing post eight, he won the $20,000 conditioned race by four lengths to give his trainer his first ever win in the U.S.

“Of course it felt good to get that win,” Engblom said. “He was going from the eight so we figured it wouldn’t be easy. It’s always nice to hit it out of right away. We had very good reports on him from down there. He’s a big horse and needed some time, but he is a super well-bred horse and I think he’ll do some good here. Maybe he will be a stakes horse. He was born in November, so he’s 5 here and 4 there. I’m going to give him time. He fit that race at Yonkers well. He’ll need a couple of races on the bigger track. Maybe I’ll go for a couple of series at Pocono. His first start was very good for him.”

Lost In Time leads the list of older horses that Engblom acquired from Takter. The 2017 Governors Cup winner, he had an injury plagued 3-year-old season that kept him to just four starts, but Engblom has high expectations for him this year.

“He was finishing very well in the North America Cup, but, unfortunately, got hurt,” Engblom said. “He’s coming back off surgery, so he may not race for us for a while, but he’s a top horse and I think he’ll do really well this year.”

Other horses that he took over from Takter that he is high on include: Osterc, Super Schissel and Beautiful Sin.

After he retired, Takter take took off to Australia and New Zealand on vacation. He came back briefly and then resumed his travels. Engblom says he hears from Takter often, but it’s mainly to give him pep talks. If he is going stand watch over Engblom and Johansson and tell them what to do, he hasn’t shown any signs of that yet. That said, Engblom welcomes his input.

“It’s nice to have him to lean on to make decisions,” Engblom said. “He’s actually very happy with all the horses. He knows if I have a problem I will give him a call. This time of year we don’t expect to have too much trouble. The plan is he’ll help us out in April and May because that is crunch time for the babies. His knowledge and experience too good. It’s not something where you would say to him no thank you. He’ll be coming and going. I cannot count on him being there every day. I need to prove myself on my own.”