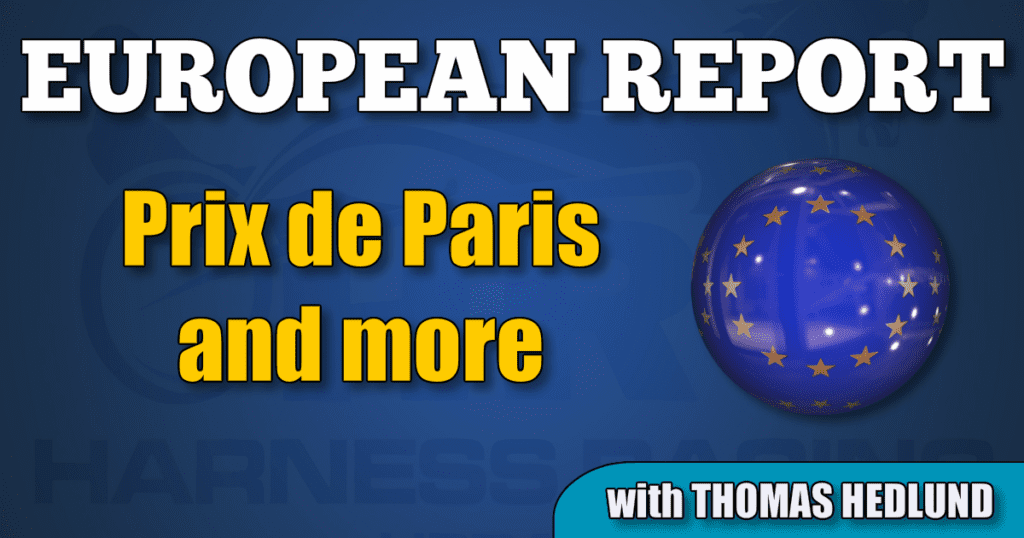 Prix d’Amérique winner Belina Josselyn (Love You) will enter the third and last of the Grand Prix-races at Vincennes this winter meeting. Jean-Michel Bazire also starts Prix d’Amérique runner up Looking Superb in the $397,000 Prix de Paris, a race contested over 4,150 meters (about 2.6 miles).

Two laps on Vincennes track is a heavy task for the 12 contenders in this year’s Prix de Paris. Prix de France winner Readly Express (Ready Cash) is missing since trainer Timo Nurmos and owner Rolf Andersson decided that Readly Express will continue the racing during the spring and then most in mile races, a journey that will end with participation in the Elitloppet at Solvalla at the end of May.

Solvalla has one horse ready for the big battle in May and wouldn’t it be a big surprise if American-bred Propulsion (Muscle Hill) is one of the earliest invited trotters for the event. Trainer Daniel Redén has announced that Propulsion will race during the spring towards the Elitloppet instead of serving as a stallion.

Ready Cash son Gotland was undefeated before the 3-year-old trotter’s big mission in the $190,000 Criterium des jeunes at Vincennes last Sunday. But when it was the most at stake, Philippe Allaire’s horse showed that he wasn’t in the best mood for racing.

With a 7-for-7 win streak before the race, Gotland was the first choice in the Criterium des jeunes, but the Ready Cash son made an early break and was out of chances to reach his eighth consecutive victory from his debut.

Instead it was Sébastien Guarato-trained Green Grass (Bold Eagle) who won in mile rate 1:59.3 over 1.7 miles for driver Gabriele Gelormini. The duo hit the lead with 5/8ths of a mile to go and kept attacker Golden Bridge a nose behind at the wire.

Nine-year-old trotter Nadal Broline (Yankee Glide—Aimee’s Promise, 1:51,3, $645,900) has won 22 races in 52 starts for trainer Reijo Liljendahl, but from now on, the bronze medalist from last year’s Elitloppet will be trained by Björn Goop.

Reijo Liljendahl expressed his thoughts about the move at sullysport.se and explained that it was his decision to let owner Onkel Invest Oy move all 14 horses in his stable.

”Of course this is boring. I’ve made it to the final of Elitloppet two times (Nadal Broline and Formula One), I’ve won Breeders Crown in Sweden and I think that I’ve done a decent job with the horses. But I have strong reasons to act the way I do,” he told Sulkysport.