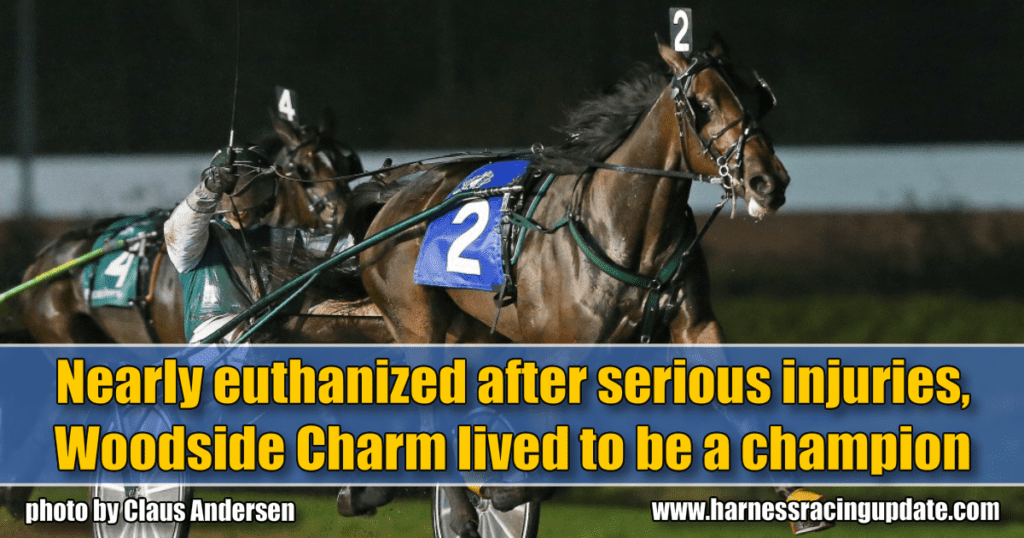 Mere moments from being euthanized after serious injuries as a foal, Woodside Charm survived and went on to win the 2018 Dan Patch Award for freshman trotting filly of the year.

Woodside Charm will be honored in ceremonies Sunday (Feb. 24) at the Rosen Shingle Creek in Orlando, FL as the sport’s top freshman filly trotter. However, long before she won the Breeders Crown and locked up the Dan Patch Award for her division, chances were slim the Chapter Seven filly would make it to the races. In fact, Lester Beechy, who raised the foal out of Fireworks Hanover, almost gave up on the trotter after an injury and subsequent surgery. Only the advice of vet Jeff King would change his mind… twice.

“There’s a point in time where you have to be humane to the animal,” said Beechy, who breeds and sells yearlings under the name of Woodside Farm. “If it’s too bad, you have to put them down. When you see an animal suffer like that, it just breaks your heart.”

Beechy was contemplating this difficult decision when Woodside Charm was just a weanling. After purchasing Fireworks Hanover, dam of millionaire and world champion Explosive Matter, at the Harrisburg sale in foal to Chapter Seven, he welcomed the filly in May 2016 at his Wolcottville, IN farm. He described her as good natured, friendly and very athletic. Over the July 4 holiday, Beechy and his family headed west for a trip to Colorado, not knowing that when they returned, the trouble with this promising baby would begin.

“That’s a good time for us to go on a little vacation. We had one of the neighbors keep an eye on the mares,” the breeder said. “The mares are all bred back and there’s plenty of pasture. As long as they’ve got water and grass, they kind of take care of themselves.”

Upon returning home, Beechy inspected the herd, which typically includes between 10 to 15 mares and their foals. During that inspection, he noticed puss on the leg of the months-old Woodside Charm.

“I saw a little puss oozing off this filly’s cannon bone. I caught the mare and brought her in and saw right away she had a little break in the skin,” Beechy recalled. “It didn’t look like anything serious. I put her on medication for the weekend, and Monday morning I called my vet.”

King, who is also owner of Victory Hill Farm with his wife, Maria, arrived to inspect the filly, and found it required a closer look. He did not have an x-ray machine on the truck, so he returned the next day. Upon further review, Woodside Charm had sustained a small slab fracture to her cannon bone. It is unknown how the injury occurred, but the breeder surmises another foal or mare likely kicked the filly while in the pasture.

“She had a piece in there about an inch and a half in length,” he said. “It was just a very tiny sliver, but he (King) said it’s got to come out.”

Beechy sent the filly to a clinic to have the fracture addressed. The primary surgeon was on leave, so a replacement performed the procedure. The result made a bad situation worse.

“About two weeks later, he called me and said the filly was ready to come back home. She came home with an open wound with exposed cannon bone, which was very nasty,” said Beechy. “That just really, really upset me. Here I had a filly that I thought could be something. With an exposed cannon bone you always think about getting an infection in the bone. It was horrible.”

The breeder again reached out to King. After inspecting the trotter, he suggested she could be treated at Woodside Farm, and he would check in on her each day to track the progress. A few weeks in, however, Beechy felt he was at a crossroads. Not seeing much progress, concerned about infection, and feeling that the filly was suffering, he suggested euthanizing the baby. He had a gut feeling things would continue to go south and not end well.

“She was three months old at that time. We keep bandaging and medicating. She wasn’t in a lot of pain, but there was discomfort there,” the breeder said. “I guess it wore me down just to see her. It’s not like she was in a lot of distress, but it was painful for me. One day I said, ‘Jeff, why don’t you just put this filly down and get her out of her misery.’ He walked around her and looked at me and said, ‘Lester, are you sure? She could be a broodmare, even though you won’t ever be able to sell her.’”

King had talked Beechy out of putting Woodside Charm down. He would keep her as a new addition to his broodmare band. But King’s influence on the filly’s career was not over. Fast forward to the next year, and the veterinarian was again at Woodside Farm, this time for Coggins tests on babies Beechy had consigned to the Hoosier Classic Yearling Sale. While there, King inquired about the filly.

“He asked, ‘How’s that filly doing?’ I said, ‘Well, she looks good. She’s healthy and she bounces around, she trots nice,’” Beechy said. “I brought her in and he looked at her and said, ‘You have to give this filly a shot.’ I asked, ‘Do you really think it’s worth it?’ He said, ‘Of course. If you can work something out with a trainer, give her a shot. She needs a shot.’”

Enter Verlin Yoder. The trainer would stop by the northern Indiana farm to inspect babies leading up to the fall sales. At that time, Beechy asked if he would be interested in taking the filly as a project. He agreed and a deal was struck to entrust him with the trotter. At Christmas, Yoder told the breeder that while the filly showed ability, it was unlikely she would make it to the races. His message: book her to breed in 2018.

“He said, ‘She will never be a racehorse. She favors that leg and she dog tracks and I can’t get her to trot straight.’ He tells me that she shows all kinds of talent, but she’ll always hit that shin and never go straight,” the breeder said. “She favored that leg long enough, and that’s how she walked, on a little bit of an angle trying to protect it. He had to teach her that the leg was okay and she didn’t need to favor it.”

In just a few short months, the message from Yoder changed. Woodside Charm favored the leg less and less, and by March, he instructed Beechy to forgo breeding the filly. Instead, he would try his hand at racing her. The rest, as they say, is history. Woodside Charm would go on to win each of her seven freshman starts, setting a world record before handily winning the $600,000 Breeders Crown final with Yoder in the sulky. The filly, once thought unable to race, finished the season with $521,658 in earnings.

“It was always exciting to see when she was entered in a race, where she would draw, and see what’s in there with her. When post time came you held your breath for two minutes and hope you don’t pass out,” Beechy said with a laugh when describing the 2018 campaign. “I think it’s just awesome that a small guy like that can be part of the big game and be competitive. Everybody thinks you have to have a stable of 100 horses to be successful, and that’s just not true.”

Beechy will not be in Orlando to celebrate Woodside Charm’s Dan Patch Award. He will be home in Indiana, awaiting Fireworks Hanover’s latest foal, a trotter from the first crop of Dover Dan. He will breed her back to Chapter Seven this year, hoping for another good result. In the future, he looks forward to the day when Woodside Charm returns to his farm to join the broodmare band. He’s glad that his gut feelings were proven wrong.