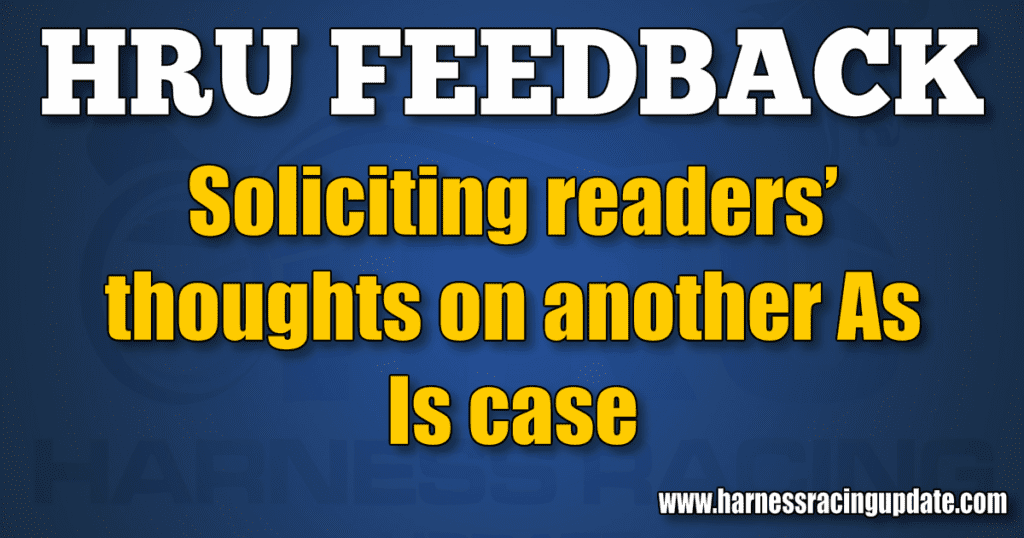 Soliciting readers’ thoughts on another As Is case

I read with interest the recent Harness Racing Update stories on the Richard Young case (full story here) and a response from Jim Avritt Sr. (full story here). My interest was sparked by two reasons, one being the fact that I am currently involved with another ventral sepal heart defect (VSD) in a recently-purchased yearling (now a 2-year-old). The other reason I will put forth in a moment, and one that would beg other’s comments.

As the buying public knows, the “as is” clause has been around for a long time, and rightly so, for many, many reasons. Like other legal terms (and I of course am not a lawyer), as well as to protect certain parties in transactions, there is also a considered intent. I am not sure how that intent would work with a VSD and whether or not a breeder should have known that the condition existed when the yearling went to a sale, and I will refrain from any further comment on that one.

However, I am aware of at least two other different types of yearling cases that have occurred, including one ongoing at the present, in a different area of North America and would certainly like to hear from Mr. Avritt Sr. and others that may wish to comment. Both of these cases involve the buying of yearling fillies, that were subsequently deemed to be in foal.

To me, as a non legal expert, the intent of the “as is” clause, is concerning many and multiple musculoskeletal reasons, perhaps some congenital reasons, sick or diseased, faults and defects, etc. However, if I am going to a yearling sale, I am going with the expressed purpose of buying a young standardbred that I may be able to train and potentially race in the future. I am not going to a yearling sale to buy a “broodmare in foal”, that may be trainable initially, but certainly not for a very long time. The mixed sale would be where I should be going if I wanted such a broodmare in foal.

Not only would I have to think that the intent of the “as is” would not cover such a situation, but it would also imply gross mismanagement on the part of the yearling breeder, especially if they were unaware and presented such a pregnant yearling at a yearling sale. And as far as examining for pregnancy in a yearling filly pre-purchase, I am totally unaware of any veterinarian that does that or would even be allowed by the consignor/breeder to do that at any sales complex, as it may be deemed a risky procedure in a young relatively un-handled filly in a strange environment.

I would be most interested to hear some comments on these cases and how implied warranty’s or even examinations for such may apply.

In Brett Sturman’s “Between the Lines” column on Feb. 14, he advocates for making statistical record data publicly available and cites some examples of records and their availability online.

His assertion that “There isn’t any central location to go in hopes of finding out what pretty basic records are,” is clearly inaccurate. The USTA website with its statistical information in the online Trotting & Pacing Guide and Pathway contains significant information on “basic records.” While it is necessary to register for a Pathway account, there is no charge for that.

The online Trotting & Pacing Guide, which was launched in June 2016, is the most complete compilation of statistics and records in the history of the sport with the advantage that information is available anywhere, anytime on any Internet-capable device and is now updated on a daily basis instead of annually in a printed book, which contained obsolete information every time a new record was set.

It’s easy to look up simple, “basic” stats like the fastest race of all time or the most driver wins in a year that are similar top-line stats as those cited in the column.

“Basic” all-time and recent year stats and records for horses, owners, trainers and drivers; world records; North American record times for both gaits on any size track; leading sire and broodmare statistics; results of major races and sales; and award winners are all easily accessible in the T & P Guide and Pathway online for free. Many of the reports are in sortable columns and new reports are continuously being developed and added with the most recent ones being the Top Owners information on the Statistics tab and fines and suspension rulings reports by people, facility and state in Pathway.

Perhaps Brett should become more familiar with the information available through those resources. The USTA Information and Research staff would be happy to assist with that. And for specific track records, the individual tracks should be able to help with those.

Furthermore, comparing the simple examples of the availability of the “basic” records for rushing yards in an NFL game or strikeouts in a major league baseball with the questions about winning seven of seven on a single card or whether a trainer has won 100 per cent of his races with as many as seven starts is like comparing apples to oranges.

Annual statistics for 100-yard rushing games in the NFL is available, but which running back in NFL history has the most 100-yard games at Arrowhead Stadium? Or in major league baseball, what is the list of hitters with the all-time, top 10 batting averages at Wrigley Field in day games only?

Like the inquiries submitted to the USTA and the research information used in this article, those answers can be researched and compiled through queries in the football and baseball data bases.

Regarding the fact that some of the USTA statistical reports are not free, the Pathway fees are minimal and necessary because there is a cost involved in collecting, compiling, managing and disseminating statistical data and records. As the centralized registry and record keeper for harness racing, the USTA provides critical services that would be much more expensive, if even possible, for the individual entities in the industry to accomplish without the USTA.

However, any media member working on a story for publication that needs any available statistical information for that purpose, can feel free to contact me directly and I’ll make sure that there is no charge for that request.

Finally, while the USTA is proud of the information currently available through the T & P Guide and Pathway, as well as other innovations that we’ve developed, like online registration, online entry and the eSales program introduced last August, we’re constantly working to expand and improve our information and welcome suggestions on what our members and fans would like to see.