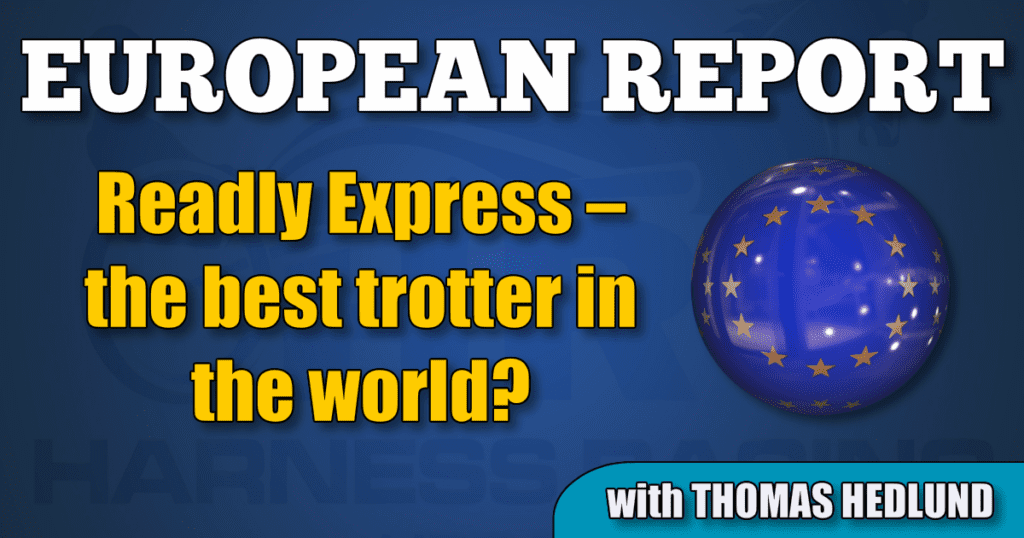 Readly Express – the best trotter in the world?

Swedish-bred Readly Express (Ready Cash) had an unusually good weekend last week. On Friday night, the Timo Nurmos’ trained 7-year-old was named Sweden’s Horse of the Year for 2018 at the Awards in Stockholm and on Sunday afternoon, he played with his opponents in Prix de France ($398,000) at Vincennes racetrack in Paris.

Readly Express was outstanding in the voting for best Swedish older horse at the awards on Friday (Feb. 8) and in the Horse of the Year category, where even trotters bred in foreign countries compete. Readly Express got 46.3 per cent of the votes, compared to Propulsion’s 38.3 per cent. Elitloppet winner Ringostarr Treb got 8.4 per cent and Mellby Free 7.1 per cent of the total votes.

In the 1.3 mile Prix de France, Readly Express started from post five and Björn Goop was eager to hit the lead with the son of Ready Cash. When the duo was in front, Goop was allowed to keep the pace really slow for about 600-700 meters, which ended up in a very fast last quarter of a mile. When Bold Eagle had to do the job first over, Goop controlled the field and let Readly Express sprint away to a comfortable win in mile rate 1:53.

Uza Josselyn gave up the lead to Readly Express at an early stage of the race and followed to a silver medal ahead of Bold Eagle.

Jean-Michel Bazire, who dominated the Prix d’Amérique by winning with Belina Josselyn and finished second with Looking Superb and fourth with Davidson du Pont had same three horses in the field in Prix de France, but the mission for team Bazire was over after just 200 meters. Davidson du Pont made an early break behind the gate, while Belina Josselyn galloped after 150 meters and obstructed Looking Superb, who made a break soon after.

Social media connected to harness racing business couldn’t hold back the superlatives when Readly Express flew home in the stretch and, of course, the fans want to see Timo Nurmos’ trotter at Solvalla, in Elitloppet at the end of May this year. In past years, the breeding business has taken too much of power from the horse and it’s not yet decided how his connections will handle that this year.

His next target might be in Prix de Paris over 2.5 miles, which most certainly will be an easy task for the champion trotter. Normally, the best horses in Europe (France) avoid this race and this year it’s suitable for Readly Express to enter it.
What we should keep in mind regarding Readly Express is that he, so far, is quite unexperienced for a horse in the elite trotting class in Europe. His 34 starts and 24 wins have resulted in a lifetime earnings of $2,276,621.

In monté race Prix de Centaures ($250,000), the first choice Fado du Chene made an early break and normally all his chances to hit the podium would have disappeared at that point. But jockey Paul-Philippe Ploquin gave his horse another shot for the lead and despite the lost lengths, Fado du Chene was seen in front in the last turn.

Evangelina Blue (Speedy Blue) disarmed the heavy favourite in the home stretch and the Jean-Philippe Mary trained horse landed in a mile rate of 1:55 over 1.3 miles.

The F-crop (4-year-olds) in France seems to be an eminent kind and when dominant Face Time Bourbon is missing from races, Falcao de Laurma (Uniclove) is the one that collects the big trophies. Falcao de Laurma defeated Face Time Bourbon when they met in Prix de tonnac-Villenueve earlier this winter and last Sunday the Thierry Duvaldestin trained trotter was impressive when he won Prix Ephrem Houel ($125,000) at Vincennes racetrack.

From the lead, the 4-year-old Uniclove son won comfortably for driver Anthony Barrier in mile rate 1:59 over 1.7 miles.

Åke Svanstedt will enlarge his stable in New Jersey with one of the best mares in Sweden the previous seasons.

Cantab Hall mare Darling Meares has been a star since her early days at the track and as a 3-year-old she won the biggest race for mares in Sweden, The Oaks, where she earned more than $300,000. Trainer Stefan Persson has followed a nice plan for his horse throughout the years and during 2018 Darling Mearas won European Championship for Mares ($195,000) in mile rate 1:54,4 over 1.3 miles at Solvalla.

Twelve wins in 28 starts and a lifetime earnings of nearly $700,000 is what Darling Mearas has achieved so far.

“There are too few big races for mares in this category in Sweden and that’s the reason why we made this decision,” said owner Calle Wihlborg to harness racing magazine Sulkysport.

”Together with trainer Stefan Persson we reached the decision that Åke Svanstedt is the best choice and historically, Åke has shown that he is really good of letting older horses develop. Åke will decide when and where she is ready to start and we have staked her for Maple Leaf Trot,” said Wihlborg.