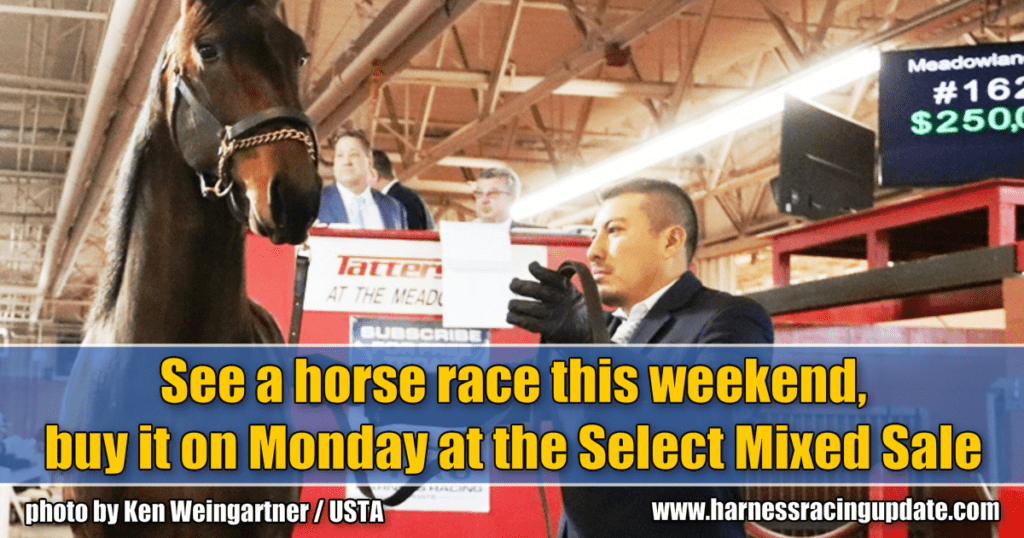 See a horse race this weekend, buy it on Monday at the January Select Mixed Sale

Forty-two horses racing this weekend will be sold at Monday’s Tattersalls January Select Sale at the Meadowlands.

David Reid said the key to Monday’s (Jan. 21) Tattersalls January Select Mixed Sale is 42 horses that are scheduled to be sold will race either tonight or Saturday before stepping into the auction ring.

“That’s a huge number… I think it’s very impressive to have that many horses racing,” said Reid, the general manager of the sale. “You’ve got 10 horses racing (tonight) at various tracks. You’ve got 18 horses qualifying at the Meadowlands on Saturday morning at 10 o’clock. Then you have 14 horses in to race on Saturday night.”

See sidebar (at the bottom of the next page) for a complete list of horses in to go.

“Obviously, it’s highlighted by (three) breedings to Sweet Lou, which is interesting because he had a tremendous year on the track last year and he had a very good year at the sales and his book is full and closed so it offers a unique opportunity to be able to get a breeding for 2019. In addition to him, we have shares of Trixton and Muscle Mass, Southwind Frank and others that are definitely attractive,” Reid said.

As for the racehorses, Meadowlands Saturday morning qualifiers can be viewed here.

After horses race, past performance lines will be updated here.

Updated booklets are being printed and distributed at various tracks.

The sale will be live streamed here.

Sale results will be available here.

The online list of outs for the sale is available here.

Videos will be available for the racehorses in the sales paddock.

“I just can’t stress enough that everyone checks the updated racelines over the weekend, watch the races on Friday night and Saturday night, watch the qualifiers. They are going to be streamed on Meadowlands’ website and there’s a lot being offered that’s ready to drop in the box in a lot of different jurisdictions, so I’m really happy about that,” Reid said.

Reid said he has a couple of theories as to why the number of horses in this year’s sale is down from recent years.

“The overall numbers of the sale are down in 2019 over past years and a lot of people have asked me why I think that is and I went back and looked and that’s the year that the fewest mares were bred. That was the low point, 2015, so those would be born in 2016 and 3-year-olds in 2019. That’s the lowest amount of mares that’s been bred in our industry. It’s more of a reflection of our numbers being down than anything, I believe,” Reid said.

Given the proliferation of slot-fuelled purses, Reid said more people seem to be keeping their racehorses than ever.

“I think jurisdictions are pretty healthy,” Reid said, referring to overnight purse structure. “That being said, I’m very excited and I think we have a lot of high-quality horses that are going to fill a lot of voids, so I’m really looking forward to Monday overall.”

Reid’s Preferred Equine Marketing Inc., will consign the most horses.

“Before we even get to the racehorses, we have a nice selection of broodmares – not a lot of them, but a nice selection,” Reid said. “They are in foal to very commercial sires and there’s been a number of mares in the sale that are either younger mares or proven mares, both on the racetrack and in the sales ring, that have sold yearlings for six figures. We have a mare in foal to Sweet Lou, mares in foal to American Ideal, mares in foal to Trixton, so I think there’s a good selection of broodmares, young and proven mares to go along with our stallion shares.”

“Then, for 4-year-olds, Hip 118 (Babes Dig Me) stands out to me. Hip 123 (Go West Go Fast) stands out to me. Hip 134 (Ron Bakardi) is an interesting horse that comes in from Western Canada. He’s qualifying Saturday. Hip 143 (When You Dance) comes down from Ben Wallace’s barn. He’s racing Saturday night at the Meadowlands. Hip 152 (Clouseau Hanover) is one of a number of Ron Burke’s offerings. He’s a very nice horse, along with Hip 160 Maroma Beach. Hip 161 (Mindtrip) has been racing terrific and he’s racing Saturday night. Those are all pacers.

Reid said a possible winter storm could have an impact on horses getting to the sale.