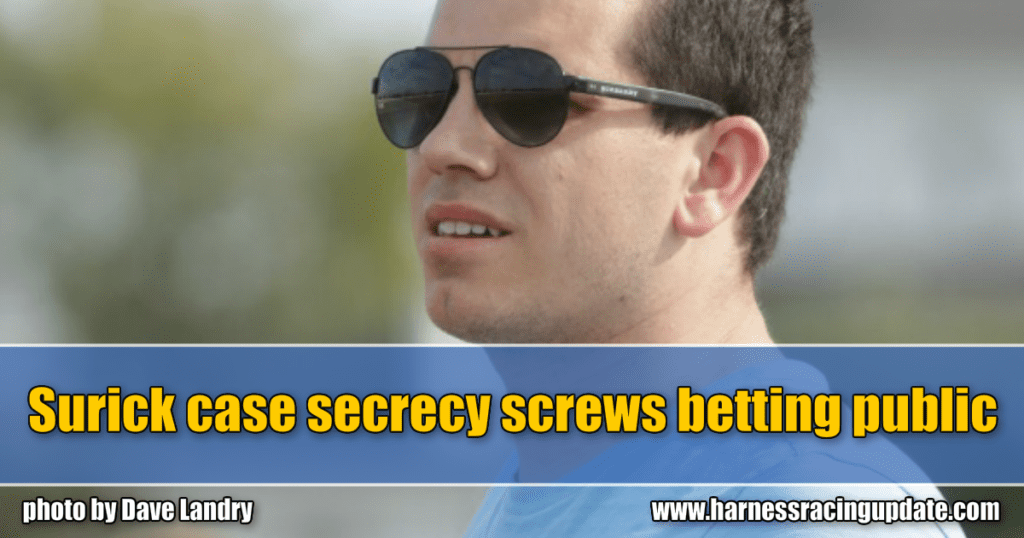 The public has been failed by the New Jersey Racing Commission’s lack of transparency in the Nick Surick case.

As most know by now, the New Jersey Racing Commission (NJRC) issued a full suspension to the training license of Nick Surick on Dec. 20. At that point, 12 horses were scratched that day between two tracks including the Meadowlands, and 29 horses were scratched in total over the next two days. Then on Dec. 28 following a hearing, a ruling was made to reinstate the conditioners license immediately.

The question that most want to know is what specifically happened, but the even larger question should be why has what happened not been disclosed to the public? First, some background.

As part of the NJRC ruling to suspend Surick, they cite a “failure to cooperate with an ongoing investigation being conducted by the investigative staff of the New Jersey Racing Commission and for failure to appear for a hearing with the Board of Judges…” In the same ruling, the NJRC cites numerous New Jersey Administrative Codes (N.J.A.C.) that it deemed Surick to be in violation of, and most speak directly to the expectation that a licensed individual cooperate fully with any interested agency, or in this case the NJRC.

But the code that is most directly related to the basis for the investigation is N.J.A.C. 13:71-23.15. This relates strictly to “Out-of-competition testing (on non-race days and on race days pre-race) of racehorses for Erythropoietin (Epogen, EPO), DarbEPO, or other blood doping agents…”

If the NJRC was conducting an investigation into a horse that they believed Surick was in possession of and that contained EPO, then suspended him for what they claimed to be him not fully cooperating, and then less than one week later Surick is reinstated by a court – all the while with no details of any sort offered by the NJRC – how is the public (particularly the betting public) supposed to have any confidence in participating in any race going forward that contains a Surick-trained horse?

However, all of that should change the moment the NJRC issued a full suspension of Surick’s license and all of his horses entered at that time were scratched immediately. At that point, it becomes a public matter.

In theory, harness racing remains a sport that is driven by wagering from the public. Last year, over $1.3 billion was wagered on harness racing in the U.S. alone. Providing the betting public with all relevant information to race participants should be paramount in ensuring transparency and integrity of the racing product.

Much of this seems as though it could have been prevented had the NJRC not acted with apparent haste in determining that Surick was not fully cooperating. The court’s decision to not uphold the NJRC suspension, but rather to issue an immediate and full reinstatement strongly suggests that there was a certain due process that Surick wasn’t afforded.

Had such a quick decision by the racing commission to suspend Surick not occurred, this would have never become a public issue. But once it did, it’s hard to just move on with business as usual while pretending that the events never occurred.

When the Surick suspension was first announced, no one knew anything. To this day, it’s still not entirely clear as to the cause of the investigation, what was the urgency in suspending him and why was it so abruptly overturned.

The NJRC is a state government agency in charge of overseeing essentially everything related to racing in the state, and in this instance one can only surmise based on what is known publicly that they acted in an inappropriate and ineffective way. They failed what would appear to be not only Surick, but also the owners who had horses scratched and the general racing public.

Even if another word about the matter is never spoken, there will remain a cloud of suspicion from the incident that follows Surick around. And unfortunately, it will only add fuel to those already skeptical of Surick’s winning ways.