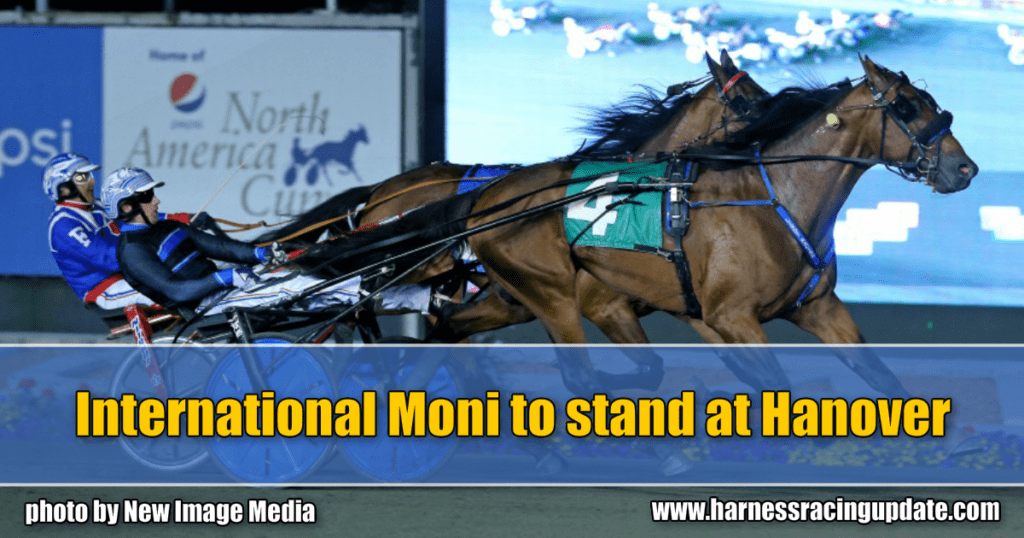 Hanover Shoe Farms and Moni Maker Stable (The Antonacci Family and David Reid) are excited to announce that the 2017 O’Brien Award-winning Three-Year-Old Trotter Of The Year INTERNATIONAL MONI will join the Hanover stallion roster in 2019.

By the outstanding French sire LOVE YOU, and out of the $5.5 million winning Hall of Famer, O’Brien, Dan Patch Horse and Trotter of the Year MONI MAKER, International Moni took a stellar record of 1:53.1 at 2 capturing an International Stallion Stake division. International Moni took home the 3-year-old trotting colt division trophy after winning 9 of 15 races at 3. His victories included an elimination of the Hambletonian, Goodtimes (elim. and Final) (video of final here), Carl Erskine Memorial, Breeders Crown elim., Kentucky Futurity elim, Simcoe, and the Bluegrass (video here).

Lindy Farm’s Frank M. Antonacci says International Moni is a culmination of three generations of work and feels he is a stallion that will attract a global market as well as injecting fresh blood into North America. “That’s why I say he’s a special horse on so many levels… It’s just really cool to think about it.”

LOVE YOU has produced champions in six countries including Prix d’Amerique winner Royal Dream and Elitloppet winner Nahar. Additionally, he is the broodmare sire of the brilliant Bold Eagle and the 2018 3-year-old star Face Time Bourbon..

“We’ve had a tremendous amount of success in the business with stallions and with this horse, we think he can reshape the breed for the next 25 years says Frank “The Elder” Antonacci.

Standing 16 hands tall, with his unique pedigree and classic looks, Hanover’s Dr. Bridgette Jablonsky says, “I don’t think there’s a mare in Canada or the U.S. that can’t be bred to him. Hanover will be supporting him heavily, amongst the mares being bred to him are D Train (dam of Donato Hanover) and two of her daughters.”