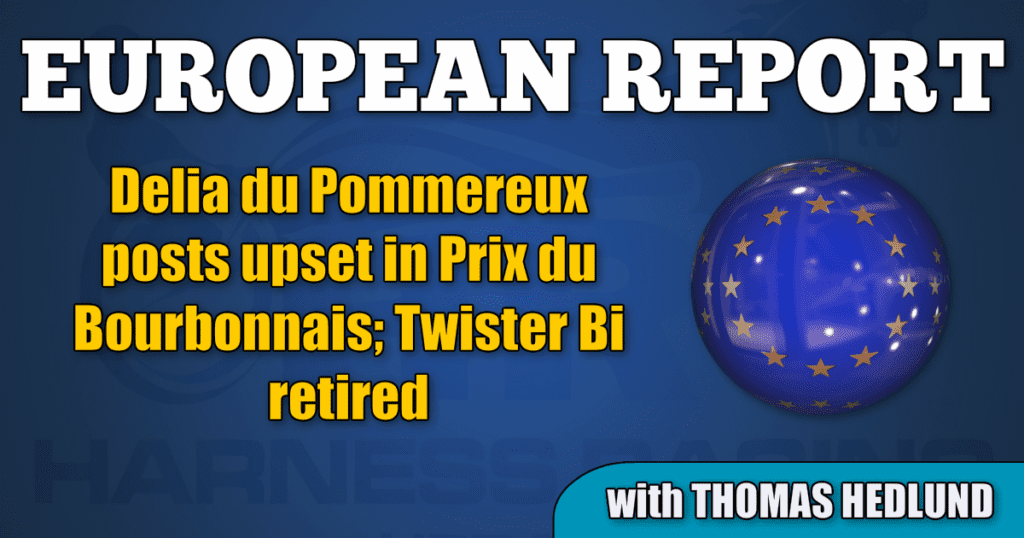 Five-year-old mare Delia du Pommereux (Niky) finished second to Davidson du Pont in the first B-race, Prix de Bretagne, in Paris three weeks ago and when it was time for the $135,000 Prix du Bourbonnais last Sunday, the Sylvain Roger trained trotter showed that she is a horse to count on when the Prix d’Amérique is contested in January.

Delia du Pommereux was served a third over trip by her driver Damien Bonne and while Bold Eagle was sent in a furious attack three wide with 5/8ths of a mile to go, Bonne took it slow with Delia du Pommereux.

Bold Eagle ran out of power in the home stretch and, obviously, the giant of French trotting the previous years, is not in the right shape at the moment. Still, a bit more than a month remains before the field is set for Prix d’Amérique and trainer Sébastien Guarato will most certainly find out how to get Bold Eagle in perfect condition for the big race in Paris, but there is no doubt that the Ready Cash son has had better preparation races than what he has shown this year.

Delia du Pommereux got her order to attack in the end of the last turn and she comfortably held strong with Belina Josselyn finishing behind her.

Bird Parker finished third and all the top three horses were, basically, ready for Prix d’Amérique even before the race since Belina Josselyn has enough money in her bank account.

The next B-race is scheduled at Vincennes on Dec. 30 and the $135,000 Prix de Bourgogne is held over 1.3 miles and an autostart will be used.

Alessandro Gocciadoro is the trainer and driver Vincenzo P Dell’Annunziata made no mistakes when he placed Axl Rose fourth on the inside during the race’s first half.

Before the last turn, Axl Rose was sent towards the leader, but got a late answer from French trotter Granon Vedaquais, which gave a cover trip throughout the turn. When Axl Rose was given the order to attack, he cruised away from his opponents and won in mile rate of 2:00.3 over 1.3 miles.

Purses being cut in France

Earlier this year, French betting company PMU announced that a saving of $340 million is necessary in the company’s administration and this week, PMU reached out with not so flattering news for the horse racing business.

According to French harness racing magazine Paris-Turf, PMU will reduce purse money by 26 million euros (approximately $29,500,000) in 2019, a ten per cent cut of what was paid out in purses during 2017.

Prize money has been high in France, owing to funded money, but now, when the betting handle reduces every year, PMU has to make this drastic action.

Career is over for world champion Twister Bi

Twister Bi, the winner of 2017 International Trot at Yonkers, has raced for the last time.

The 6-year-old son of Varenne enchanted the harness racing fans on several occasions, especially during 2017, when he won the International Trot at Yonkers, Oslo Grand Prix in Norway, Seijnäjoki Race in Finland and Ulf Thoresens Minneslopp at Jarlsberg in Norway.

Jerry Riordan trained the trotter throughout the successful years on the track and the plan was for Twister Bi to meet the world’s top trotters in France last winter. But problems with the horse’s lungs put an end to further success at the tracks and after an unsuccessful comeback in Sweden in November, new trainer Timo Nurmos has announced the horse’s retirement.

French media has announced that Voltigeur de Myrt (Opus Viervil) also has retired from racing. The 9-year-old stallion finished second to Up And Quick in Prix d’Amérique 2015 and stopped his career with life earnings of $1,595,485. Among Voltigeur de Myrt’s most prestigious victories, the $250,000 Criterium des 4 Ans and $135,000 Prix Henri Levesque can be named.

Roberto Donati trained the charismatic trotter during his whole career.