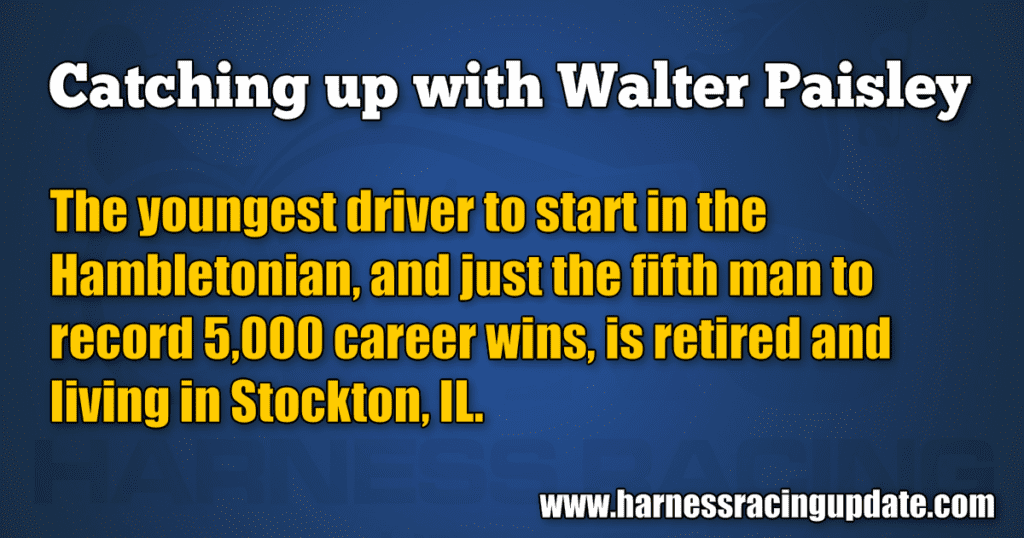 Catching up with Walter Paisley

The youngest driver to start in the Hambletonian, and just the fifth man to record 5,000 career wins, is retired and living in Stockton, IL.

Walter Paisley is 77 and retired from driving. He lives on a 25-acre farm in Stockton, IL, where oak trees are abundant, but not horses. While he’s owned 400-plus standardbreds over his lifetime, he’s now been a couple of years without any. That’s unlikely to change

“I took almost all the fences down in the last six months,” Paisley said.

He qualified two trotters at Balmoral Park on June 25, 2014, and has made no subsequent starts. His last driving wins came on Aug. 17 of the previous year.

“Morrison was a bad racetrack, probably a typical county fair racetrack,” he told HRU. “I’m thinking ‘This is gonna be bad!’” Setting his concerns aside, “Butch” Paisley reined Sober As A Judge to two winning heats (2:05 and 2:08.4) at Whiteside County Fair.

“Riccolo would race me on my Gator. He would never get beat. He would trot right along the fence every time.”

Homebred Riccolo (Northern Kid—Touch of Victory by Valley Victor) won 11 consecutive races at age three before his owner sold him. Paisley said he hung up on the overseas caller twice, assuming the Norwegian-accented voice was a telemarketing scam, but a persistent Torkel Alendal called back a third time to make an offer. The Hambletonian-eligible gelding debuted for Trond Smedshammer in a Meadowlands three-year-old open July 21, taking his lifetime-best mark in a going-away victory over a horse named Market Share.

Paisley, who was inducted into the Illinois Hall of Fame in 1982, said he had called Smedshammer to caution him about Riccolo’s ways: “I raced this horse, I raised this horse — do not leave with him!” In his Hambletonian elimination July 28, Riccolo blasted to the front from post 7, cutting the opening quarter in 27 seconds flat, then battled a first-over Stormin Normand into the stretch, where both were overtaken by closers. The Illinois-bred finished sixth, not making the final — which was won by Market Share.

While Hambletonian victory was not in the cards for Riccolo, Paisley made Hambletonian history as a driver. In 1959, the 18-year-old became the youngest ever to start in the event. His father Bill’s horse, Algiers Eblis, was 14th in the final summary of two heats. “He didn’t even belong in there, but you had to know my father,” said Walter. “(Algiers Eblis) could trot around 2:05 and that was it. He couldn’t have won if he trotted across the infield.”

At age 16, Walter wanted more than “all the mediocre work” he could find cleaning stalls and leather harness on the Maywood Park backstretch. He started driving his father’s trotter Bob McHugh at fairs. “He couldn’t go very fast, but he stayed trotting,” Walter said. “Every county had a fair back then. The first fair was Rushville and then you’d go to Champaign, Urbana.”

In 1949, Sportsman’s Park joined Maywood (est. 1946) in offering pari-mutuel harness racing. When Harry Burright was suddenly unavailable to drive Bill Paisley’s horses there, he demanded the race secretary phone the USTA with a special request: that his 17-year-old son be allowed to catch drive, or he would scratch his horses. The request was granted, added Walter: “My dad gave me a chance to drive. Believe me, we did not have money. He could have got other guys, but he put me down to drive.”

Opportunities mounted alongside unorthodox approaches by the would-be catch driver.

“I told (Sportsman’s Park race secretary) Pete Langley I’d like to get catch drives. He said, ‘I’ll put up a sign here that you’re available for catch drives.’ He put up a sign, but probably chuckled.” Catch drives did not result. “Pete said, ‘Why don’t you go to a smaller track?’ So I went to Northfield, Ohio.”

Paisley returned to Illinois with $7,000 in purse winnings and money from selling horses at Northfield. He mailed letters to Billy Haughton, Joe O’Brien, Del Miller, and other top horsemen, asking whether they would take him on as second trainer. At the Lexington yearling sale, Paisley spotted them together and saw an opportunity to introduce himself, in person.

“It was funny — then we all became friends on a first-name basis. Haughton sent me horses to race,” said Paisley. O’Brien gave him a drive on Armbro Nesbit, calling Paisley over in the paddock to advise on the temperamental pacer: “He’ll either be first or last. Don’t get him caught in, he’ll kill someone.” They won a 1973 U.S. Pacing Championship leg at Sportsman’s Park instead.

Paisley’s youth made him a rarity. “All the top drivers were in their forties and fifties,” he said. There were few opportunities for an aspiring catch driver: “When I was 29, I had won 140-180 races. Not very many.” The gradual start didn’t prevent him from becoming the fifth driver in North America to reach 5,000 wins, a milestone attained driving Jano Leta Jan. 5, 1990 at Hawthorne. With his parents and brother watching, he received a commemorative bracelet with the number in diamonds. “Hawthorne was always very generous,” said Paisley. “You talk to anyone who raced in Chicago.”

He initially retired in 1993, after winning one particular battle. Paisley, then on the Illinois Racing Board, was among drivers being ripped off: “At that time, I had $80,000 on the books — people would ship in, you’d drive their horse, but you’d never see them or their horse again.” He devised a policy with other top drivers: “If anyone wants to use any of these drivers, they have to agree to have their payment come out of the purse account.”

The strategy worked: “In three days, we were getting paid.”

Paisley began driving at fairs, and now watches with concern when fair racing is replaced by “dirt-track derby” motorsports. “Nobody can relate now,” said the horseman, who comes from a non-racing family. If his father hadn’t been the son of an Iowa workhorse dealer, already primed to enjoy the newly-opened Maywood Park, Walter may have never encountered, let alone related to, harness racing.