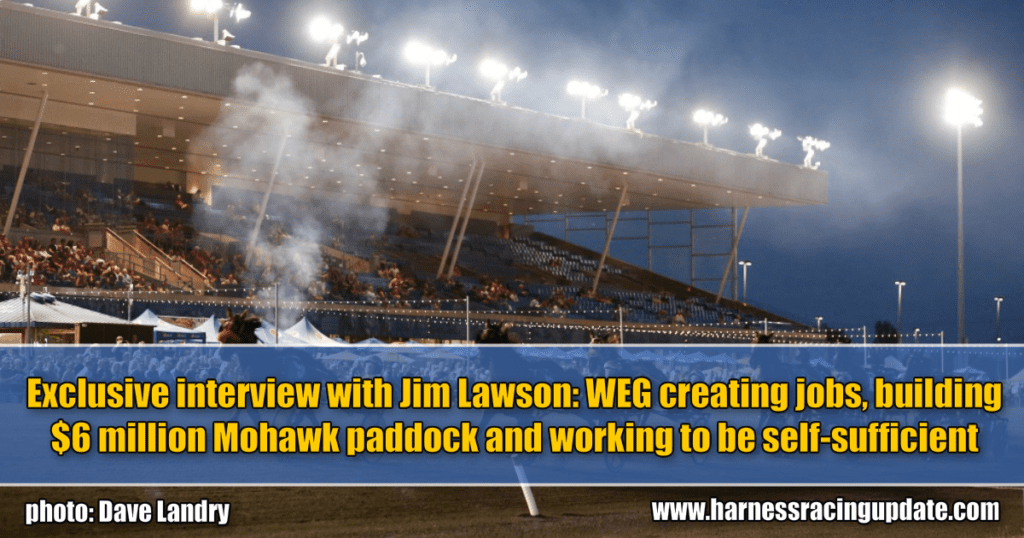 Just some of the revelations from Woodbine Entertainment Group CEO Jim Lawson in an exclusive state-of-the-industry interview with HRU.

Among the highlights of an exclusive state-of-the-industry conversation with Woodbine Entertainment Group (WEG) CEO Jim Lawson is news that the Toronto-based racing company is investing $6 million in expanding the paddock at Woodbine Mohawk Park, has hired close to 600 people this year and is working to be completely off the government dime and be self-sufficient by the summer of 2022.

Lawson said he feel particularly good about the jobs created at WEG in 2018.

“We now employ close to 2,000 full-time equivalents, plus the 3,000 people that work on the backstretch and then people that work in the surrounding area at Mohawk. There are 10,000-15,000 direct people that rely on Woodbine,” Lawson said.

He said the contract has been signed to start the paddock expansion and the hope is the work will be completed in time to play host to the Breeders Crown in October of 2019.

“It will be great for a whole lot of reasons in terms of the stall space,” Lawson said. “Horses will not have to ship to the back 40 anymore for Lasix and a lot of things will be great for horsepeople and the horses. I’m really excited about getting that project completed.”

The $6 million expenditure is on top of some $10 million WEG has already spent to winterize Mohawk, which this year became the year-round home of harness racing after more than 20 years racing at Woodbine Racetrack during the coldest months.

“It’s been a very successful transition to date. I appreciate as I say that, that we have our first full winter to go through, but… with that winterization, it gave us the opportunity to refurbish the dining room and give better sight views,” Lawson said. “We opened another kitchen, and the Mohawk Harvest Kitchen was just a spectacular success and sold out the majority of the time since it opened over the summer and fall months. My sense, from being there pretty regularly, is there’s just been great momentum. I think (Woodbine Mohawk Park president) Jessica Buckley is doing a great job and I think that’s been important for the people at Mohawk to have, what I’ll call, a self-sustained unit and leader there.

“We’re working very hard with the benefit of year-round racing now to establish Mohawk as that go-to place.

“We specifically timed this with the cooperation of the Hambletonian Society to really position Mohawk as center ice in the standardbred world. We think it’s an opportunity to showcase what we’ve done out there… getting the standardbred paddock, completing the necessary changes, adding the guest suites and just a better environment to host the Breeders Crown.”

GETTING OFF GOVERNMENT DIME

Under the terms of a government funding arrangement that provides nearly $100 million a year to the province’s horse racing industry, Lawson said Woodbine has to return the amount it receives as a landlord for gaming halls at both Woodbine and Mohawk.

“Every dollar we get, and will get, under gaming revenue and rent, the government takes away a dollar, so there’s a concept — and I don’t mind saying this publicly — of clawing back. What the government effectively has done is claw back our funding.

“It does that because, when we negotiated the funding arrangement… the government was not about to give us all that funding, plus let us collect rent once these gaming facilities are up and running.

Lawson believes an aggressive land development plan at both sites will lead to WEG, “repaying every dollar we get, and Woodbine will be self-sustaining on its own. That’s the reason for the property development.”

Lawson said the focus on development is a sign of a strengthened commitment to horse racing, not a sign WEG is distancing itself from racing.

“We understand the direction that we’re going in and we’re trying to unlock the value of the lands to make sure that there is this investment in horse racing. This property development is going to be used to grow purses and continue us to invest in infrastructure… Just at Mohawk alone… (we’re) investing $16 million in winterization. In order to be able to keep up that sort of investment, we’re going to have to generate cash flow from our real estate to do it because the economics of this business, quite frankly, do not support that sort of sustainability and growth, based on the pari-mutuel funding model that we have today.

“Our only mission is to support and grow horse racing in Ontario. That mission has not changed, will not change. There’s been a changing landscape, but we, as a company and management team and fully supported by our board, are committed to that mission of the core business. That’s all we can do, that’s all we’re doing and, as to how we support a healthy horse racing industry – we’re investing in our future and I think that’s the key thing that people don’t appreciate.”

WEG also plays a key leadership role in the province through its subsidiary Ontario Racing Management (ORM). Previously, ORM ran the Standardbred Alliance compromised of eight key harness tracks. The success of that venture led the government to entrust ORM with managing virtually all racing in the province — including the two thoroughbred tracks and the lone quarter horse track, but Lawson is quick to stress that WEG puts tremendous capital into ORM and that ORM reports directly to the industry alliance called Ontario Racing (OR), not WEG.

“Ontario Racing Management costs millions to run when you think of the personnel to begin with, the infrastructure that’s been built in terms of the (simulcast) home-market area that benefits everyone; all the investment in the off-track wagering that we do, running the tote systems for everyone, collecting the money, paying out… I don’t think people have any appreciation of the capital that we put into it for everyone’s benefit.”

Despite making a concerted effort to become self-sufficient in three or four years, Lawson said WEG is still committed to playing a leadership role in OR for years to come.

“The infrastructure has been set up for us to play a role and support, with our infrastructure, Ontario Racing and that’s what we will continue to do. We’re committed to doing that. So, when I say that we run Ontario Racing Management at a significant deficit, we are committed to continuing that lead role in that example, notwithstanding that we are very much hoping to not be funded by the (provincial) funding agreement, by, I’m projecting, the summer of 2022.”

All of which is why Lawson bristles slightly when he hears people not only question WEG’s commitment to racing, but also point to the makeup of the WEG board and suggest there are fewer “horsepeople” on the board helping to shape the company’s direction.

“The fact that we have skill sets that we recruited people (onto our board) from the marketing area, the property development area, they all came into this knowing and appreciating – and I can tell you they voiced it as strongly as what you deem the horse racing people – they are there to help us figure out how to market, how to develop, all with a view to filling our mission of supporting horse racing.

“Just recently we’ve added Ed Hanna, he’s pretty much been the backbone of planning and strategy and wagering technology at the Stronach racetracks (Magna Entertainment) for the past 20 years. People know just how important that is in the international stage and the wagering stage to have someone with Ed Hanna’s experience in the room now. Ed is not what your people or the people on the backstretch here would think of as a horse person, but he knows the business from a wagering and technology and innovation standpoint as well as anyone in North America.

“We really do pay attention to the fact that we need different skill sets on the board and we are required to do so under our governance plan. We’re not short on horsepeople. I know people think that, but Clay Horner and Doug Millard and John Fielding are pretty strong horsepeople, believe me,” Lawson said, laughing.