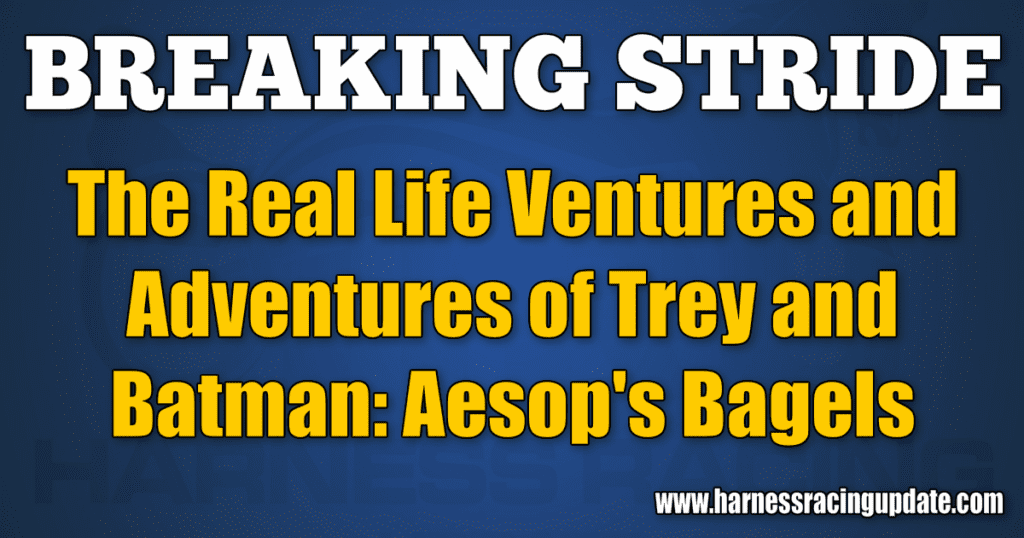 The day started out weird and then got weirder.

The start-up entrepreneur from Silicon Valley asked me to point my Prius to the small town of West Branch, more specifically, to Aesop’s Bagels and Eggs. Batman rarely eats breakfast. He usually starts his day with a large plastic cup of slurries with ingredients like kale, papyrus and yak milk. Then he takes long runs where he thinks deep thoughts.

On the 20-minute drive through falling leaves, we talked about our yearling purchase and his plans to build a barn on his family farm. Aesop’s Bagels was a family operation in a converted hardware store on a half-vacant Main Street. When he pushed the door open, a bell tinkled, and each of the nine patrons swiveled to eye up the strangers. A skinny waitress with orange streaks in her straight brown hair, wearing an OSU sweatshirt and oversized glasses placed her hands on her hips and said, “Well, hello again.”

Obviously, he had previously made the scene. Why, when, or how a billionaire who ate healthily had recently visited Aesop’s was a mystery. As I struggled to wrap my mind around things, he led us to a red booth with cracked red vinyl seats and a Formica tabletop with gold speckles.

Edie brought over two heavy mugs of coffee and thumped them down. Without asking, Batman said, “Two specials, scrambled.”

Edie headed to the kitchen. I reached for a sugar packet and whispered, “You’ve been here?”

He shrugged me off and began chattered about pending gambling legislation and how various laws would affect horseracing. My mind wandered, it happens. Later, when Edie dropped off the check, Batman pushed it towards me. The first time in over a dozen food stops he did not pick up the check.

Our bill, written longhand in a loopy scroll, totaled $18.36. I left a five on the table, walked to the old style cash register perched on a glass case filled with prehistoric-looking Mars candy bars and a bouquet of lollipops. I handed Edie a twenty, she gave me change, and I dropped the $1.64 into a green plastic sprinkling can next to the register.

While Edie was doing the math I noticed a can with a yellow heart on one side and a photo of a teenage girl taped to the other side. I read a half-sheet of paper Scotch-taped to the glass counter next to the can. The spelling and grammar were shaky, but the meaning was clear.
MARY JANE MCILMORE – AGE 21, ANOTHER FENTINAL VICTIM. PLEASE DONATE. ALL FUNDS GO TO THE HATHAWAY RECOVERY SHELTER.

We walked out and got into my car.

“People want to give. The science behind giving is clear. It’s powerful stuff.”

I spread my hands, “What is this — psychology class?”

We fastened our seatbelts and looked down Main Street. After a beat, he asked, “Let me ask you a question. How do you gamble on horse races?”

“On my iPad, hooked to my flat screen. I’m set up on a couple of sites.”

I fired up my iPad and logged in. Without speaking, he watched intently as I randomly pulled up a race about to go off at The Meadows and bet $5 to win on a pacer named Share The Gold. We leaned back and watched the race. Astonishingly, the horse came up the rail in the stretch and won.

I was pumped. We high fived, “Batman, I’m $21.40 closer to your billion. The money I just won will show up in that box.” I pointed to – FUNDS ON DEPOSIT AVAILABLE.”

He pointed to my screen and asked, “What if there was another box or two on your screen? What if they looked like this?”

He pulled out his phone, tapped three times, and handed me a simple sketch with a few words and numbers.

I handed his phone back.

He finished the lesson, “Trey, five minutes ago you dropped money into that watering can. You did this for many complex reasons. One of those reasons, the strongest reason, was that donating made you feel good. Giving a couple of dollars made you feel good on many levels. Chemicals were released in your brain.”

“They wouldn’t be the first. So, you think this could transfer to the world of gambling on horses?”

“Absolutely, you just won a race, you feel great. The money is an abstraction. If your wagering account is linked to the organization, as in the little example I drew up, 5% of the $21.40, $1.07, would go to Alzheimer’s research. Right now, at this moment, would you enjoy seeing $1.07 going to charity?”

I didn’t need time to think, “Yeah, sure, I hate that friggin disease.”

“Trey, the concept is not just about charity, it is about you, about the gambler. The idea is based on predictive analytics. Your win would be an enhanced experience and you would feel good. That small donation has a dozen upsides, and because it is voluntary, the process does no harm.”

I scratched my head and said, “So you’re messing with my mind, sending subliminal triggers.”

“Of course. It’s hard to quantify, but if people set up voluntary accounts such as this, it could very well make some people more likely to gamble on races, to win for the team.”

I replied, “You better not make it worse. Remember, a huge chunk is already taken out of every winning dollar.”

“It should only help. Direct diversion to the cause selected from a menu would be simple and legal.”

I sighed, “Where do you get this stuff?”

He shrugged, “Let me show you a list of 10 reasons this could encourage people to gamble on horse racing.”

Before he could spew more insanity, his phone chirped. He plugged in his earbuds and said, “I need to take this. Head back to my house. I have a few things to tell you that will blow your mind.”

I pulled onto empty Main Street.