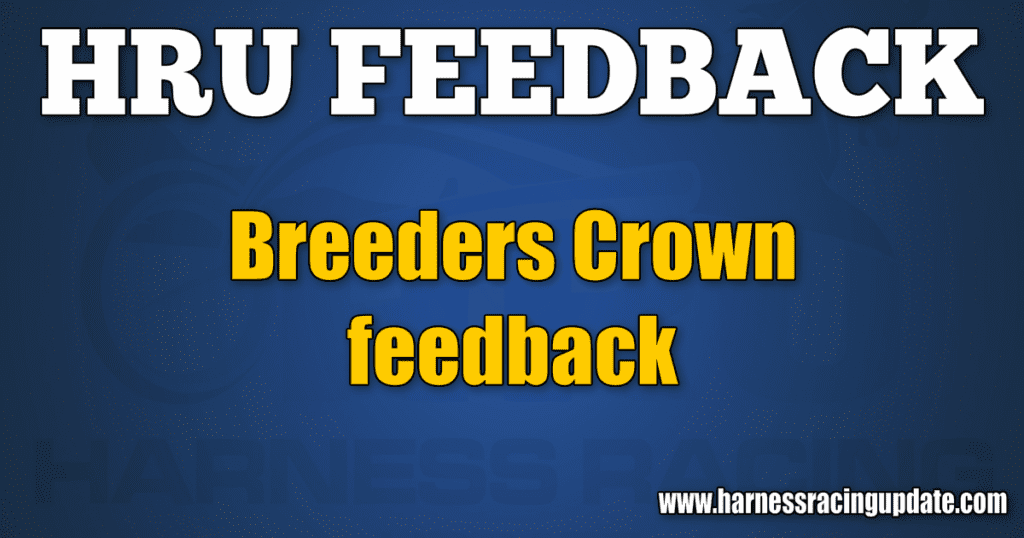 Being raised on Long Island, I have attended harness races for about 58 years. I have attended many Breeders Crown races including the ones held at Pocono Downs. Having the greatest respect and admiration for both John Campbell and Moira Fanning, I have the following comments: [1] While I understand that the Breeders Crown is, to a great measure, awarded to tracks that can make a substantial financial commitment to the purses, in view of the size of the purses, quality of the horses and importance for end of the year honors, the Breeders Crown races should be run on a 7/8 or one mile track. Out of 12 races at Pocono, not one winner came from outside the five post. I understand that if you win an elimination race you will draw from the five post in, but there were some very good horses from the six post out and not one of them could win a race That is ridiculous; [2] If The Breeders Crown are going to be run at the end of October or in November, the races should be run at tracks that have enclosed grandstands. I find Pocono to be very fan user unfriendly and the last 2 Breeders Crowns there were on nights that were cold and rainy. While the weather can’t be controlled, at least at a track with an enclosed grandstand you can sit in comfort; i.e., Hoosier Park, Meadowlands, or Mohawk. Either sitting in a tent or going out to see a race and then having to go back into a or a tent is not appealing. The Breeders Crown deserves better.

As reported in your coverage of Breeder’s Crown night at Mohegan Sun Pocono, it was a terrific night of racing. Each event featured head to head battles of the top horses in their respective class. Many owners, breeders, trainers and drivers had good reason to celebrate.

It was a great night just to watch as a fan of the sport.

However, as a bettor with no more than a hundred bucks in his pocket, it was maybe not so great. Pocono’s betting menu was straight out of 1983: win/place/show, exacta/trifecta/superfecta for every race. (I don’t play trifectas and superfectas.) Not one Pick 3 on the entire card? No 50-cent minimum offers? (Yes, I have become spoiled by what is offered routinely any day of the week at other tracks). There were only $1-minimum bets on the scant couple of Pick 4’s and one Pick 5 that were offered, and the $65 and $106 winners in the middle of the card ensured that most bettors taking a shot at those were wiped out in a hurry.

It would have killed them to offer even a couple of extra daily doubles? One or two Pick 3’s? Sorry, my money stayed in my pocket on what should have been one of the sport’s biggest nights for betting handle.