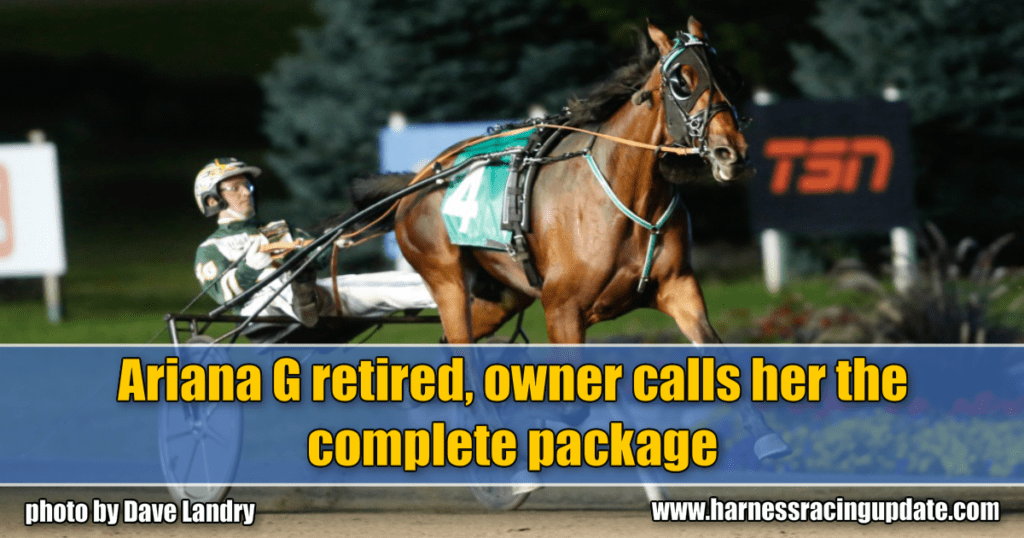 Katz on Ariana G: “She combined almost everything that you’d want in a filly”

The homebred daughter of Muscle Hill—Cantab It All was retired from racing this week after earning just shy of $2.5 million on the track.

Marvin Katz said it’s too early to speculate whom Ariana G will be bred to now that the 4-year-old star trotting mare has been retired from racing — particularly since he and his ownership partner Al Libfeld hardly have had time, yet, to process all the daughter of Muscle Hill out of Cantab It All accomplished on the track.

“It’s interesting… I’ve been fortunate enough to have participated in some of the great horses we’ve seen in the last decade – Captaintreacherous, Father Patrick, Ariana G, to mention a few. In the cases of those three, you really reflect on the accomplishments more after it’s over than while it’s going on, certainly while the season is going on, because it becomes a blur. You’re going from one race to the next race and you’re worried about all the things – the post positions, the tracks, the well-being of the horse – and when you have the chance to reflect back on it, I’ve just begun to really reflect on the magnificence of Ariana G. From really early on, as a 2-year-old, in the races at the Meadowlands, I knew she was exceptional. (Trainer) Jimmy (Takter) knew it. (Driver) Yannick (Gingras) knew it. But it’s almost more afterwards, when you have a chance to reflect on it,” Katz said.

Katz, from Toronto, and Libfeld, from nearby Pickering, ON, not only owned Ariana G, they bred the mare, as well. She ends her racing career with a record of 26-4-2 in 40 starts, earnings of $2, 465,459 and a mark of 1:50.2 taken this year at the Meadowlands while beating the boys in the $250,000 Graduate final. Ariana G was the voted the divisional champion in both Canada and the United States at both 2 and 3.

“She was unique to me, in that she combined almost everything that you’d want in a filly. She has a great pedigree. She has an incredible high speed that she can carry for a long distance and she has grace, talent and charisma,” Katz said. “Sometimes you’ll get fillies that are not big and they just overcome it, or those built like a tank that overcome it. She was a really good-sized filly, but very sleek in body style. Ferrari is a good way of describing her. I heard Jimmy use that term often about her. She really had incredible high speed, but the cardiovascular system and the ability to carry it for a long distance. She was so manageable. She was not high-strung. You could race her out of the hole, cut the mile, you could change your mind during the race – that’s hard to do for fillies at a young age and they were able to do that with her.”

Katz said Ariana G simply did what “most horses can’t do and don’t.”

“That’s really what makes them so extraordinary, with each experience so unique. Poor posts, bad trips, bad conditions, they just sail through and they just win. They just win,” Katz said.

Even more incredible, Ariana G is the second straight filly out of Cantab It All to put up exceptional results on the track.

“One of the things that people have forgotten is that she was preceded by a magnificent filly called All The Time, who did nothing short of being a tick under a million dollars, won the Breeders Crown, won the Hambletonian Oaks and survived a massive, life-threatening event with colic. She survived emergency surgery to come back and compete in the Breeders Crown as a 3-year-old, even though she had surgery seven weeks prior. It makes it an even more enhanced experience because (Ariana G’s) sister, who was magnificent, preceded her,” Katz said.

Ariana G, named for pop star Ariana Grande — Katz and his wife, Lynne, are both fans — was nearly flawless at 2 and 3, winning the Breeders Crown both years. She posted a record of 9-1-0 in 11 starts as a rookie and a record of 12-2-1 in 15 outings at 3. This year, going up against a tough group of older trotters — both male and female — Ariana G still earned just shy of $600,000 with a record of 5-1-1 in 14 starts. Her signature victories — apart from the Breeders Crown wins — include the Hambletonian Oaks and Elegnatimage in 2017 and the Jim Doherty Memorial and Peaceful Way in 2016.