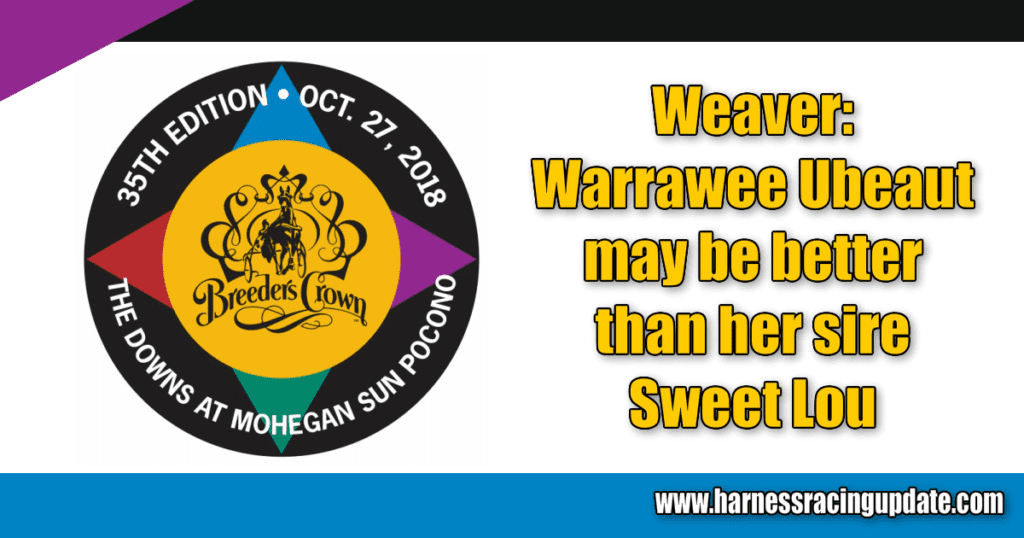 Weaver: Warrawee Ubeaut may be better than her sire Sweet Lou

As Warrawee Ubeaut headed back to the paddock following her impressive 1:52.3 victory in the $600,000 2-year-old pacing filly Breeders Crown Final, co-owner Mark Weaver was comparing her to Sweet Lou.

The comparison was obvious, the filly’s sire had also won his 2011 2-year-old Breeders Crown final before going on to earn $3.4 million and take a mark of 1:47 (over a much drier Pocono Downs oval in June of 2014), but Weaver was saying Warrawee Ubeaut is better.

“She’s kind of like Lou, just bigger, stronger, faster,” said Weaver of the filly, whose dam is Apaches Fame mare Great Memories. “In a way, Lou’s Breeders Crown — he just kind of settled, moved to the front up the backstretch and just powered away — this was kind of the same type of race. Maybe not as effortlessly as Lou did, and the weather is a little worse here, but I just love her versatility.”

Unlike Sweet Lou, Warrawee Ubeaut never really got a chance to settle in her quest for the Crown. Starting from Post 4 over a rain-soaked Pocono Downs oval rated one second slower than normal, the filly got away a parked out seventh as Queen Of The Pride and Tony Hall led the field to a :26.2 quarter. Behind one elimination winner, St Somewhere, and with the other, Tall Drink Hanover, pinned on his left, driver Yannick Gingras decided his best move was to carry on with Warrawee Ubeaut.

The 2-year-old pacing filly division has been impressive all year and nothing changed on Crown night. The lead changes were fast and furious. Zero Tolerance and David Miller took over from early leader Queen Of The Pride and then yielded to a charging St Somewhere and Matt Kakaley just before the :54.2 half. Left uncovered, Warrawee Ubeaut powered to the front and Gingras kept his foot on the accelerator as the fan favourite rolled on to a 1:22.4 three-quarters. Prescient Beauty and Doug McNair, who had been on Warrawee Ubeaut’s back from the start, took a quick tuck coming off the final turn before stepping out to challenge in the stretch and Zero Tolerance took aim on the leader from the inside lane, but Warrawee Ubeaut held on for a one-half length victory in 1:52.3.

“It was a weird race, how it set up. Usually you’re not moving from seventh to first from the quarter, but I think Yannick recognized an opportunity to put other horses in bad spots and made a good move,” said trainer Ron Burke. “She didn’t pace home that great, but she fought to the wire and she had been used hard. It’s a victory. I think it shows she’s a resilient horse and down the road she will be a very, very good horse.”

It was the second straight freshman pacing filly Breeders Crown win for Burke and Gingras, who teamed up with Youaremycandygirl in the 2017 edition.

The win delivered a bit of redemption to Gingras, who said repeatedly that he had given Warrawee Ubeaut the worst possible drive in the elimination, where she finished a tired fourth after challenging Tall Drink Hanover first-up.

“Honestly, last week, the only thing that got her beat is a bad drive. I drove her as bad as a guy could drive a horse,” said Gingras. “And I told the girl that takes care of her – she does a great job – I told her, ‘Don’t worry about it,’ as soon as we drew a good post, ‘I’ll get the job done next week in the Final.’ I only told her, I’m not as ballsy as David Miller telling the whole world, but I was very confident in the filly.”
Bred and raised at Warrawee Farm in Rockwood, ON, Warrawee Ubeaut was purchased for $70,000 from the 2017 Lexington Selected Yearling Sale by Burke Racing Stable LLC of Fredericktown, PA, Phillip Collura of Mountain Top, PA, the partnership of J And T Silva and Purnel And Libby of Delray Beach, FL, and Weaver Bruscemi of Canonsburg, PA. Through 11 lifetime starts the filly now has seven wins, one second, one third and earnings of $602,393 and she may not be finished.

“We’re talking about continuing to race her next month, but if I have a vote I think she’s done enough and I think that wraps up filly of the year,” noted Weaver.

Weighing in Warrawee Ubeaut’s favour when it comes to freshman pacing filly of the year honors is the world record she logged at Red Mile on Oct. 5. That 1:48.3 triumph in a division of the International Stallion Stakes made her the fastest two-year-old in the history of harness racing, period. No other two-year-old, colt, gelding or filly, has logged a faster mile, on any size of track.

“I was looking the other day. Of the fastest 25 two-year-olds (miles) ever, only one is by a filly and it’s her, Warrawee Ubeaut. The other 24 were all colts and, of course, she’s the fastest,” said Weaver. “It’s very cool, very rewarding. Maybe the most rewarding win I’ve ever had.”