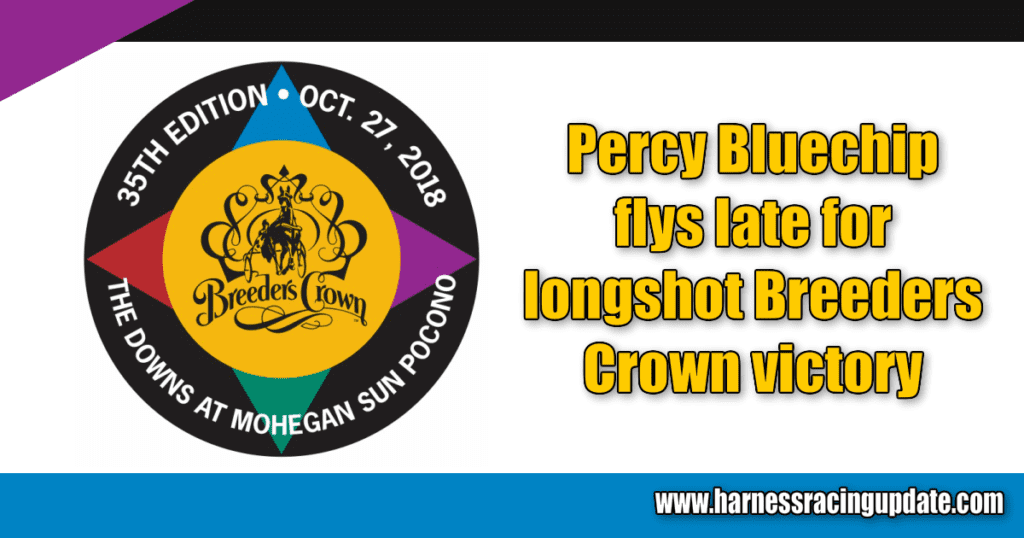 It was the duel of the division from the first quarter to the finish line, but it was not the dueling duo that made history as Percy Bluechip took advantage of the grueling head-to-head battle between Youaremycandygirl and Kissin In The Sand to charge wide late and win the $500,000 Breeders Crown 3-year-old filly pace final on Oct. 27 at The Downs at Mohegan Pocono.

Alexa’s Power shot out for the lead from the inside, looking for an early advantage as her two top foes left the gate from her right. Youaremycandygirl also left alertly, taking a spot on the inside behind Alexa’s Power while Kissin In The Sand (who took a bye for the elimination and showed up for the final with a week’s rest) was three wide at the start but found a spot third on the inside before the first of the three turns.

The first quarter was reflected brightly as the two fillies rolled in the two tiers in :25.4.

Alexa’s Power was getting a good trip drafting behind her two season-long foes and stayed put with the cover as the duel ensued to a half in :53.3. Under no pressure, however, Alexa’s Power began to lose her breath while Kissin In The Sand refused to stop pressuring Youaremycandygirl through a fiery 1:22.2 three-quarters.

Meanwhile, a sharp three-wide move by Percy Bluechip shot her ahead of a weary field and as the finish line approached was able to swoop by the catfighttin’ fillies that cut all of the fractions.

The time for the mile was 1:51.1, a lifetime mark for the daughter of Shadow Play—Advantest (by Artsplace).

Kissin In The Sand got second off of the tough overland trip as Youaremycandygirl was passed late by Dance Blue for third.

It was driver Matt Kakaley’s first Breeders Crown win in a season that began with a driving accident at Yonkers Raceway. His injury threatened the remainder of the season but Matt bounced back to make it to the championship series (he also won his second Breeders Crown race later in the evening with Dorsoduro Hanover). He called his Crown win “absolutely amazing.”

Matt was well aware of his shot to win when the big duel sparked blazing fractions. “It was the only way I could win the race,” he said, “if they duked it out on the lead… I slid out and moved (Percy Bluechip) out at the top of the stretch. I actually broke my whip at the top of the stretch but I guess I didn’t need it… Down the backside, I said, ‘This is it, I’ve got a big shot’ and I was very pleased. She kept on good and got the job done.”

Kakaley said ending a season so well that started so badly is “a dream come true.”

“It was pretty hairy there for a while with Matt’s eyesight,” said Percy Bluechip’s co-owner Mark Weaver. “We were concerned, not just for Matt as a driver, but for Matt as a person and a father; he just had a kid when it happened.”

As for Percy Bluechip’s victory, Weaver said, “I think the off track helped her. She’s a big powerful filly and she kept plugging… She was a super filly last year and was just kind of going through a little lull this year. She’s worth quite a bit as a broodmare and we thought down the road, if she didn’t work out as a racehorse, we would breed her to Sweet Lou. But she has been super.

On his way back to driving regularly, Kakaley steered Dorsoduro Hanover to a big victory. “He wins the Adios,” Weaver said, “and now this. He’s as loyal as they come and I’m thrilled to see Matt have success, especially on the big stage. He deserves it.”

Nancy Johansson trains Kissin In The Sand, who held on gamely for second. She said, “Obviously you want your filly to win. There is nothing I can say negatively about her. It’s the end of the season and she was great. We get to come back next year and try again. She’s getting better because last year she didn’t even make the final of the Breeders Crown. We’re getting there. Third time’s a charm.”

Nancy also trains Dance Blue, who surprisingly got third. “I didn’t see where she came from,” said Nancy, “because I was busy watching Kissin.’ But Dance Blue finishing third? I have to be happy with that.”