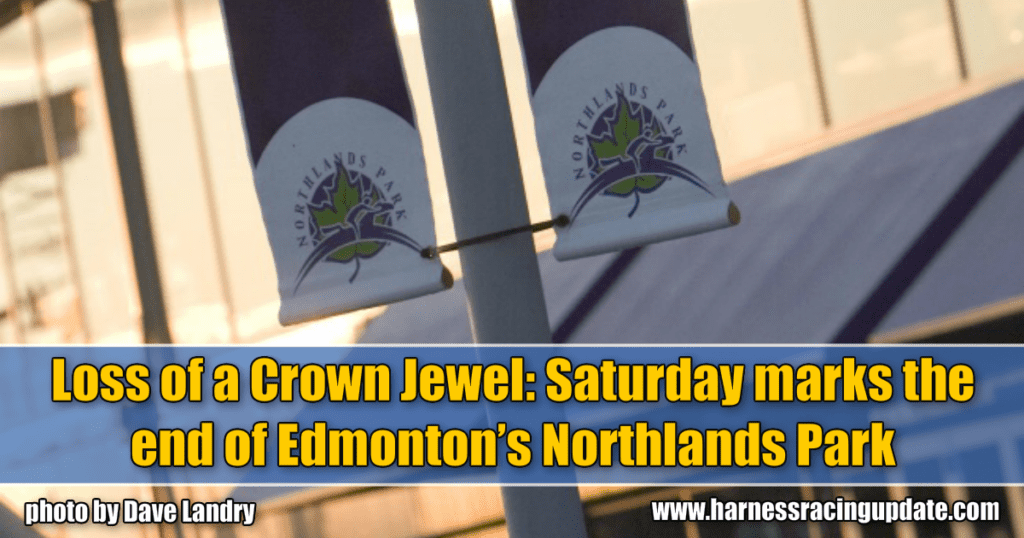 Loss of a Crown Jewel: The End of Edmonton’s Northlands Park

Saturday marks the final race at Edmonton’s dual-breed Northlands Park after 139 years of horse racing on the site. A new mile track opens in the city next year, but not before we look back on a track that twice played host to the Breeders Crown and once was a leader in per-capita wagering.

The occasion of the 2018 Breeders Crown finals also marks the final race date — ever — for Northlands Park. The Edmonton, AB complex played host to the Breeders Crown’s first-ever “glamor division” final on Oct. 14, 1984. Before its present format, Breeders Crown events were distributed among multiple tracks (eight different venues in 1984; nine in 1985).

Les Butler was hired as racing manager at Northlands in 1995. He left around 15 years later, having risen to vice-president of the multi-faceted Northlands organization, which then included the Edmonton Oilers’ home ice NHL arena, Northlands Coliseum (renamed Rexall Place), plus a convention centre and the large racetrack facility.

In 1984, he was training horses in British Columbia and experienced the Breeders Crown alongside his peers at the track: “It was a big deal. Racing stopped in BC to watch. I watched it in the old Cloverdale clubhouse.” There was an added local development that brought additional drama to the inaugural 3-year-old colt pace: “BC had a horse in that race, Hy Class Minbar, who flattened the tire on Ron Waples’ sulky. It was Ron Waples’ only objection, ever.”

Announcer Larry Ross observed at the start of the inaugural Breeders Crown sophomore colt pace that not only was it “the richest race in Canada,” but its depth of talent also justified the $539,825 (Cdn.) purse. As the field went behind the gate he declared, “It would be an understatement to say that the track record for 3-year-old colts, of 1:57.1, will fall in this race.”

A week of racing-related celebrations set the stage for the 1984 sophomore male pacing showdown, one in which Northlands’ divisional record-holder was certain to figure prominently. A track record 9,266 spectators witnessed Gord and Ila Rumpel’s Alberta-based On the Road Again sparring with leader Guts to the :57 half, but Troublemaker was poised to spring from second-over at the three-quarter pole for Bill O’Donnell. Troublemaker paced on to a five open-lengths victory over Guts in 1:56f, becoming the first Breeders Crown champion of his age, gait and sex.

The following year, it was Northlands’ sophomore distaff record (1:56.3f) under threat as the best 3-year-old filly pacers travelled to Edmonton for their Breeders Crown. Steinam surged to the lead instantly, with Amneris finally passing her by the :28.1 opening quarter. Amneris was stung in a photo finish — and new divisional track record (1:55.4f) — that went to pocket-sitting rival Steinam and driver William “Buddy” Gilmour.

There was a haughtiness at Northlands that both lured and infuriated wagering clientele and horsepeople in its heyday. Butler said when he left casino management in Regina to become racing manager in Edmonton, he attempted to improve communication with the public. “Northlands Park was a very arrogant place,” he said. “When we took their races (in Saskatchewan) for very limited inter-track, they wouldn’t answer the phone — ‘Queensbury Downs? Marquis Downs? Who’s that?’”

The attitude derived in part from the track’s illustrious past — Artsplace even concluded his celebrated career at Northlands, winning the Stewart Fraser Memorial for John Campbell in 1:53.1f on Oct. 17, 1992. An air of benevolent elitism stemmed from the not-for-profit Northlands organization which owned and ran it. Northlands itself began as an agricultural society in 1879, before the city of Edmonton or province of Alberta existed. The dual-breed track had conducted harness racing since 1961, converting from original half-mile dimensions to the current five-eighths in 1974. “I wouldn’t have gone anywhere else, because long before I came, it was very well respected. Edmonton is the best betting per capita of any place in Canada,” said Butler.

He fought to bring slot machines to Northlands Park in 1995, after he had helped bring them to Regina. “In 1996, we opened a slot room. There was a pretty ugly meeting,” Butler told HRU. “The AGLC (Alberta Gaming and Liquor Commission) said, ‘Nah, we don’t want to give them to you. Why should we support racing?’” he recalled. “Our answer was simple — ‘You built us up.’ Governments gave us exclusive rights to provide gaming, then they brought in a product that would decimate us.”

Slot machines were unceremoniously dumped at the track, with no infrastructure yet in place to match their luxurious casino settings elsewhere in the province. “AGLC COO Norm Peterson said, ‘You want slots? You have 30 days to put ‘em in,’ but we can’t just drop them off in the basement and expect people to play them,” said Butler. He praised prominent racehorse owners Gord Wilson (thoroughbred) and Sam Johnston (standardbred) for their dedicated work to make slots a reality at Northlands Park: “Wilson got the (bank) loan from CIBC to renovate the building; Johnston cleared the way administratively.”

Racing nonetheless remained under threat as the agricultural roots of the Northlands organization faded. “I was always under pressure from the president or the board to get rid of racing,” said Butler. “There was always that pressure.”

The former racetrack executive added that he found it “absurd” that the Horse Racing Alberta (HRA) licensing committee sought out new racetrack proposals for both Calgary and Edmonton markets a decade ago, which “led to Stampede Park’s closure and really applies to the current situation with Northlands.” (Stampede Park exited the harness racing business in 2008.)

To continue to host both breeds at Northlands Park, massive investment — by a consultant’s 2009 estimate, $40M (Cdn.) — would have been needed. “We would have had to move Wayne Gretzky Drive and the light rail transit, or build a kite-shaped track to build a mile track (for thoroughbreds),” explained Butler. “And what do you think the chances of that were? We could have expanded the track to seven furlongs, but in doing so we couldn’t expand the turns. We would’ve spent a whole lot of money and we still wouldn’t have solved the problem of five-eighths-mile turns. Because of this, for a number of years, and because there were no other applicants for a racetrack in Edmonton, HRA gave us a temporary one-year license.”

He resigned from Northlands in 2009, discouraged by the politics: “There was too much fighting, infighting in our offices, lack of support in our business office, HRA was falling apart. Northlands’ board was not supportive of racing at that time.”

In April 2016, the organization’s president announced a “Northlands Vision 2020” strategic plan, indicating intent to remove all horse racing by the end of that year. Tim Reid described transforming the 52-acre Northlands Park property into a $45-million (Cdn.) outdoor concert/events venue. Butler, though no longer involved by this time, opposed the about-face from Northlands’ “core purpose and core value.”

“Moving to a small board from large, they lost their social license in the community; they also lost their agriculture focus,” he said.

Last September, Edmonton City Council passed a motion to foreclose on Northlands’ debt and take ownership of its assets, including Northlands Park. Now the city will decide the property’s future, but racing had already been erased from the long-range plan by the original owner. There has been no plan announced for the property. “I believe Rexall [Place] will be torn down and become low income high-rise housing,” said Butler. The racetrack? “That’s a good question. I believe there are some encumbrances on that property. There are only some uses allowed.”

The former Northlands vice president said he was disappointed that more was not done to keep the racing side operational: “HRA didn’t lobby the civic government, nor did they lobby the provincial government to intercede and preserve Northlands as a racetrack.” On-site casino expansion and intent to save racing could have kept it viable, in his view: “It’s absolutely a perfect facility for racing. It’s got the capacity to create a grand day. I’m nostalgic, but not naive.”

Speaking of nostalgia: The Breeders Crown never returned to its only Western Canadian site, but in 2000, Northlands sent a souvenir to The Meadowlands for the Breeders Crown mare pace. The 1999 Northlands Filly Pace champ Rons Girl (p, 4, 1:49.3s; $576,458) began her career for Canadian Hall of Fame trainer/driver Keith Clark, concluding her 3-year-old season by winning four in a row at Edmonton by a combined margin of over 26 lengths. Paired with driver Mike Lachance for the 2000 Breeders Crown, Rons Girl took charge with a three-wide blast to the opening quarter in :26.1, maintaining her advantage to the gripping 1:50.4 photo finish over Galleria.

Northlands Park is the third of the original Breeders Crown sites to close, after Maywood Park (2015) and Liberty Bell Park (1986). “The racing industry failed Northlands,” said a resigned Butler. He described himself as a lifelong fan and bettor, although now semi-retired and no longer working in the industry.

As the track’s own funeral nears after 57 years of harness racing, Butler was reminded of the roughly 40 racing fans who loved Northlands Park enough to make it their final resting place. Technically it was illegal to spread cremated human remains on the infield, but “people would approach us” about making an exception, he said, so exceptions were made — discreetly, in the stakes winners circle, before the races. “We used to tell (relatives), ‘If you meet this guard, he’ll take you over through the tunnel, and we’ll buy you and your family dinner afterward.’”

On Aug. 25, 14,568 spectators attended the last live thoroughbred card at Northlands Park. It will remain operational as a harness track until Saturday, conducting races that were destined for Century Mile, the new Edmonton-area “A” track under construction. (Century Mile’s opening is now pushed ahead to spring 2019.)

Driver Bill O’Donnell looked back on the 1984 Breeders Crown at Northlands with respect for the vanquished hometown favorite and venue: “Troublemaker’s Breeders Crown win was a special time for me. It was a welcome surprise as (eventual Horse of the Year) On The Road Again was dominant that year, although he wasn’t staked to some of the bigger races.” He called the end of Northlands unfortunate, but not necessarily reflective of what lies ahead: “I’ve only been to Northlands Park a few times and it will be missed by the industry, especially in Alberta. Times change and with the second new track being built in Alberta, hopefully racing will continue to thrive along with Century Downs (in Calgary).”

On Oct. 27, the temporary reprieve provided by the added standardbred dates runs out, precisely as Breeders Crown finals get underway at Pocono. Northlands Park will go dark, extinguishing a flicker of the championships’ history at one of Canada’s oldest tracks.

“Walking up to a facility like that, I always thought, ‘What a grand old lady’,” said Butler, musing on the imminent closure. “I used to see all of her scars and scrapes and imperfections, but the last time I saw her, she looked pretty damn good.”