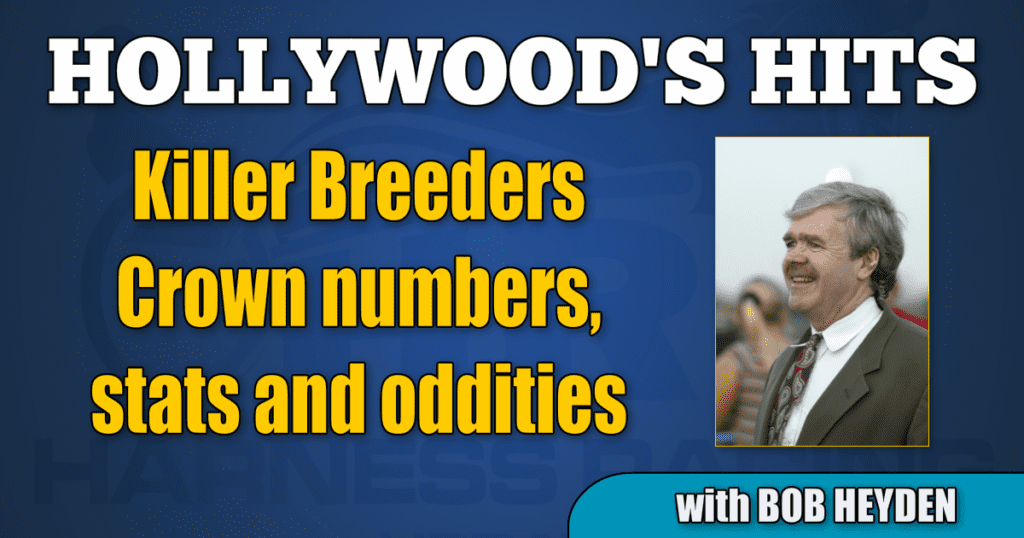 Tonight at Pocono: 45 pacers 51 trotters, 13 that have won over 50 per cent of their career starts, 20 that are trained by a Swedish born trainer, 12 by a female conditioner and there are three 2018 maidens on the card — Nutcracker Sweet, Caprice Hill and Frost Damage Blues

If Tactical Landing wins the Breeders Crown, he will be the most expensive yearling ever sold at auction to become a Crown winner. The $800,000 yearling is already the highest-priced winner of a Hambletonian elimination.

Ake Svanstedt holds both world records for sophomores as we head into the Breeders Crown — 1:49.4 for Plunge Blue Chip and 1:49.1 for Six Pack; both by Muscle Mass. Svanstedt is looking for that first Crown trophy.

The two best Down Under breds from New Zealand racing in the same year? It sure looks that way with Shartin N and Lazarus N. Can one of that pair break through to bring the Breeders Crown back home?

October 29, two days after the Breeders Crown finals, it’ll be seven years since Sweet Lou’s 1:49 world record for freshman was established. Amazing how long that has stood. It took a daughter of his to be the first to eclipse it. (1:48.3).

McWicked is looking to do what only one horse (a trotter) has done prior — win the Breeders Crown four years apart! Wesgate Crown did it in 1993 and 1997 at ages 2 and 6. McWicked, the sophomore winner from 2014, will try and duplicate at ages 3 and 7. McWicked is also the first horse to have million-dollar seasons four years apart with none in between.

Speaking of McWicked, back in 2014 he was the division winner 128 votes to 15 over Always B Miki. Who would have guessed that they would later record the two fastest race miles of all time 1:46 for Always B Miki and 1:46.2 for McWicked, both at Red Mile?

Yannick Gingras began his Breeders Crown career with just one win in his first 34 attempts. David Miller had just six Crown wins in his first 66 attempts.

Who says there’s no value At Sears?

In 2004, Rocknroll Hanover, driven by Brian Sears won the Metro with the first sub-1:50 win for a freshman, lighting up the board at 31-1 in the process. Fourteen years later, Sears lit up the board again with $62.20 winner Cruzado Dela Noche in the Yonkers International Trot.

In 2013, there was a certain theme to be followed while wagering — all 12 of the Breeders Crown finals — the entire card — went to a driver who finished that year in the top five in money earnings.

Hail to the Duke

Remember when Duke Of York won the 2001 Breeders Crown at $71.30 as the prohibitive favorite Andover Hall suffered his first career defeat?

Hall of a year

Cantab Hall dominated at 2, culminating in a Breeders Crown in 2003. Now his sons dominate the same 2-year-old Breeders Crown division with regularity, and he’ll look to keep it going in 2018, as his standout son Father Patrick will be among those sires he’ll be contending with.

Will it be Tetrick’s $200 million crowning?

Tim Tetrick is 36 and is on the verge of $200 million, a number he’ll very likely reach in this year’s Crown. John Campbell became the first ever driver to reach $100 million in the 1991 Breeders Crown with Armbro Keepsake. He was 36 also. Oh, and speaking of their mid-30s, Ron Pierce (1991) and Brian Sears (2003) both won their initial Breeders Crowns at age 35.

Homicide Hunter, the new world record setting trotter, was one of four supplemental entrants in 2017 to the Crown — along with Funknwaffles, Sintra and International Moni.

Half of the 12 Breeders Crown winners in 2016 were homebreds.

What a difference a year makes

In 2012, I Luv The Nitelife, Captaintreacherous and Bee A Magician all tasted defeat as freshmen in the Breeders Crown at Woodbine.

In 2013, not only did all three win their Breeders Crown divisions as sophomores, they emerged from that night with a composite mark of 40-for-42 on the year, just two losses between the three of them — or one less than they had from that one fateful freshman Crown night just a year earlier.

This year marks the 10th anniversary of the only time Somebeachsomewhere and Muscle Hill competed on the same program. It came during Breeders Crown Night at the Meadowlands in November of 2008. They both won and they both would go on to 20-for-21 careers with a HOY title, a world race record and a Hall Of Fame statue.

Odd stat of 2017 worth revisiting. The top 5 finishers from the 2017 Hambletonian were not in the Breeders Crown. The bottom five were.

Finally, over half (51.3 per cent) of the 2015 Breeders Crown finalists were over 30-1. What will 2018 serve up for the bettors, especially with the 15 per cent takeout on all wagers, which is a very good idea and the powers that be should be commended for their intuition on this one.