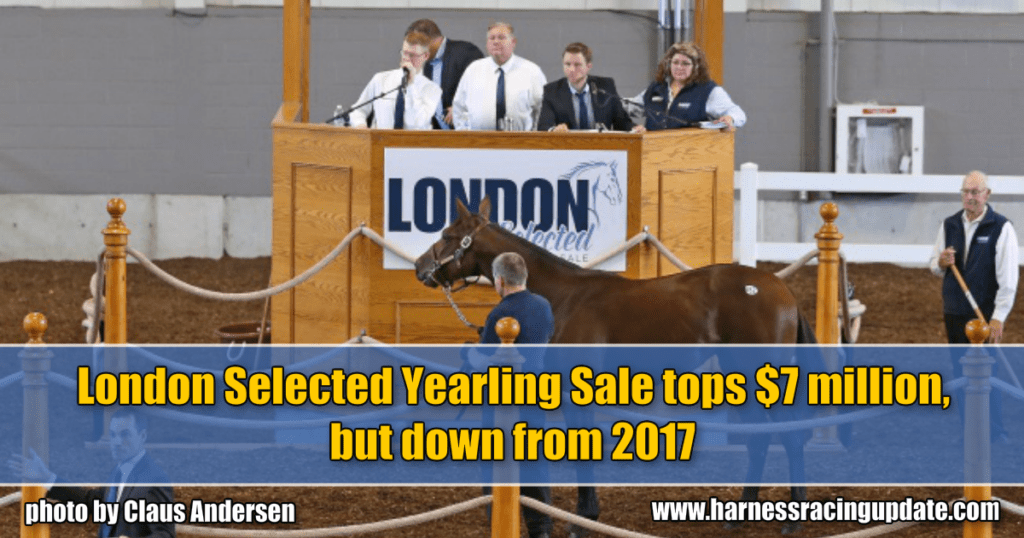 At the second annual London Selected Yearling Sale, which concluded Sunday, the average was down 8.1 per cent and the gross was off 6.3 per cent. Karma Seelster topped the second session with a bid of $127,000 by Gregg McNair.

Last year, the second day of the inaugural London Selected Yearling Sale was the stronger of the two sessions. This year, it was the reverse. Sunday’s session at the Metroland Media Agri-Plex facility at the Western Fair District in London, ON was the softer of the two days.

“I don’t think you can be disappointed with a gross of $7 million,” said sale manager Ann Straatman.

The average was off 8.1 per cent from the 2017 average of $24,627, but Straatman pointed out some 30 yearlings sold at the end of the second session were initially scheduled to sell in the London Mixed Sale originally scheduled for Oct. 15, but were added to the yearling sale when the mixed sale was cancelled due to lack of entries.

The difference between this year and last? Straatman said last year horses were sold alphabetically by the dam’s name and it just worked out that the first day was stronger than the second. This year, Straatman said she, “graded all of the horses by pedigree and conformation, as all sales managers do, and divided the top 200 scored horses between Day One and Day Two, so there was lots of pedigree on both days.”

She further explained that since Saturday’s opening session was kept to 100 horses so people could travel some two hours to Woodbine Mohawk Park for Saturday night’s Ontario Sires Stakes (OSS) Super Final card, the fact that Sunday featured more than double the number of horses sold as compared to Saturday naturally meant Sunday’s numbers were likely to be down.

“As a sale manager, you want to try to create momentum in the sale and have some top pedigrees towards the start of the sale and once those are sold then people move on, if they didn’t buy them, to their second choice and then those horses have an opportunity to sell for big numbers as well. That was the intention. I know that the sale managers at Lexington and Harrisburg do exactly that, in trying to create momentum in the sale. Even though it’s just a two-day (sale here), that was my intention as well,” Straatman said.

The top-selling yearling from the opening session held up as the overall sale topper. Bill Donovan of Florida paid $187,000 for Stonebridge Excel, a daughter of Muscle Mass out of Armbro Vanquish bred and consigned by Stonebridge Farm of Arva, ON.

“She was a very nice individual, it’s a nice family, being a half sister to Kendall Seelster who is a sub-1:50, multiple-stakes winner. The 2-year-old, Kylie Seelster, has stepped up and was second in the Champlain and has some stake wins as well. It’s a nice, current family, sired by Sportswriter, and, as an individual, she was nice,” said Seelster’s assistant farm manager Walter Parkinson. “Gregg actually trains Kylie Seelster, the half-sister 2-year-old.”

Sunday’s next highest priced yearling was Perseus Seelster, a Big Jim colt out of Pantecostal that sold to Gestion Mastel Inc. of Cambridge, ON for $80,000 out of the Seelster consignment.