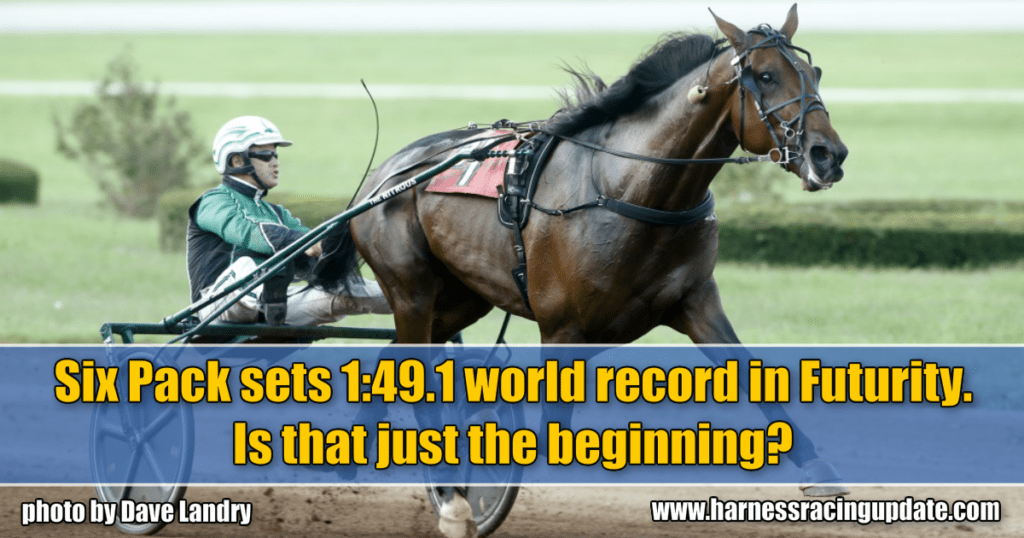 Is 1:49.1 world record in Futurity just the beginning for Six Pack?

The colt’s trainer, driver and part-owner Ake Svanstedt said the 3-year-old is capable of even faster.

The Red Mile teletimer was still a white hot 1:49.1 representing the fastest trotting mile in harness racing by a 3-year-old when Six Pack’s trainer, driver and part-owner Ake Svanstedt indicated it may be just the beginning.

“He’s lazy, he can go even faster. But he did a very good race,” Svanstedt said of Six Pack’s one-and-three-quarter-length victory Sunday afternoon in the 126th Kentucky Futurity final, sponsored by Hunterton Farms, Stoner Manor Inc. and Menhammer Stuteri Ab.

Svanstedt said he knew the son of Muscle Mass—Pleasing Lady was capable of smashing his own 3-year-old world record in the final Futurity heat (purse $434,000) for two reasons — 1. He won his first ($93,000) by a neck in 1:50.2 over supplemental entry Fiftydallarbill and 2. He was racing over the lightning-fast red clay in which world records have tumbled this week like autumn leaves.

“I think so, because I pulled the shoes and I had done it one time before at the Meadowlands and he raced :50 flat very easily,” Svanstedt said, adding that he pulled the shoes only for the second heat. “The track takes a lot off the foot and he couldn’t race two times without shoes.”

Svanstedt got off the gate third behind Crystal Fashion leading the field and Met’s Hall occupying the pocket. Svanstedt tipped the Muscle Mass colt off the rail past a :27.1 opening quarter, cleared control, and kept the pace hot through a :54.4 half.

Six Pack’s margin grew moving around the final turn as he passed three-quarters in 1:21.2 ahead of Crystal Fashion and Met’s Hall chasing behind. Svanstedt urged his colt through the stretch and darted to the finish while Crystal Fashion narrowed on the leader a touch towards the outside in second. Met’s Hall settled for third ahead of You Know You Do fourth.

Svanstedt said he knew he was the winner when he took the lead and Six Pack “felt very good. In the last turn, I had a lot of horse in my hand.”

“It feels pretty good,” Gural said of the world record, his second of the day to go with the 1:50.1 his 4-year-old trotting mare Ice Attraction, also a Svanstedt pupil, earned in the $72,000 Libfeld & Katz Breeding Partnership Allerage Farms Mare Trot.

Since moving to the United States from Sweden, Svandstedt has become the king of the trotting world records.

Then, earlier this year, Svanstedt filly Plunge Blue Chip became the first 3-year-old trotter to break the 1:50 barrier with a 1:49.4 mile at the Meadowlands that was equaled Saturday (Oct. 6) by Impinktoo at Red Mile. Six Pack also set a 1:50 world record for 3-year-old trotting colts at the Meadowlands before bettering that in the Kentucky Futurity final. Then there was Ice Attraction’s world mark.

“Yes, we have a lot of records. I have good horses and owners that spent money on horses,” Svanstedt said.

Gural said Six Pack’s Futurity victory, the first for either himself or Svanstedt “is a big win because very few horses — really only Atlanta and him — went to the front and stayed there. You saw horses that really got leg-weary, you know. I said to my wife, ‘too many of these horses are coming out of the sky to win,’ but I don’t know how he can avoid it being up close from the rail. It was going to have to be what he did and he did it. We had the best horse and I think (Svanstedt) knew we had the best horse.”

Gural, who sponsored numerous Red Mile races through his Allerage Farms, said he was thrilled to win the track’s signature event.

“I love this, just like everybody else,” he said. “It’s my favorite week of the year.”

But did winning the Futurity make up for the fact that Svandstedt drove erratically and Six Pack caused interference in the stretch of his Hambletonian heat (in which he was favored) and was set back to sixth and failed to advance?

“Ah, no, no. That’s the Hambletonian,” Svanstedt said emphatically. “I don’t want to talk about the Hambletonian. The horse was not so good that day, that’s why I make the wrong decision. If the horse had been perfect, then I would have driven him differently.”

Tactical Landing and Jimmy Takter won the other Futurity heat in 1:50.2 in what could be the final driving victory at Red Mile for the retiring Takter.

— with files from Ray Cotolo, for Red Mile