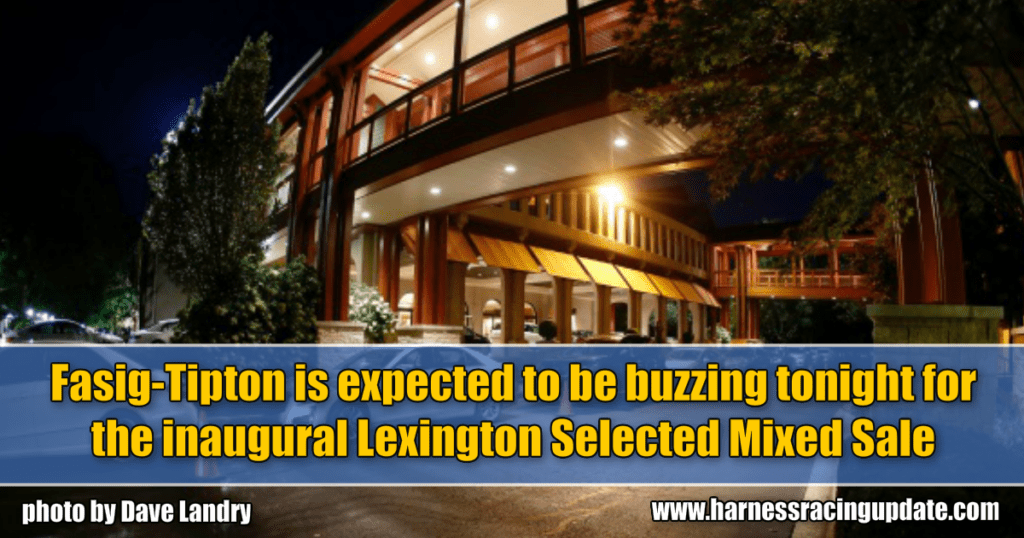 “Between the mares – who they are in foal – the stallion shares and the racehorses, we’re really looking forward to tonight,” said Reid, the co-manager of the sale.

There are 115 cataloged for the sale to be held at the Fasig Tipton sales pavilion starting at 7 p.m.

“We’re just ready to get rolling tomorrow after the Futurity,” Reid said. “I think it’s going to be well-attended. Hanover is coming down. David Meirs is down here. I got calls from Europeans.”

Stallion shares include two shares of Muscle Hill, one share of Captaintreacherous, and one share of Father Patrick.

The sale is offering several top racing prospects in all age groups including one of the newest world champions, hip #84 IMPINKTOO, a half sister to Hambletonian winner PINKMAN, as well as several other top filly prospects including Megadolce and What A Knockout.

“I’m kind of excited about the mixed sale,” said co-manager Randy Manges. “We have (Impinktoo) the Manofmanymissions filly that equalled the world record today, she’s in there. She’s won four in a row. She was the Ohio three-year-old champion of the year. She won at Delaware in an Ohio Breeders Championship race.

“I think it will be, hopefully, the start of a new venture. There are not a lot mixed sales like there used to be.”

Top 2-year-olds including hip# 72 TRIX AND STONES, a recent runner up in the International Stallion that has several stakes events remaining this fall and recent Red Mile winner Lucky Weekend.

Seven horses are in to race today at Red Mile including KY Futurity starter Missle Hill.

“We are all excited for the Mixed Sale as we feel we are offering a deep catalog with top sire power across the board,” said Reid. “Several of the broodmares are in foal to first crop sires and over 30 horses have raced within the last 10 days including several winners and a new world record holder.”

Several of the 2- and 3-year-olds still have important stakes engagements left this fall and offers a unique opportunity to purchase a top prospect and drop in the box in such stakes events as the Breeders Crown, Matrons, Circle City, Ontario Sire Super Finals.

Horses are available for inspecting on the sales grounds and are looking forward to the offering.