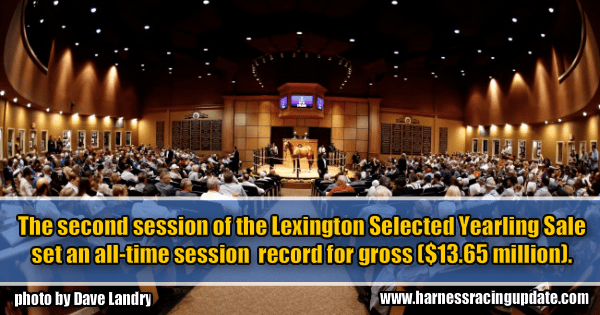 Beyond selling two yearlings for $400,000, the second session of the Lexington Selected Yearling Sale set an all-time session record for gross ($13.65 million). Through two days, the average of $100,192 is up more than 10 per cent and the sale has already smashed the record for most $100,000 yearlings sold.

Just like last year, the second session of the Lexington Selected Yearling Sale — held Wednesday evening at the Fasig-Tipton sales pavilion — was full of surprises.

“We sold a few more horses than we did last year, but the average is up over 10 per cent year over year, which is always good when you increase horses, number of head sold,” said co-manager David Reid.

“You never really know what to predict and I think that gets back to the depth of the catalogue. You get through the first night and people can regroup, come back in and reassess where they are – what they have and what they didn’t get, maybe they readjusted their budgets or maybe you had someone else come in from out of town… there’s a hundred factors that go into it. You always learn something new every sale and today is no different.

Last year, the overall sale topper came out of the second session rather than the premier opening night. The $480,000 Muscle Hill filly out of Sina named Beautiful Sin bred by Meadowlands owner Jeff Gural, his wife Paula Gural and Monica Reschke, the wife of trainer Bob Bencal was sold out of Bob Boni’s Northwood Bloodstock consignment to Swedish agent Robert Lindstrom.

This year, the sale did one better. Not one, but two, yearlings sold for $400,000 or more from the second session — both bred, in part, by David McDuffee of Delray Beach, FL and both sold by Peninsula Farms of Lexington.

Both yearlings surpassed the opening-night topper — the Somebeachsomewhere colt out of Worldly Treasure — a full-brother to Captaintreacherous — that sold to John Cancelliere of New Jersey for $360,000.

The fireworks started with just the fourth yearling in the ring Wednesday when the Muscle Hill filly out of Bella Dolce named Bellareina Dolce danced her way to a $400,000 payday.

Lina Alm purchased the filly on behalf of SRF Stable of Sweden, the owners of Beautiful Sin.

Alm said she has a unique way of inspecting horses.

“When I look at a horse I never look at the pedigree first,” Alm said. “I try not to look at the pedigree because I don’t want to have anything in the back of my head that’s turning me this way or that way. So, I approach the horse and I just look at it as an individual.

“I feel very right when I get the right feeling (about a horse). It feels so obvious that this horse has a good spirit. (The ones I like) have something and I can never explain what it is.”

That Bellareina Dolce’s pedigree page matched the strong, positive feeling Alm had about the horse made for a perfect union.

“That is the jackpot,” Alm said. “When I find the individual and then I look and then I see (the family is strong)…. Yes!”

The second yearling to surpass $400,000 stands as the sale topper through the first two sessions.

Chestnut Hill, a Muscle Hill colt out of Poof She’s Gone sold for $410,000 to trainer Nifty Norman as agent on behalf of the colt’s breeders Mel Hartman of Ottawa, ON and McDuffee, who raced and own Poof She’s Gone, a winner of $1.3 million.

“We bred the colt, we brought him down here to sell and I said to Nifty tonight, ‘Nifty, if you want to buy the colt, we’ll buy it and stay in for part of it, so we’ll see how it works out,” McDuffee said. “There may be some other partners, we don’t know that yet.”

McDuffee, who typically keeps his top homebreds to race, said he decided to sell Bellareina Dolce and Chestnut Hill because he has, “a bunch of broodmares, all pretty much interrelated. In the Pizza Dolce family, I’ve got daughters and more daughters and granddaughters, yearlings and weanlings on the ground… I’ve got Muscle Hills in the bellies and I can only have so many of these.

“I made a decision to sell a couple high-end yearlings this year. I’m selling the sister Sunday (in the mixed sale) of Bella Dolce, Mega Dolce, for the same reason. She’s probably, for a broodmare, the top line you can find in this business, but you can’t have too many of all the same thing.”

McDuffee said Poof She’s Gone is, “a great looking horse. This colt looks the part because of her. She’s a magnificent-looking mare. This is the first really nice colt that she’s sold.

As for selling two $400,000 yearlings in one night, McDuffee said he was extremely happy.

“I’ve done very well tonight,” he said. “And we just bought a beautiful Kadabra colt.” That colt, out of Magic Marker, is named Magic Bob and cost $170,000 to buy.

Owner Ken Jacobs of Baldwinsville, NY was particularly active on Wednesday, spending $935,000 on four horses to put his two-day expenditure at the Lexington Selected Yearling Sale at $1,075,000. He sits second, just behind Burke Racing Stable LLC, on the top buyers’ list through two days. Burke has spent $1,085,000, total, on nine horses. Dana Parham has spent $840,000 on six yearlings through two days.

Four of Jacobs’ purchases are trotters. Asked if he was still on a mission to win the Hambletonian that he felt he was so close to winning with Walner in 2017 before the horse was scratched, Jacobs laughed.

“Yeah, definitely. When you come that close and you know you would’ve won it… I’d love to win it,” he said. “It is one goal that I’d like to achieve. That’s why I buy (trotters) and I like the Chapter Sevens.”

“I liked all the Chapter Sevens, he’s the best in New York,” Jacobs said. “I usually buy the same quantity that I sell and I’m going to sell nine this year, so I’ll buy nine to replace them. That’s what I do. I don’t buy a lot of horses, but whatever I’m selling I usually replace.”

“He’s been very productive, 95 per cent getting the mares in foal and that’s pretty high. I don’t think any other stud has got that many impregnated, so we’re pretty happy with his swimmers, so to speak,” Jacobs said. “I think he’s going to be an outstanding stud for the future. We need to replace Muscle Hill or Chapter Seven (at some point), so he might be a good replacement.”

Reid said, “the trotters stole the show tonight, the Muscle Hills and the Chapter Sevens were very, very strong.”

Reid said, “there was a lot of energy in the building” for the second session. “I thought it was a positive sale on multiple levels and we look forward for it to continue, that’s for sure.”

The third session of the Lexington Selected Yearling Sale will feature 165 yearlings. It begins tonight at 7 p.m. at Fasig-Tipton. For more information about the sale, please visit: http://www.lexingtonselected.com.