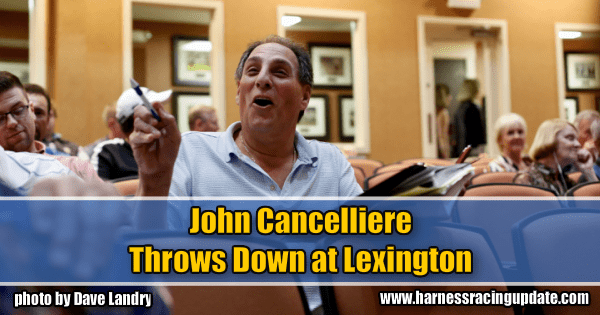 New Jersey brothers claim the full-brother to Captaintreacherous with a bid of $360,000 and top a gangbusters opening session of the Lexington Selected Yearling Sale that set a record for gross. million.

A few minutes after unleashing rapid-fire counter-punches in a toe-to-toe bidding slugfest across the Fasig-Tipton sales arena over the rights to take home the full-brother to Captaintreacherous, John Cancelliere was standing in the front lobby enjoying every second of scoring the TKO.

“He was aggravating me a little bit, because he should’ve taken his rightful position in the back seat, but that’s okay. I understand that he had to give it a shot or two,” John said of the underbidder on the $360,000 opening-session sale topper at the Lexington Selected Yearling Sale.

It was one of the more entertaining bidding contests in recent memory at the sale.

Asked if he was enjoying himself, John grinned.

“We like to mix it up a little bit. This is the enjoyable part,” John said of buying top-of-the-line yearlings that will be trained by his brother, Tom.

“It’s always fun and it’s always exciting, until you get them home and start working with them and you find out their quirks, but since I don’t work with them, my brother Tommy does, it’s okay. I can bitch and moan at him,” John said, laughing. “On Saturday morning I show up at the farm and I screw around and watch him and occasionally he’ll let me go jog a horse.”

The bidding war over Hip 82, a Somebeachsomewhere colt out of Worldly Treasure named Treasure Trove that was bred by White Birch Farm and consigned by Preferred Equine, was the highlight of a sale filled with fireworks. The average of $126,471 is up 10.6 per cent from the 2017 opening-session average of $114,344. The gross of $12,900,000 is the highest, ever, for an opening session at the Lexington Selected Yearling Sale.

“Last year, it was 10-something,” said the sale’s co-manager Randy Manges, referring to a 2017 opening-session gross of over $10.6 million.

“This year, we sold more horses so that had something to do with the gross, but the average – we just had good horses, it’s that simple.”

As for the Cancelliere brothers, they also spent $150,000 on a Sweet Lou colt out of Shark Lightning named Like Lightning Lou, consigned by Spring Haven Farm. The brothers’ total expenditure on the night was just over a half-million dollars.

“I’m not going to buy anything else tonight. I’ve had my fun and going to have a couple of drinks now,” John said. “Just please tell me (Treasure Trove) wasn’t the highest-priced horse at this sale so far.”

When informed that he had, indeed, collared the sale-topper, John slipped into mock protest.

“No, no, no… somebody has got to come in higher than me tonight. I don’t want it,” he said, explaining he has been down this road before with little luck.

“Look, this started with a joke. I said to Tommy one day, ‘Go buy a horse’ and it started as a joke and just escalated from there,” John said. “We own a horse farm, we ended up breeding. We bred a lot of horses to Sweet Lou… We love Sweet Lou, he’s my favorite. I love Lou. When we got the Love Me Some Lou brother, I was yelling across the room, ‘Loooooou.’”

David Reid, who manages the sale with Manges, laughed about the Cancelliere brothers’ display.

“Any time the brothers pull into town, it’s always a show and they didn’t disappoint, that’s for sure,” Reid said. “It was definitely entertaining and hats off to them and the underbidder. There was a lot of action on that colt, which there should be. To see them come out in the end, they have a great staying power.”

“We can only hope that he’s half the horse that (Captaintreacherous) is and I would be doing a handstand,” John said.

Though the $360,000 price could be surpassed in the four remaining sale sessions, as it stands now, Treasure Trove is the first sale topper White Birch has ever produced.

“I can’t take any credit for that – (White Birch does) a great job. Great pedigrees, great individuals… Not only did they sell him, but they sold a brother to Stay Hungry tonight for $300,000. Overall, it’s a credit to them.”

Asked if he was surprised the sale average was up more than 10 per cent compared to last year’s record-breaking opening session, Manges said, “Yeah, of course. I’m always surprised when we’re up off of the best sale we’ve ever had.”

As for the opening night crowd, Reid said he thought it was “on par” with recent years.

“You walk around and you talk to the buyers and I think they felt the market was very strong and the numbers will probably indicate that. On the other hand, it’s really great to see everybody in town. The crowd was great and it’s just opening night – we’ve got 600 (yearlings) to go, but it’s gratifying to Randy and myself that put together the sale. It’s gratifying to see the consignors bring quality horses here. For the most part, there’s a few hiccups every night and we had a few tonight, but overall I thought the sale had good energy, good flow and I think the numbers will speak for themselves.”

“There were a lot of people here, people I hadn’t seen in years… we weren’t really seeing that in the people who purchased, but the people were bidding,” Manges added. “We had good activity from the Europeans tonight. They bought a lot of horses and spent a lot of money.”

Despite all the good news, Manges said people should temper their expectations for a record-setting second session.

“Tomorrow night it’ll be a little tough,” he said. “We sold our highest-priced horse last year on the second night and we had the highest gross ever of any session – it was $12 million last year for the second session, so we’ll see.”

Reid’s Preferred Equine was the leading consignor by gross, selling 21 yearlings for a total gross of $2,964,000, an average of $141,143. Reid said it was a record night for his operation.

“Coming in, the feedback and just seeing what we had, I thought we were loaded for bear,” Reid said.

Avritt joked someone may need to clean up the seat he was sitting in while watching the bids continue to climb.

“It got harder to breathe, I’ll say that. I had my iPad with me and I was videoing the whole thing, for posterity. I could see the board, too, and I was listening,” he said. “I’ve tried to keep the level of excitement down pretty low, you know. I try not to get too high on them. Everybody was saying, ‘Ah, he’ll bring between $200,000 and $300,000’ and I’m thinking $150,000 would tickle me a bit. I was trying to keep the expectations down. I knew it was a nice colt and I knew everything was falling into place, but who knows after that?”

Stewart said, “when you look at that family and what’s happened just in the last month-and-a-half (with Tall Dark Stranger’s talented 2-year-old half-sister Beautyonthebeach), that’s how you get those prices because it’s a tremendous family, but it’s striking when the iron is hot.”

Johansson said she picked out of Tall Dark Stranger with her father, Hall of Fame trainer Jimmy Takter.

“I’ve been looking at yearlings with my dad as he’s heading into retirement here and stepping into his new role and we both just loved the colt – super athletic, gorgeous. You can’t fault him anywhere and he’s got the page to go with the individual, so there isn’t really much negative to say about the colt,” she said.

Johansson said, so far, the partners on the colt are Marvin Katz, Caviart Farm, Crawford Farm and Howard Taylor.

The trainer said the high price tag doesn’t create extra pressure; quite the contrary, in fact.

“This colt has a license to play in Division One and that’s where we want to be,” Johansson said. “I feel better about having horses like that. They are usually easier to train, they are naturally athletic and they’ve got pedigrees that carry them a far way.”

As for the three horses that sold for $300,000, Determination Stable of Montreal bought the sale’s highest-priced trotter — the Cantab Hall filly out of Bright Baby Blues named Whose Blues consigned by Cane Run Farm.

“Ross Croghan liked the horse a lot, so that’s where we’re at,” Parham said. “Ross couldn’t find a flaw with him and he has a good eye for horses. He’s done well over the years.”

Parham said he decided to be particularly active at this year’s sale.

“I missed a couple last year that went for $300,000, $350,000… I can’t buy them all, but there’s not one I can’t buy and I was just determined this year that I’m not going to get outbid on one or two of my favorites,” Parham said. “I passed up on Rocknroll Hanover years ago and I regretted that. I could’ve had him.

Deo Volente CEO Mike Gulotta said, “it’s ridiculously exciting” to sell a horse for $300,000. “We always thought that he was going to sell well, but ridiculously well? No.

“But, the mare has produced. She had Im The Pied Piper. She had I Luv The Nitelife, you know. She’s a sister to Lis Mara. We owned Lis Mara. So there’s a special place in our heart for this one,” Gulotta said. “We were rooting for (Das Deo’s full-brother) De Los Cielos Deo all year. Ronnie (Burke) said that the horse was his best since Sweet Lou. I understand that they still have very high hopes for him.”

Trainer Tony Alagna signed for the $300,000 half-brother to Stay Hungry on behalf of Marvin Katz, Brad Grant and Al Libfeld. Force N Fury is a Captaintreacherous colt out of My Little Dragon raised by White Birch Farm and consigned by Preferred.

“We bought that colt, basically, because we have Stay Hungry, of course, and (Force N Fury is a) Captaintreacherous as opposed to Somebeachsomewhere and we think The Captain is the next generation of Somebeach, being his best son,” Alagna said.

The second session of the Lexington Selected Yearling Sale will feature 167 yearlings. It begins tonight at 7 p.m. at Fasig-Tipton. For more information about the sale, please visit: http://www.lexingtonselected.com.