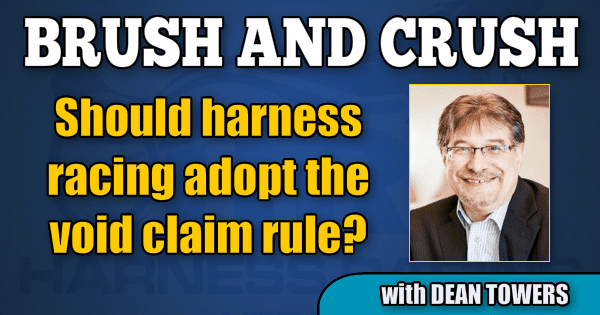 We’ve all seen it when we’re flipping through the program – a horse with poor form or gaps in races drops down to a bottom claimer. A few minutes later, we often learn the horse was completely terrible. The owner who took a shot filling out the claim slip is left holding the bag.

It’s been a part of the game for a long time; “buyer beware”, the ultimate horse trading mantra. But as the world changes, it appears that line is slowly being eliminated from the lexicon.

Back in 2006 at an equine conference, an idea was floated about voiding claims. The process was a simple one. If a horse comes off the track dead lame, or in the worst cases breaks down, the claimant can ship the horse back to the original barn, no questions asked.

The veterinarians on the panel believed that this policy change would help improve horse safety and give a much-needed boost to the integrity of the game. After all, trainers would have no incentive to patch a lame horse to “get rid of him” if a claim could be voided. The legislators were convinced this would give these trainers only one choice – give the horse the time he needs to sound up, or sell him above board in a sale (with full disclosure).

The biggest thoroughbred jurisdiction to adopt the rule was California, and it did indeed change the culture of the claiming game. Before the rule was enacted, 15 per cent of all claimed horses in the state never raced again. Present day, that number dropped to 3.5 per cent. Despite the initial complaints, this rule is now widely accepted in the Golden State and other states – Kentucky, Delaware, New York for example – have followed.

The new rules only affect the thoroughbred game, and we all know full well (thank goodness) harness horses are heartier and break down in miniscule amounts compared to them. But is it worth pursuing in harness racing? I can think of a few reasons why it is.

Public and government relations and marketing

In 2018, animal welfare is looked at much differently than 20 years ago. Circuses have been banned from cities, as have rodeos; dog racing is being phased out; whip bans are prevalent. It’s
a totally different time.

As California Horse Racing Board vet Dr. Tim Grande has said, “Entering a race to lose a horse rather than to win a race is unacceptable in this day and age.”

With so much money for purses coming from government decree – slots, sports betting, friendly legislation – it behooves horse racing to get ahead of the curve on any and all animal welfare issues. A void claim rule is an arrow in the quiver.

I don’t know how many times I’ve spoken with successful friends and associates about owning horses where they look at me like I have six heads. They simply don’t believe the game is on the up and up.

When I explain how the claiming game works, they are impressively dumbfounded.

“Let me get this straight. I can’t check the horse out, I can’t get a vet to look at him, and during the race he can take a bad step and break down where he’s worthless. And I still have to give you a check for $40,000?”

They don’t buy a house, boat, car or business without inspections, mechanical fitness or safeguards, and they believe if they’re giving up big money for a horse, they should have similar protections. A void claim rule is something that tells them their money is treated better than the monopoly version.

The love of the horse

I read a recent HRU issue where various grooms were interviewed. I was amazed (I should not have been) when I read their answers to Sandra Snyder’s “what do you love most about your job” question. Each and every one of them answered the best part was working with horses, because they love the animal. I’m convinced that anything this sport does that protects the animal will have a wide audience.

Thoroughbred racing has enjoyed some success with their void claim rule and more and more states are jumping aboard. Perhaps it’s time harness racing joined them. There will be blowback (as there is with any rule change in this status-quo sport), but I think it’s an idea that’s definitely worth pondering.