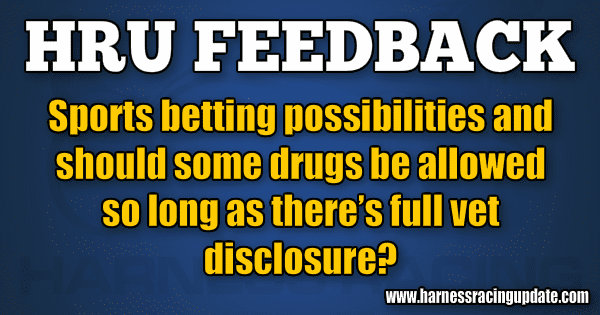 Now that sports betting has come to the Garden State, The Meadowlands could greatly benefit. When the Big M opens in October, they could put their collective minds together to come up with an exotic bet that would have large payouts to attract new harness fans. As an example, a $1 pick a certain number of NFL games (7-10) with points combined with a certain number of Saturday night races (2 or 3), and with perhaps a guaranteed minimum payout. I predict that the carryovers would be huge! If successful, after the NFL season ends, same could be done with NBA and/or March Madness. Another idea would be to give betting vouchers to those that have a certain number of winners. Who knows how many new fans or owners might come from this.

Over the last few years, a lot has been said about how harness racing and horse racing can, as a whole, gain popularity and draw new fans. At the same time, there has been numerous black eyes against the sport which has been in print and spread over the Internet. So, in my opinion, this could mean that someone does care. Why not, then, for those that do care what goes on in the industry, try this as a starting point: the authorities have been waving the white flag claiming that they are underfunded and under staffed when trying to keep ahead of the drug use. Why not allow the drugs, but before entries can be accepted the entries must be accompanied from the practising vet for that trainer a detailed list of all the drugs administered to each horse being entered by the trainer. Any drug found in the horse not on the vet’s list, the purse is placed in a hold. This would eliminate the cost of pre-race testing and the program could show as they do for Lasix something like PED’s for the public. Putting the purse in a hold is just the reverse of what happens now where the purse is paid out then months down the road drugs are found and then the trainer appeals and in most cases the trainer gets off. The thresholds for the drugs would be predetermined with allowable plus or minus variances and anything different then automatic suspension of 90 days no appeal plus monetary fine. Attach a three-strike rule for those who try to stretch the envelope and, after three strikes, lifetime suspensions. We already have a list of acceptable and a list of banned drugs so the work is partly done. If a drug shows up in a horse’s system after the attending vet has downloaded his list of what the horse has been treated with then again it would help the authorities zero in on the trainers who the sport has to come down hard on. All vets must be on an approved list for entries to be accepted and all help employed by the trainer must be routinely drug tested as a requirement to be licensed to eliminate this cross contamination excuse that sharp lawyers are taking the authorities to court on and fattening their bank accounts. Is this just a pipe dream? Maybe, but something needs to happen and happen now.