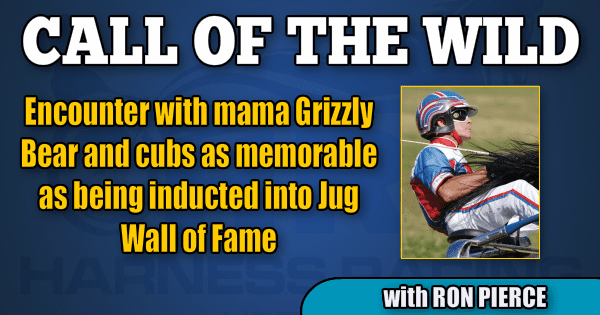 When Ron Pierce grew tired of prospecting for gold in Alaska this summer, he decided to liven things up the way only he can — with one heck of a fish tale involving a mama Grizzly Bear and her three cubs.

All things considered, the retired Hall of Fame driver is lucky to have lived to be able to travel to Delaware, OH this week to be inducted into the Little Brown Jug Wall of Fame.

Pierce said he was fishing in Alaska this summer when he hooked a King Salmon that was huge and hard to reel in.

“When I thought they were far enough away, I went back out and the fish was still on, so I continued fighting the fish and, don’t you know, here she comes again. She’s coming back and I didn’t see her until she was about 40 yards away. And my creel is over there by her, about 10 yards towards her from me, and I wasn’t going to go over there because that’s too close. I hung my pole in the tree again and climbed back up the hill. When she got to my creel, she tore it up. But, you know what? I’m glad she did that because I sewed it back together and now I can remember that. Every time I pick up my creel, I can see the stitching. She was trying to find something to eat. Then, she went on her way and, when I got back to my pole, the fish was gone.”

Pierce said prospecting didn’t yield as much gold this summer — “I came home with a couple of ounces of gold.” — so he decided to work his way south toward his home in Montana, fishing along the way.

“It was the best move I made,” Pierce said. “I was fishing for salmon and steelhead there and I had a ball.”

After his grizzly bear encounter — “You don’t mess with the grizzlies, babies or their food.” — Pierce worked his way into British Columbia to a place called Moricetown, near the town of Summit.

Occasionally, Pierce will run into some people in the wilderness and his career as a harness driver always is a good conversation starter.

“This one guy, he was mining up in (Alaska). I saw him out there working the mine and I stopped and was bullsh—— with him. His name was Danny Jacobson and, it’s such a small world, he loves the horses, he knew me, and his brother was a lawyer of mine… He was (John) Campbell’s lawyer, too, when we were getting sued over that race bike thing. His brother got us out of that.”

Pierce said the trip to Delaware, OH was fantastic, but came only after he purposely put on a few pounds so people wouldn’t think he was sick.

“I didn’t want anybody to say I was thin, so I over-ate and put on a few extra pounds on purpose to go down there,” he said. “As soon as I pulled into the fairgrounds, I could hear the races going on and Roger on the mic and I was like, ‘Wow.’ Usually I’m there with a horse. I felt like I really wanted to jump in again.”

Pierce was officially honored at a dinner on Tuesday night.

On Jug Day, Pierce was handed the reins to a retired Budweiser horse — “It was so cool… , I still had it.” — and was interviewed in the winner’s circle by Jason Settlemoir.

“The first group of horses I saw go by were the 3-year-old trotting fillies and there were some really pretty fillies. That made me want to drive,” Pierce said. “When the Jug was on the track, I really wanted to get out there.

“That was a great race. There was a little bit of drama and then what a trip (Courtly Choice) went. That was so impressive.”

Pierce said the best part was visiting with old friends.

“I ran into so many friends… I just ran into people everywhere I went. Good people. It was so good to see so many people that I haven’t seen in a long, long time… I don’t know if they are bullsh—— me or what, but everybody said they miss me so much.

Pierce is already home in Montana and preparing for another winter in the wilderness.

“I’m going to load up the trailer and come Monday morning, I want to be out of here,” he said. “I’m heading up into the Rocky Mountains and I’m going to try to get a young elk for meat for the winter. They have elk up there. I’m going to bow-hunt for elk.

“When it starts cooling off, I’ll head over the Rockies and drop down into northern California again for the winter. I can salmon fish all winter,” he said.

“It is a beautiful life.”