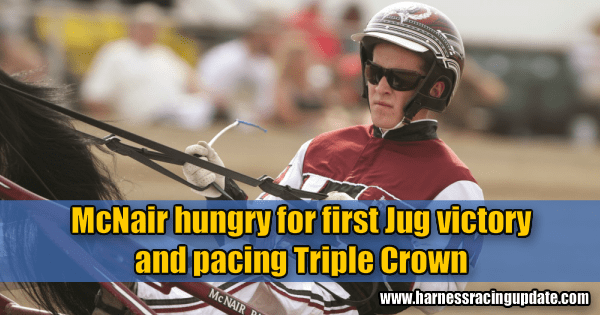 A win by Stay Hungry today in Delaware, OH would deliver a long-cherished Jug victory to McNair and his family and make the 28-year-old Canadian the youngest pacing Triple Crown-winning driver in history.

Doug McNair’s first vivid memory of the Little Brown Jug came in 2000 when he was 10. He watched from home in Guelph, ON as his father Gregg McNair’s trainee George Scooter posted a 56-1 upset out of the nine hole in the second heat of the Jug to force a race-off with Gallo Blue Chip and eventual winner Astreos.

“That would be my first big memory of (the Jug),” said Doug, who has been dreaming of winning the race ever since. It would be six more years before McNair first visited the famed Delaware Country Fairgrounds and 18 years after George Scooter’s Jug before he landed his first legitimate shot to win it.

This afternoon, Doug will send Stay Hungry out of the four hole in the second of two Jug heats. A victory would make Stay Hungry the first pacing Triple Crown winner in 15 years.

In 2006, at the age of 16, Doug made his first visit to Delaware, OH and helped warm up his father’s colt Eagle Luck the same year fellow Canadian Mark MacDonald drove Mr Feelgood to victory. Eagle Luck was fourth in his heat and failed to advance, but the experience left a deep impression on a teenage Doug McNair.

“It’s pretty cool when you see all the people there and hear Roger (Huston) come on the intercom early in the morning. It’s a lot different being there than just watching on TV,” Doug said.

A little more than two years after warming up Eagle Luck in Delaware, Doug officially started his driving career with a bang — winning his first lifetime start by driving Eagle Kay to victory in London, ON at the track then known as Western Fair Raceway.

Just two years later, at the age of 20, Doug had both his first Jug and Jugette drives. On the third Wednesday after Labor Day that year, he finished third with his father’s filly Dance Until Dawn in her heat and seventh in the 2010 Jugette final. The next day, in his Jug debut, Doug was fifth in his heat driving Gregg’s charge Aracache Hanover.

The next year, Doug drove Swinging Beauty in the Jugette for his father. She won her heat and was third in the final.

It would be three more years before Doug would return to Delaware, this time to drive Lady Shadow in the 2014 Jugette — she was the favorite, but finished fourth and failed to advance — and Three Of Clubs in the Jug for his father and the horse’s co-owner, harness racing legend Keith Waples who drove Strike Out to victory in the 1972 Jug for John Hayes, Sr.

Three Of Clubs was 27-1 in the 2014 Jug and finished fifth and failed to advance.

This year, at age 28, Doug has what he calls his first legitimate shot to win the Jug.

“I hope it’s not going to be my last shot at it, but I think it’s my first real shot. It’s the first time going in with definitely one of the favorites, so it’s a lot of fun,” he said.

A win would make Doug the youngest driver to win a pacing Triple Crown. George Sholty was 33 when he won the 1966 Crown with Romeo Hanover.

If Stay Hungry pulls off a victory this afternoon, it would be yet another major career milestone in recent years for Doug McNair a man that has won over 3,000 races and collected earnings exceeding $44 million in 11 years in the sulky.

In 2017, Doug was voted Canada’s Driver of the Year for the first time in his career the same year Stay Hungry delivered the driver’s first Breeders Crown with a victory at Hoosier Park.

The colt, trained by Tony Alagna and owned by Brad Grant of Ontario and the Irwin Samelman Estate, is primed for his Triple Crown bid thanks to two straight victories — a win in the $500,000 Messenger on Sept. 1 at Yonkers in the second leg of the Triple Crown and one on Sept. 8 at Woodbine Mohawk Park in a $63,340 Simcoe division.

“He’s really sharp right now,” Doug said of the son of Somebeachsomewhere—My Little Dragon. “Racing last week at Mohawk in the Simcoe, he was down the lane, first over, but he came home in :25.4 to win. He’s a real handy horse, he’s versatile and you can race him any way you want. He’s so fast off the gate, too. That’s what is going to help him (at Delaware).

It helps Stay Hungry that Doug McNair is his driver. Doug has driven the colt in all 20 of the pacer’s lifetime starts, a stretch that has produced a record of 11-1-4 and earnings approaching $1.2 million.

“You don’t get a shot to drive horses like this all the time, especially when there are so many different places to race in the States,” Doug said. “A lot of good horses come from down (the U.S.), a lot of top horses… I just got lucky, qualifying him (in Canada) last year and I got to stick with him.”

Doug said he owes a lot to Grant, one of Canada’s leading owners and a man who began using Doug to drive many of his horses a few years ago.

“I fell into it about two years ago, getting the drive on Easy Lover Hanover – just when he was starting to get good, and he ended up winning the Progress Pace (at Dover Downs). Brad starting using me on everything, horses for (Scott) McEneny and Ben Wallace. He started listing me on them all and I’ve been driving them for the last couple of years. It really helps me out, for sure.”

Grant, who also won this year’s Hambletonian as part of the ownership of filly Atlanta, is looking to win his first Little Brown Jug under his own name. In 2001 — a year after 10-year-old Doug McNair first fell in love with the Jug — Bettor’s Delight won the Little Brown Jug for Grant’s father, John, who was a founding partner in Flamboro Downs and a member of the Canadian Horse Racing Hall of Fame. In 2010, the year after John’s passing, Classic Rock Nroll won elimination and finished fifth in the final under the ownership of Grant’s mom Kay.

“It’s exciting,” said Grant. “It’s great to be in it. There is going to be some hard racing (today). There are a lot of good ones in there. I’m not convinced there is one horse that’s an outstanding favorite; there are a number of horses that could step up and win. I just hope that we’re there.”

Grant, who followed his father into the trucking and transportation business, has led the Woodbine Mohawk circuit in wins since 2016 and ranks near the top of the North American purse standings. In addition to co-owning Hambletonian-winner Atlanta, Grant’s horses include another Jug starter in Babes Dig Me, along with Dr J Hanover, Witch Dali, and unbeaten 2-year-old Captain Ahab.

“Honestly, winning the Hambo was on my bucket list, but it was on my bucket list for maybe five or six years from now,” Grant said. “(Trainer Rick Zeron) and his team did a great job to get (Atlanta) where she was and race her in the Hambletonian. That was exciting. That’s my surprise of the year. And I like surprises, believe me.

As for Doug McNair, he said winning a pacing Triple Crown would be, “pretty cool. I hadn’t really thought a whole lot about it until he won the Messenger and that kind of makes you think about it. It would be pretty special, not a lot of horses have done it. I think the last horse to win the Jug as the final (leg) was Ralph Hanover, so there are a lot of nice, good names on there.”

As for what it would mean just to win the Jug, Doug said “it’s definitely the race I’d love to win,” but a victory would mean as much, or more, to his father.