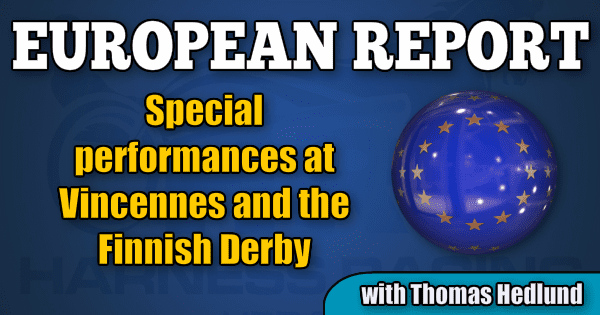 Special performances at Vincennes and the Finnish Derby

Paris track Vincennes offered a great schedule for the trotters on Saturday afternoon and the Criterium for 5-year-olds was the biggest stakes race on the day.

The race turned out to be a battle between two great horses and drivers. Jean-Michel Bazire and Franck Nivard are, without doubt, the two best drivers in Paris and Bazire looked quite comfortable in third over behind Davidson du Pont (Pacha du Pont) until midway in the 3,000-meters (approximately 1.9 miles) long race. With 1,400 meters to go, Davidson du Pont was the new leader of the race and 400 meters later, Nivard had moved Delia du Pommereux to position outside the leader.

The two front horses started a hard battle in the last turn and they left the other trotter far behind in the home stretch. Two horses that fought, two drivers that didn’t want to lose and the Criterium des 5 ans was a spectacular show for the spectators at Vincennes racetrack.

The 3-year-old trotters battled in two divisions during the day and $63,000 awaited the winner in the Prix Victor Regis for colts and geldings and in the Prix Uranie for the mares. Ready Cash son Fabulous Wood, driven by Matthieu Abrivard, bested his antagonists in a mile rate of 1:57 over 1.3 miles and moved to the front from fourth over with a half-mile to go. Fabulous Wood’s mother Qualita Bourbon (Love You) was a top trotter in France and won 21 of 31 starts. She landed on $1,790,560 in career earnings.

Ready Cash was the sire of the day since his Fly With Me was an upset winner in 1:57.1 in the Prix Uranie.

Racing under saddle is a big game in France and 8-year-old gelding Arlington Dream really knows how to make a memorable performance on the track. On Saturday afternoon, the son of Ready Cash outclassed his opponents in mile rate 1:54 over 1.3 miles in the $140,000 Prix Camille Lepecq.

As a 3-year-old, Franck Leblanc-trained Erminig d’Oliverie (Scipion du Goutier) belonged in the upper part of the crop among the mares and in the $126,000 Prix Guy le Gonidec she was too tough for the 15 opponents. From position first over, driver Franck Nivard had everything under control already in the last turn and the home stretch became an easy stairwell to the victory in 1.58.2 over 1.7 miles.

A stunning performance made Timo Nurmos’-trained Hachiko de Veluwe a winner in $350,000 Derby at Vermo racetrack in Helsinki, Finland on Saturday afternoon.

Driver Jorma Kontio knows how to win the race for 4-year-olds. The victory with Hachiko de Veluwe was his ninth and trainer Timo Nurmos (both working in Sweden, at Solvalla) was noted for his fifth in the biggest race for 4-year-old trotters in their previous home country.

Hachiko de Veluwe (Timoko) had to do it the hard way before he entered the winner’s circle. Lexus Dream left quickly for the lead and driver Ari Moilanen decided to let his horse stay in that position while he was allowed to keep the pace down midway through the 1.7 miles long race.

With a half mile to go, Lexus Dream was given order to put in an extra gear and in the last turn, the chasing Hachiko de Veluwe seemed to have problems with keeping up the pace behind the leader.

But Jorma Kontio never gave up the game and the son of Timoko disarmed Lexus Dream in the home stretch to victory in mile rate 1:58.