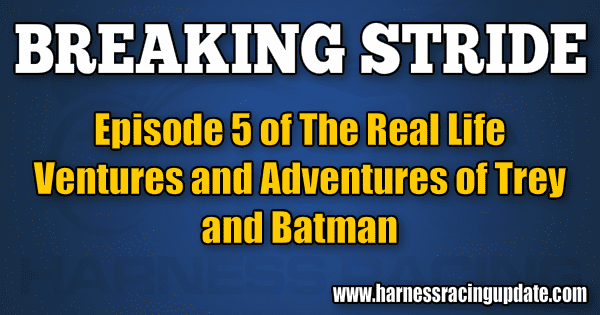 Diamonds in the Haystack

I am a semi-pro in the harness racing yearling game, a founding member of the Big Lebowski Bowling League and Social Club.

He is a member of the retired Dot Com Billionaire Cabal with limited experience in the harness racing game. My job is explaining how to conquer the world as investors in a yearling harness horse, a rather whimsical quest.

I put down my Starbucks coffee and began, “It’s time to talk females.”

He grimaced, “This should be good.”

“It’s time for a few more of Trey’s rules of natural selection. You will be relieved to know that I am much better picking broodmares for stallions than wives. They should have complete pedigree catalogs and videos for dating.”

He chuckled, “That’s good, between us, we’re zero for three in matrimony.

I sighed, “Technically zero for four, but I don’t count my Las Vegas fiasco with Megan the Pagan. Married by Elvis and divorced by Friday should be a mulligan.”

He looked sad and said, “I played 18 years until I became the other man, never had a clue.”

“Hey, you were busy changing the world, things happen.” His marriage history sounded like troubled territory, so I switched gears, “Speaking of mulligans, if a broodmare had a first foal that didn’t make it to the racetrack, that’s okay. But if mom had two babies and neither made it to the races, the third is off our list.”

He said, “Money the family earned is a big factor.”

“To me, money is tricky. If a stallion has 500 foals, his average earnings per foal are in black and white. The female side has a much smaller pool of horses to contemplate. Some people go back in the pedigree to the Pleistocene era. For me, mom and grandma are deep enough.”

“Obviously, you want moms and her foals to show that they made money?”

I shook my head and tried to explain, “I think people get carried away with money won at the fairs and non-stakes races. Remember, we are only playing the staking game. What mom and her kids did after age three is a big toss for me.”

“I noticed that most of the information in the page is about the female’s side.”

“Yeah. Buyers know all the stallions because most stallions are famous, but not always the mares. The mares are more of a puzzle. For example, the yearling we buy will probably race four or five times at two and maybe a dozen at three. Then we are out. The money that a horse makes in that short span can be inflated or deflated.”

“Yeah, a lot of good horses get hurt, especially when they are asked to race at age two. Luck is involved. We had a horse that was lucky in her stakes career. Other horses broke, short fields, soft fields, good posts. She was a nice horse, don’t get me wrong. We had another one, a MUCH better horse. She took a while to get good, then in the few stakes races she had left, everyone was a nightmare. She always drew in the with the big dogs, always drew outside, terrible trips. She had horses in front of her stopping and even falling down.”

“So how do you factor in luck?”

“Keep digging. It’s fun. The computer helps. I look at mom and the brothers and sisters to see where they raced. Sometimes stakes horses can be pretty dang good and not make much money.”

“What about fair horses?”

“In some states, fairs are a non-factor. Our last yearling was from a stallion that stood in a state that didn’t even have fairs. Ohio has a ton of fairs. A few owners don’t mess with the fairs, it might be an ego thing. They breed the horse or move it if it is not top shelf, but most owners and trainers grind out every dollar.”

“Do I look like an aristocrat with excess funding? We are shopping for a sires stake caliber horse, everyone is, but fairs are fun. The people are great. Money is money. It is a bit of a red flag if everyone in the family makes some decent money but it all comes from the fairs.”

“So fair racing is our fallback position.”

“Sure, but in Ohio, we have a level between the fairs and the sires stakes. It’s complicated but this mid-level is a notch below the best.”

“What about first foals, they don’t have siblings to compare.”

“Trey, you keep chopping the list. We may never find anything that fits your rules.”

“Batman you can always find a yearling. I’m trying to find you THE yearling.”

He pulled out his iPad and prepared to type, “Give me your filters so far, I want to create a formula, make your thoughts a little more scientific.”

I said, “We decided this year to play in Ohio.”

“Out of a proven stallion with three crops on the track.

“Twenty grand is our top end.”

I added, “And a brother or sister who raced at the sires stake level.”

“And my friend, I have more craziness TBA.”

“What if you don’t find one that fits?”

“I walk. It’s weird, in real life I have been known to be a tad impulsive, a dash irresponsible, but at the sales I’m a rock. I stay stone cold sober and don’t get horse fever. I don’t have to get a horse, there are other sales.”

“Nope. My lifelong fiscal swamp has formed my thinking about buying horses. I shouldn’t be diverting any of my pitiful revenue streams for wagering on races, golf course green fees or bottled beverages, let alone horse ownership. Breeding farms do not roll out the red carpet when Trey is in the building. I’ve been to plenty of horse auctions with my lists and nothing worked out. I just figure it was not the right Karma.”

“Yeah, I always show up with my Fantasy Island List, 10 horses that I am 99% sure will whiz past my budget limit. But you never know, one time we bought a yearling off the Fantasy Island list, we figured 50 plus, and a filly hung at 12. We got her and were so shocked we thought we bought the wrong horse.”

“Did she race well?”

“Pretty good, best we ever had. That was a huge sale with over a thousand yearlings. For every hit like that horse, we have bought six misses that looked like great deals leaving the sales arena. This is a hard game. Finding a diamond in the haystack is rare. The people buying horses are a very sharp bunch, and they don’t miss much.”

He gave a windshield wiper with his index finger, “The saying is diamond in the ROUGH, or needle in the haystack.”

“Whatever. There will be plenty of painful needles and few diamonds standing in the haystack. We have one more week to dig around. Next week will be my secret sauce, some offbeat stuff that we can add to our formula that just might seal a possible deal.”