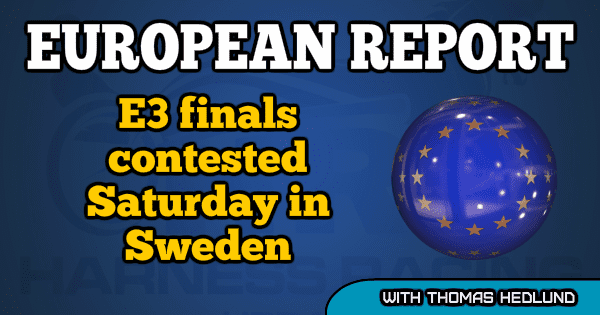 Success, as usual, for Bath

E3 is equal to Svante Båth. That’s once again a fact after Saturday’s E3 finals over the mile at Gävle racetrack in Sweden.

For the second and last time this year, the E3 finals were held in Sweden and the second division of the series for 3-year-olds is about racing over 1,640 meters, approximately a mile.

In the division for mares, Zara Kronos wore the pressure as the favorite after qualifying for this edition and her performances in the earlier final of E3, but an early break in the lead put an end to further success in the $202,000 race.

Last year, Svante Båth trained the winners in both divisions of this stake. Calamara’s Girl and Capitol Hill won E3 in 2017. This year, No Matter (Explosive Matter) was an upset winner after Erik Adielsson found the lead after a jumbly opening of the race where several horses disappeared by making breaks in the first turn.

No Matter was allowed to keep the pace down after the first quarter and Adielsson used the mare’s speed with 300 meters to go, which was enough to get the E3-pokal to Svante Båth’s stable, again. Båth won the earlier edition in end of June with Kiss Francais son Attraversiamo and this victory was more surprising for him.

“We made some changes just to make No Matter a little bit better in hope to get some piece of the price money. I couldn’t figure out that she would be in the lead after 350 meters, but this is how racing is sometimes. No Matter has developed a lot this summer and this was a perfect race for her,” Båth said.

Another Group 1 victory for Riordan

The division for colts and geldings saw an interesting horse in favorite position. Jerry Riordan-trained Betting Gangster (Going Kronos—Viola Silas) has a pedigree that says that he is a star and the victory in E3 proves that he already has reached a high level as a racehorse.

Betting Gangster’s mother, Viola Silas (Lindy Lane), was a star on the tracks herself and she won the shorter version of E3 in 2009. Going Kronos won E3 over 1.3 miles in 2006 so there is E3-blood in the veins of Betting Gangster.

Carl Johan Jepson drove the Jerry Riordan trained 3-year-old and the duo found forth over when the field was set after 500 meters. The attack three wide was set in with more than a half mile to go and Carl Johan Jepson was forced to let Betting Gangster try four wide in the last turn, in chase of horses in front. And the speed was strong at that time, while the leaders started to show lack of gas in the home stretch.

Betting Gangster got the grip of the race pretty easily in mid home stretch and came home in 1:56.2 and earned $101.000.

”He’s just an uncomplicated trotter that has brain, speed and strength enough for races like these,” Riordan said. “At the beginning as a 2-year-old I looked at him and the only thing I really liked about him was his pedigree, but when I first tried him on a track, he did everything I asked of him and for me it’s really satisfying to celebrate this victory with the owners, who are my first Swedish owners since I moved to this country.”