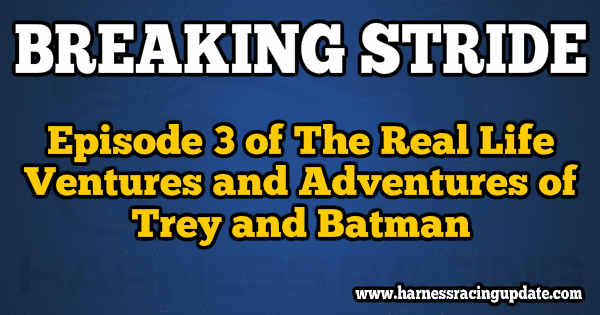 “Did you vote for Donald Trump?”

My new horse partner looked at me across the table at The Brown Derby Restaurant as if I was a bug crawling toward his salad. Slowly, he said, “I’d rather not say.”

“Doesn’t matter, I want to make a point.”

“I don’t care if you voted for The Donald, or for Hillary. Have you changed your mind about either one of them?”

He stated, “People merely reinforce previous decisions and opinions, that’s not news. Where are we going with this?”

“This fall, we are going to buy ONE yearling racehorse out of a huge herd of possibilities. To get to that one yearling, we’ll make dozens of Hillary/Trump decisions.”

“I want you to call bullshit when you hear it.’

He tilted his head.

I asked, “Would you, or would you not, buy a grey yearling?”

He paused and then gave a tentative, “Yes.”

He gave a thinking scratch of the stubble on his chin and said, “My grandfather had a grey racehorse. It shouldn’t make a difference if a horse is white, grey, brown or black.”

“Well, that’s not very logical thinking for a Dr. Spock-ish tycoon, your decision seemed more like a gut reaction, but hey, I’m okay with grey horses. We are a team. Grey is good. Grey stays in our selection pool.”

He gave a salute with his fork, “That was easy.”

“Now that grey horses are officially on our radar, what would change your mind and take a grey trotter off our list of possibilities.”

He said, “Facts, data, information, or logic that shows grey yearlings are not a good choice.”

I shook my head and talked like a fake Frenchman, “Au contraire, my superhero friend. We are members of zee grey team and from this moment forward, facts logic and data will be seen only through our grey eyes. We do not believe this is true, but it is true. Zee human is a strange creature, we rarely change our preconceived impressions. Trumpsters are Trumpsters, Never Trumpsters are Never Trumpsters, and the facts are now flexible.”

He gave a dismissive flick of his hand, “Not for me. Facts are not flexible. If my research shows grey horses are a poor purchase, they go off our list.”

“You will find facts to fit and schools of thought favoring grey horses. Grey horses have been champions. There are schools of thought that might believe a bias in colors has held back the grey line. You will listen to trainers who have had great success with greys with greater attention.”

“You have a point, but this isn’t about grey horses is it?”

“Not really. Right now, there are thousands and thousands of trotting yearlings going to market. We are only going to buy one. Every step of the way we whittle down our choices with Trump/Hillary decisions, mostly eliminations. Some of my decisions will make sense to you, some will seem stupid, but my tendency will be to select based on my prejudices.”

He took a slug from his coffee cup, set it down and said, “You want pushback.”

“Exactly, your eyes and brain are less tainted. Here’s another one: I’m guessing that a majority of potential buyers will not bid on a yearling that was foaled in June because they will be younger when they need to race. Should we bump all the June foals off our list?”

“This time I’m not going to commit, I’d need to study the numbers.”

“Good, that’s what I want, but it won’t be easy. Very few June foals get big money and end up with famous trainers. There is a much smaller pool of June foals, skewed by many factors. But we have to make a Trump/Hillary decision – Are June foals in or out?”

“What do you think?”

I paused and then said, “I keep them on the list.”

“Depends on your idea of logic. Around the time I was looking for my first yearling, I happened to overhear a very famous breeder/buyer/trainer who said that he prefers June foals over January foals. This was not a sales pitch, just a conversation. He said late foals grow up outside eating grass, and he named several June foals that did great for him. This stuck in my head. It’s weird, if I never heard that conversation I probably would have a different point of view.”

He sighed. “Don’t yearling buyers know all this? Don’t they study all these statistics? Hell, don’t they use artificial intelligence and run data sourcing algorithms?”

“I never have, but I’m sure many buyers are scientific. Still, buying baby horses is never going to be an exact science, human intuition and bias will always be part of the process. Batman, I want you to use research and your computers to change my mind if you think I am wrong.”

He snapped his fingers, “And then we arrive at the correct choice using facts.”

I smiled and said, “Depends on your mindset. Look at the White House.”