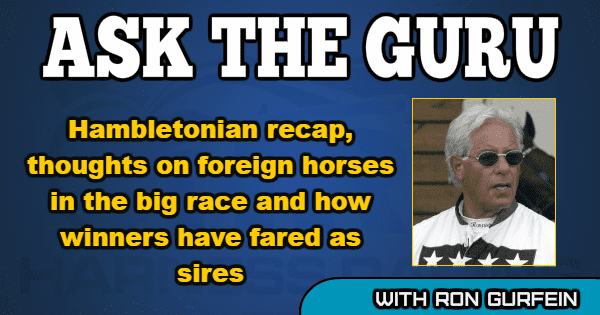 Hambletonian recap, thoughts on foreign horses in the big race and how those that won it have fared as sires

Tidbits: Congratulations to Team Zeron, not only was their filly sensational but there presence on camera was fabulous. I love the honesty of Scotty, telling us he erred in the drive in the first heat. That’s the transparency that we need. With Ricky in tears after the final I found it as heartfelt a moment as I have seen in years.

Gary Siebel and Dave Brower were very professional on CBS and did a great job. Gary’s only mistake was a mathematical error. The in-house production was very good also, Dave Little and Gabe Prewitt were very informative and quite colorful. I found Gabe’s interview with Jeff Gural as good as a Mike Wallace interview as it was quite intrusive. A great example of investigative journalism.

The bad news is that like last year we once again shot ourselves in the foot on National TV. What on God’s earth happens to these drivers when they see the $1 million at the end of the rainbow? Why did the producers of the CBS show, in their infinite wisdom, show a replay of last year’s fiasco forcing Gary and Dave to explain the situation.

Another beautiful moment was when Greg Blanchard asked Jimmy Takter how Wolfgang came out of the race. It’s a good thing Jimmy isn’t like Bill O’Donnell on camera because Billy would have given a WTF. Takter classily and simply answered, “I don’t know.”

I realize there are time constraints so may I suggest instead of showing other races, the CBS production should stick to the Hambletonian and the Oaks and show some vignettes of the favorites in their home environment with a short interview with the trainer and owner if it can be arranged. I really feel it is of great benefit to prospective owners to show up close and personal how much fun and excitement avails itself in our sport.

On the more positive side congratulations to Tony Alagna for winning the Cane Pace with Stay Hungry, it was long overdue but with the Captains Court waiting in the wings he is on the verge of a career year.

Wolfgang and Six Pack should rebound from an unfortunate Saturday and set up one of the most competitive Kentucky Futurities in recent time. Will Atlanta enter the Open division at the Red Mile. Rick’s on a roll and it is definitely a good possibility. Yannick threw down the gauntlet so we may have Manchego enter the Red Mile mix. It’s times like this that I really miss the World Trotting Derby. It certainly would have attracted all four and would have been a major attraction.

If Melander can solve the puzzle of Greenshoe we will see the fastest 2-year-old mile in history at the Red Mile this year as I know of a few that I think can push him to the utmost, including the Brittany Farm-bred, Takter-trained winner of the Peter Haughton, Don’t Let ‘em.

I thought Jeff Gural’s outlook for the Meadowlands five years from now, saying we will have gaming and be back to being the major force in the industry as we used to be, was the most encouraging statement I have ever heard regarding our future.

On a lesser note, it’s sad to me that there were six major trotting stakes, none of which was won by an American-born trainer or driver. In all there were nine major races Tim Tetrick was the only winning driver born in the U.S. This is really nothing new because the great generation of the Meadowlands had Campbell, Lachance, and O’Donnell — all Canadian born — running the show.

My adept handicapping came to an abrupt halt with the Hambletonian eliminations. Not only did I not pick the winners, but neither of my choices made the final. In all fairness, my opinion is that circumstance rather than poor choices doomed me. Wolfgang, I am convinced choked. Yannick had him ready to blast off the gate and when Atlanta looped him leaving on her suicide mission, he tried to put him in a hole and appeared very strong in the face and probably had his air shut off enough to cause the poor performance. Six Pack was just a victim of what may have been the worst drive in Hambletonian history. To drive into a blind switch going for $1 million is almost comical. At 2-5 it killed some pocketbooks.

Looks like there will be no shortage of entries for the Yonkers Trot and the Canadian Trotting Classic.

Thomas Doran asks: Unless I am mistaken, I don’t believe that I have ever seen a foreign- bred trotter in the Hambletonian. Is the race only open to horses bred and raised in North America?

You are pretty much on target. Mostly all of the Hambletonian participants were American-bred although some that came from Europe were sired by U.S. stallions that were exported like Sugarcane Hanover and Mack Lobell. Any horse born anywhere can be made eligible to the race as long as he is nominated and a registered standardbred.

The first horse to return to the U.S. was Shatter Way from Sweden in 1966, he finished 4-3 for Olaf Widell, the next was Top Hanover from Italy in 1971. The 1992 foal of royalty (Mack Lobell—Delmonica Hanover) Easy Lover S came in 1995. Kramer Boy kS followed in 1996. Scarlet Knight, a product of Perretti Farm, was purchased by Stefan Melander trained in Sweden and returned to America to win the Hambletonian with Melander in the bike. Until that time, Stefan was regarded as a world famous equine photographer. There were a few others like this, but there were two horses that were of European blood, Victor Gio foaled in Italy sired by the French stallion Ready Cash and International Moni by French sire Love You foaled in Connecticut at Lindy Farm. Out of the great Moni Maker he was a product of transport semen. My personal thanks to Moira Fanning for helping me with all the Hambletonian questions. You have eased the pain of severe research.

Seth Poppel (contest question): I am going to shorten his voluminous question because of word constraints. He basically asks with a colt like Tactical Landing would you baby him or go all out in the big dance?

To be honest, before the race my answer would have be slightly different, but after the fact it’s easy to discuss. For certain, Takter knows the horse far better than I do.

He was very careful with him in the first heat and because of a clever drive and ridiculous circumstances was able to prevail.

However, although cautious at the start in the final, he was hell bent in the lane to win and showed that the horse has really come along way. From mid stretch to the wire he was driving him like a hoppled pacer. I can’t answer if it was out of desire of the moment or total loss of memory.

To me, the only thing in his way of winning the whole enchilada was lack of racing. That was his only lifetime stake appearance. If he stays together mentally and phsically he will be a force to reckon with down the road.

This question was soooooo bizarre I had to print it. Where have you been the last 30 years? Joel has asked some wonderful questions in the past so this was a shocker.

With the exception of Valley Victory, who was sick and unable to perform in the race, I would say most of our greatest sires were Hambletonian winners.

Going back almost 50 years I will start with Speedy Crown and Super Bowl, truly the modern era foundation sires. At the end of that decade we had a few decent sires in Bonefish, Green Speed and Speedy Somolli. The ‘80s produced some bad ones in Speed Bowl, Prakas, Mack Lobell, and Harmonious. But from the ‘90s to today we have seen by far the best of the best. My two colt winners, Victory Dream and Self Possessed, were both fine sires and both quite unfertile, Muscles Yankee is still going well today, and the ill-fated Windsongs Legacy was fabulous with a short lived career. More recently Donato Hanover and Muscle Massive have been productive.

Maybe the best of them all and certainly the best on the racetrack Muscle Hill has proven to be a game changer on both sides of the Atlantic. No sire to date has accomplished what he has in a relatively short period of time. He has sired the winners of almost every major race imaginable and has created a new parameters for speed in the equine athlete.

Please don’t get me wrong the are other great sires, recently Chapter Seven would enter the ranks of top sires that didn’t win the Hambletonian, as well as Cantab Hall who finished second after being very sick for almost a month previous to the race. I was merely answering a odd question.

To all my readers thanks for the kind words. Please keep the questions coming in.

The Yonkers trot could prove to be more interesting than usual this year and the Canadian Trotting Classic could be a fascinating affair in early September.