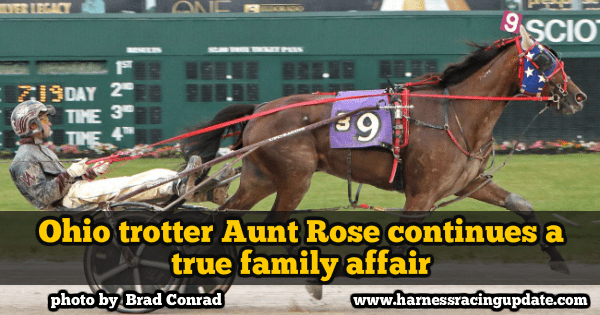 Trainer Chris Beaver enjoys finding bargains at the yearling sales. But when he sees one he likes and it has a family connection, Beaver is willing to open the checkbook slightly wider. Such was the case for Aunt Rose, a 2-year-old trotting daughter by Uncle Peter.

“I had some partners that were game to go a little higher on an Uncle Peter,” said the 46 year-old Delaware, OH-based conditioner. “We kind of had our eye on the one that (Ron) Burke ended up paying $150,000 for (Tu Eres Mi Corazon). Aunt Rose was our second choice. She’s a really impressive filly to look at. She’s really strong and well put together. There wasn’t much you could fault her on. Those qualities usually adds to the price.”

Uncle Peter was bred and sold as a yearling by a group that included Chris’ mother, Johanna Beaver and Carter. Uncle Peter was sold as Pick Up The Tab at the 2010 Lexington Select Sale for $60,000.

The equine Aunt Rose has not disappointed in her first two career starts, the opening two legs of the Ohio Sires Stake.

At the July 3 opening leg, driver Ronnie Wrenn, Jr. sent Aunt Rose right to the lead and the pair cruised to a 7-length victory in 1:59.1 over the Northfield Park oval.

“We have won quite a few sires stakes that way,” said Beaver “We would get away from them in the last turn and coast home. That is what Aunt Rose did. She won that race very easily.”

The second $40,000 leg was contested at Scioto Downs on July 20 over a sloppy track. Saddled with the outside post #9, Wrenn was forced to race Aunt Rose from off the pace. The pair sat fifth after the opening quarter of :27.2. Aunt Rose was eased off the rail and picked up cover, grabbing the lead in the final turn and coasted home, winning by 4 ¼ lengths in 1:59.

“She has done everything in hand. She hasn’t been tested,” said Beaver.

Aunt Rose will look to remain perfect on the season during tonight’s $131,600 (div) Ohio State Fair Stakes at Scioto Downs.

Aunt Rose drew post 5 in the first of three divisions and has been named the 5-2 morning line favorite. Beaver also sends out Stone In Love (post #6; 7-2 choice) in the same race and four other entries in the remaining two divisions.

“Stone In Love has been finishing really good. She has the ability to keep up with Aunt Rose. I really like her a lot. She trotted home in :28.4 in her last start at Scioto. Aunt Rose is a little handier and she can get a jump on them like the first two races.”

The Ohio State Fair Stakes concludes a very busy period of time for Beaver. During the past week the Beaver Stable has made 44 starts at 10 different pari-mutuel tracks and county fairs. The stable has recorded a 14-11-4 mark in those 44 races, a .487 ratings clip.

“It is an incredible amount of work for what is going on right now.”