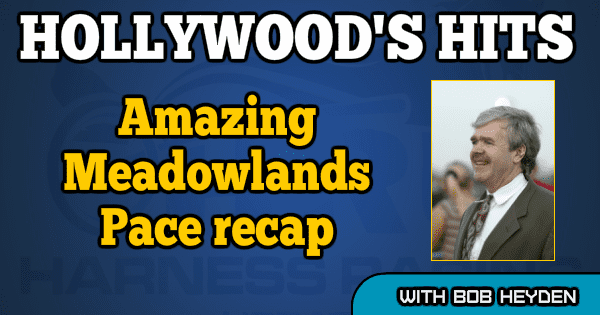 Amazing fact about the 2018 edition of the Meadowlands Pace: None of the check-getting drivers had ever won the race before:

1. Jim Miller in 1979, the trainer/driver of Tijuana Taxi, was the first to hit the board-(third).

2. Delvin Miller – trained Tyler B was third in the 1980 in history’s first ever million-dollar race.

3. Andy Miller debuted in 2006 with a solid effort (second) with My Boy David.

4. Brett Miller got things going with a solid second, just missing catching Control The Moment in 2016 with Racing Hill.

5. David Miller got the Millers on the board with his 1:47.1 breakthrough effort last Saturday with Courtly Choice.

Art Major sired the 2008 Pace winner Art Official and the 2018 champ with Courtly Choice. It should be noted that Art Major is the single richest money-winning sophomore pacer of all time not to race in the Meadowlands Pace (2002 – $1,562,779).

Brian Sears won the Haughton in 2008 with Mister Big and again in 2018 with McWicked.

The trifecta in the Golden Girls was the second highest ever recorded at the Meadowlands — $87,383.40 Divas Image (Joe Bongiorno) over both Inverse Hanover and Pure Country.

David Miller became the first driver to race in the Meadowlands Pace as both the youngest in his field that year and oldest. In 1995, he was fifth with Cinder Lane Sam age 30 (Peter Wrenn was the next youngest at 32). This year, Miller was 53 when he won with Courtly Choice (Brian Sears was next oldest at 50).
Where does age 53 rank on the all-time list of Pace-winning drivers?
56 Cat Manzi – 2006 Artistic Fella 55 Ron Pierce – 2011 Roll With Joe 54 Billy Haughton – 1978 Falcon Almahurst 54 Buddy Gilmour – 1986 Laughs 53 Dave Miller – 2018 Courtly Choice

Muscles Yankee, with this the 20th anniversary of his outstanding Hambletonian-winning season, was the grand-sire of many stars who were shining quite brightly July 14, 2018.

Muscles Yankee’s Muscle Hill sired two other stars — Manchego who just got nostriled out in the great photo with Manchego in her Del Millier try, and Ariana G, who won the Hambletonian Maturity.

Plunge Blue Chip (1:49.4) joins J L Cruze as the fastest ever Meadowlands trotter — regardless of age or sex. This marks the first time that a female has held or co-held the all-age track standard since July 8, 1994 when Beat The Wheel upended Pine Chip in a 7:30 Non-betting event in 1:51.4 — a track and world standard. Oddly, J L Cruze had qualified earlier in the day in 1:52.3, winning handily.

McWicked improved to $2,882,112 in capturing the Haughton final. In doing so, he surpassed a parade of stars and superstars on the all-time earnings list: Burning Point, Bunny Lake, On The Road Again, Shark Gesture, Bettor Sweet, Riyadh, Rock N Roll Heaven, Rocknroll Hanover and Art Major.

27-for-32- is the combined career records of Machego and Plunge Blue Chip after their epic duel to a 1:49.4 nose world record in Saturday’s Delvin Miller. The top two in the 2017 ballot had never met before and this was more than worth the wait.