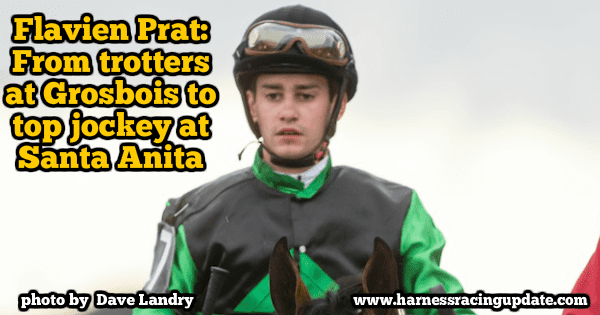 Flavien Prat literally had the world of harness racing at his doorstep as he grew up at Groisbois Training Center, approximately 11 miles southwest of Paris. Instead, he chose a path that ultimately led to thoroughbred racing and a career as one of the top young jockeys in the United States.

Prat’s father, Frederic, trains 15 to 20 trotters every year that he maintains in a barn so close to the family’s house that it almost served as an extension to their residence.

He mucked stalls as a boy, learned to drive and handled whatever else his father needed. He became so familiar with the ways of different trotters that he came to regard them as pets.

Although Prat gained an appreciation for harness racing and greatly respected his father’s hard work, he never seriously considered that sport for his livelihood. The lure of thoroughbred racing was too strong to resist.

“I wanted to try a different path,” he said.

And he never looked back.

He rode his first winner at Fontainebleau, France in September, 2009. That same year, he was honored as the top apprentice rider in his native land. But his career leveled off once he lost his apprentice status; opportunities with good horses were difficult to come by.

He occasionally competed in the United States before moving to the Southern California circuit full-time at the end of 2014. His perseverance would soon be tested by a racing accident that sidelined him for almost four months, half of them spent in a body cast.

How did he respond? By using the time off to enrol at the Berlitz School in Pasadena to gain command of the English language.

The fortunes of the 5’3”, 116-pound jockey have risen steadily since his return. He credits Hall of Fame trainer Richard Mandella for helping him to showcase his talents.

“He had faith in me and gave me some great opportunities,” he said. “That makes a big difference.”

Prat recently won the riding title at Santa Anita, which features a talent-laden jockey colony. He is aiming for his third consecutive crown at Del Mar’s prestigious summer meet. Bottom line: His willingness to change continents paid off in a big way.

“I had lost a bit of confidence,” Prat said. “But by making that move, I forgot about what happened and just moved on.”

Not surprisingly, his father approves of his career choice. “At such a young age, to be racing at the highest levels in the world,” Frederic said, “his mother and I are very proud.”

He never pressured Flavien to follow his lead. “What I really wanted for my son was that he find a job that he was passionate about and when he woke up in the morning, he knew that his business was important to him,” he said.

Frederic retains his independence by owning at least 75 per cent of every horse he trains. He is assisted by Flavien’s brother Alexis, 22. Flavien remains emotionally and financially connected to his father’s business.

Seemingly bad luck turned very good when Andrea, a filly he partially owned with his father, had her promising racing career end prematurely due to a cut tendon. She was sent to prized stallion Timoko and her foal, Folelli, became a Group 1 winner when she took the Criterium des Jennes in February at 17-1.

“He’s a natural. He’s as natural a rider as you can find,” said Derek Lawson, Prat’s agent for the last four years. “Everything he does on a horse, he doesn’t even have to think about it. It’s just reactionary.”

“He’s got great hands,” Lawson said. “He has a great seat.”
Prat noted that thoroughbreds tend to be more high-strung than standardbreds. He also said, “At the end of the day, horses are horses.”

Understandably, he is setting his goals as high as they can possibly be.

“The Kentucky Derby is one of the races you’ve got to win. The big races, that’s where you want to be,” he said. “You never get enough.”