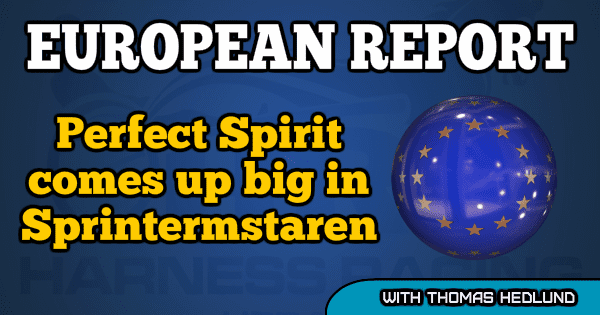 The $290,000 Sprintermästaren for 4-year-old trotters were held in Halmstad, Sweden on Thursday night and the race was a spectacular show.

Calle Crown (Great Challenger) held the heavy favorite, Hambletonian winner Perfect Spirit, (Andover Hall) on the outside in the first elimination and that was the winning move from driver Christoffer Eriksson. Calle Crown left his antagonist with a quarter of a mile to go and won by two lengths in 1:53.1.

The second elimination did not compare to the first one, at least not regarding the pace in the race. When favorite Hazard Boko (S.J.’s Caviar) reached the front after a little more than a quarter into the race, driver Per Lennartsson slowed down the pace remarkably.

Hazard Boko sprinted home the victory in moderate a 1:56.3 mile.

Enterprise (Chapter Seven), third in Hambletonian last year, shadowed leader Super War Horse in the third elimination and got opportunity to show his ability since the horse racing first over was out of power in the beginning of the home stretch. Björn Goop drove the Stefan Melander trained trotter to victory in 1:55.4.

The draw for the final was unusually interesting after the three heats. Enterprise got post one, Hazard Boko two and Calle Crown three and after the first heat, where Perfect Spirit never got close to challenge Calle Crown, something had to be done to make the Hambletonian winner better for the final.

Leader Enterprise was a beaten horse with 200 meters to go and Lucifer Lane, who got a trip behind the leader, looked to be the winner before Perfect Spirit, once again accelerated impressively and the 4-year-old son of Andover Hall got his nose first at the wire.

The winning time was 1:53 and Lucifer Lane finished second, ahead of Super War Horse, who held strongly from position first over.

”I was worried, really worried after the elimination. I didn’t like to show the horse in a shape like that. Everyone has seen what a good horse Perfect Spirit is, he won Hambletonian last year after all, and I had no good feeling in my body,” Redén said. “So something had to be done and we did some changes in the equipment for the final. And Perfect Spirit is a special horse. In the warm up I didn’t show him the big track today, so in the elimination he wasn’t there. The horse was not in the game and Örjan noticed directly in the parade before the final that Perfect Spirit was a new horse.”

Perfect Spirit has now won two of the biggest races for 4-year-olds in Sweden this year. In May, the son of Andover Hall won the Kungapokalen at Åby racetrack.