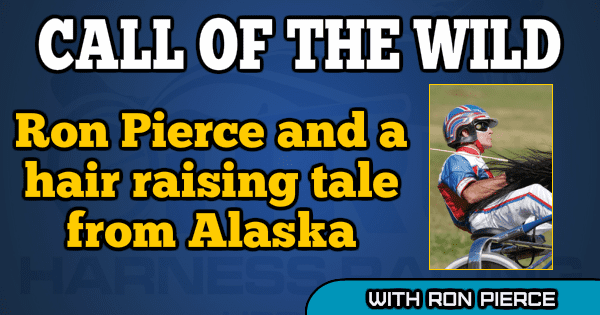 Retired Hall of Fame driver Ron Pierce was cruising through Delta Junction, Alaska on Thursday afternoon when he took advantage of having cell phone service to check in and drop a bombshell.

“Everything is going great. You know what else? My hair grew back! I’ve got a full set of hair again,” 61-year-old Pierce said, excitedly, proving that being immersed in the wilderness really is his magic elixr. “I think wearing a helmet every afternoon and night, all day long wore the hair off the top of my head.”

Thursday was the first time in five or six weeks Pierce has “been off the mountains.” He was heading for Fairbanks to pick his brother, Artie, up at the airport. The plan is the two of them will try to extract the gold Ron has found.

“I’ve been doing a lot of hiking and gold prospecting. Now, I’m into some mining. I’m doing pretty well. You do the prospecting before you do the mining and then, once you locate the gold, you’ve got to mine it out of the earth and that’s when the work starts,” Pierce said. “I’m sure something exciting is going to happen pretty soon. I might win the Hambletonian of gold pretty soon, you know what I mean? So far it’s just been a few ounces this year, but I’m just starting now.”

Pierce, who retired from driving in 2015 after he won 9,570 career races and collected purse earnings of more than $215 million, said the weather has been, “cool and damp, but now it’s warm and beautiful. It’s been a little hot today, 81. Oh yeah, and blue skies. You can see for 150 to 200 miles. It’s very pristine up here.”

Though, not all of Pierce’s adventures have been tranquil.

“The only thing that happened, and I’m not real high about it, is that a bear stuck its paw through my window the other night. He tore a hole in my screen, so I’m going to…. Well, he won’t do that again,” Pierce said a little ominously. “I didn’t see him, but I think it could’ve been a young, black bear. It wasn’t a real big bear, because I saw his tracks. I think I scared him off. If I didn’t, then I will… I’ve had my share already with the bears.”

When last we left Pierce (full story here), he and his mother were just about to attend the National Rifle Association convention in Texas with his mother.

“We had a blast,” Pierce said. “My mom had a wonderful time. She got to meet Charlie Daniels, Travis Tritt and Donald Trump, Jr. She had a ball. Then, also some relatives and friends that she hadn’t seen for many, many years. It was a wonderful trip for her… I had fun, too. I loved it.”

As for other family members, Pierce reports his two sons, Jesse and Keith, are “doing great.

“My youngest son (Keith), he has a lobster boat now. This is his fourth year with it and he’s making good money, catching lobsters and selling them,” Pierce said. “My oldest boy (Jesse), he’s into construction and also rides professional motorcross.”

Pierce’s plan for the rest of the summer is similar to last year when he stayed in Alaska until early fall before moving to California. Though, unlike last year, he thinks he may skip killing a moose to put in his freezer for the winter.

“I’ve still got moose meat from last year and I’m kind of getting moose-meated out. You can only eat so much moose or meat. Too much anything is not good,” Pierce said.

Other than that, Pierce said life is truly beautiful.

“I am loving it,” he said before asking who won the North America Cup and being delighted to learn it was won by Later Up driven by Montrell Teague and trained by Clyde Francis of George Teague’s operation.

“Tell everybody I said ‘hello’ and I wish them luck.”

With that Ron Pierce disappeared into the wilderness again promising to check in again when he could.