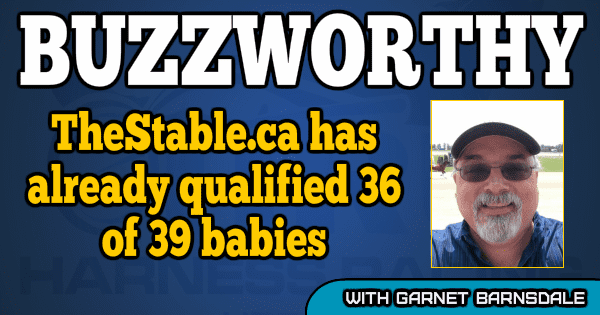 TheStable.ca has already qualified 36 of 39 babies

The Stable.ca has been making a buzz on the track, not only with stable star Lawmaker, but also with their 2018 crop of babies.

It didn’t take long for The Stable – a fractional ownership group operated by Anthony and Amy Macdonald — to notch their first stakes win as Rockin Ron’s half-brother Holden Steady front-ended his way to a 1:59.4 score in the $30,350 Cardinal Stakes at Hawthorne Friday night in his pari-mutuel debut.

Holden Steady, a handsome roan gelding by Yankee Skyscaper out of the Sportsmaster mare I’m All Roan is one of three Illinois-breds that The Stable will race this year. They have two rookie trotting fillies set to race tomorrow night in the Violet Stakes for Illinois-conceived foals, also being contested at Hawthorne. Ivanka and Notnangel will be sent out by conditioner Angie Coleman, who is training all three Illinois-breds for The Stable.

In addition to the early win, The Stable has also had an impressive string of qualifiers in the past couple of weeks, headed by a 1:55.4 score by Ohio-bred We Will See colt See You In Tuscany on June 9. See You In Tuscany, bought for what appears to be a bargain of $10,000 U.S. at the Buckeye Yearling Sale last September is out of the Mcardle mare McDance Desire and he showed plenty of desire in the back half of the qualifier, pacing home in :55.1 with a 27-flat kicker. That triggered a flurry of immediate action on The Stable’s sale board with shares of the colt that were priced at $500 by an owner getting grabbed up fast. The fluidity of The Stable’s market is one of its prime features, according to Anthony.

“We’re not trying to build a chop shop,” he said. “What we are trying to build is a place where people can invest their money in a multitude of different ways and it allows you to free up money if you decide you want to buy a different horse or two.”

Some of those people are Marc and Michelle Treffi who drive back and forth frequently from Glens Falls, NY to watch their horses train and race. “We’ve put more than 15,000 miles on our car in the past year doing it,” said Michelle.

“We do it because we love our babies,” added Mark who were in Tioga Friday night to watch Cruising In Style race in the New York Sires Stakes then came to Mohawk for the North America Cup.

MacDonald says that The Stable has send 39 babies to the gate so far and qualified 36 of them with eight more set to qualify and six currently turned out. “I believe that we have a direct path for all 53 to qualify in 2018,” Macdonald predicted confidently.

The Stable’s star, Lawmaker, who earned $166,000 in his rookie campaign was fifth in the $266,000 Goodtimes Final on Saturday, was doubtful for the race after being caste in his stall six weeks ago and sustaining an injury. But he contended and picked up a good check for his ownership group and early indications are this could be a banner year for The Stable.ca.