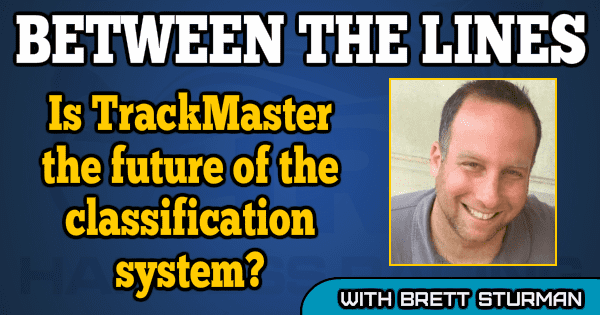 Is TrackMaster the future of the classification system?

The TrackMaster company is best known in harness racing for being an exclusive provider of electronic past performances to the sport. Within its past performance products, it also produces handicapping tools in the form of various rating measures.

Now, TrackMaster’s speed ratings are being given a shot as a way to possibly re-write the decades old way of classifying horses based on earnings. Beginning with the new meet at Ocean Downs that began last Sunday, the non-winners of money races have been replaced entirely with classifications guided by TrackMaster ratings.

The concept behind the classification is that a horse is assigned a speed rating for every race (with a couple exceptions noted later), and then those ratings become averaged to form a horses rating at time of entry.

While the speed rating itself is a proprietary methodology, TrackMaster president David Siegel describes it in a manner consistent with what I’d call standard speed figure making 101.

“Simply put, the underlying speed rating is a number that normalizes horse’s times across all conditions,” Siegel said. “So, if you raced to be an 80 at Rosecroft, you’d equate to an 80 at Hoosier.”

The idea here is to give horses a rating based on their overall ability and then use that to form fields against horses of comparable ratings.

Siegel has received only limited feedback from the tracks using the ratings, but so far early indications have been positive.

“There’s a couple ways I plan to measure the effectiveness of this over time,” Siegel said. “The first one is the most objective way – and I don’t have enough data to do this yet – but it’s to look at the standard deviation (the overall spread) between the odds in a race. I would like to take a look at the equivalent non-winners races from a year ago and see something like what percent of horses go off at below even money or greater than 30-1, and see how much more compact the odds have become. That would be the ideal goal.”

It’s a very limited dataset, but in looking at the first two cards from Ocean Downs this past Sunday and Monday you can’t deny that the ratings haven’t produced evenly-matched fields. Half-mile tracks tend to produce a large amount of heavy winning favorites, but that didn’t come close to happening through the first two cards. Through 11 races on Sunday that used the TrackMaster ratings to classify, there was only a single winning favorite. Nearly all favorites were above even money and four horses won at 7-1 odds or over (two of them were double digit odds).

Amazing, it was more of the same the very next day on Monday. Not a single favorite won in six races that used TrackMaster. In fact, winners in those races included horses at odds of 11-1, 7-1, 6-1 and 22-1. Those numbers are unheard of for a half-mile track.

While the underlying speed rating formula remains private, everything else about the process is entirely transparent. The TrackMaster site lays out the exact criteria that states how final ratings are produced and which races are taken into factor. For example, races from a year ago (if less than 10 starts in the last 150 days) are weighted differently than races last week. Also, races for a horse that includes a break or interference are not included in the ratings for that horse. Further, TrackMaster uploads a publicly available data file each day to its site that shows the current daily rating for every horse in the country.

One could argue that the ratings as a means to classify is only as good as the ratings themselves, and historically the use of speed figures in thoroughbred and harness racing has been debated. Anyone could question a specific rating and it’s obvious that abnormalities are bound to occur, but I think it’s fair to say that overall the ratings produced by TrackMaster are at least directionally accurate in providing evenly matched fields. The earliest of the preliminary results validate that.

Perhaps the best thing to come out of the implementation of the TrackMaster ratings is that it could be harder for horsepeople to play games with the condition sheet. We all know the game played in finishing in a certain spot to have an exact amount of money drop off your card to fit a lower condition next out, and these ratings will make it much more difficult to do the same kind of manipulation. Sure, you could try to not win in a blowout or you could greatly slow up your horse if already well beaten, but one race doesn’t have the same impact in an overall TrackMaster average that finishing sixth in a race would be and dumping $8,000 off your last-five-starts card in a single race.

A note that Siegel communicated to me is that TrackMaster only provides a horse and a rating to the tracks, but what tracks do with that information from there is up to them. This is important because racing secretaries should still serve as the “human” component in this and be able to make adjustments if need be. For example, what if there was a barn change on a horse and he went from a rating of 70 two starts ago to a rating of 100 in his new stable. The horses average might still only be 75, but a racing secretary would need to be part of the equation to hopefully know that this horse should now be classified closer to a 100 than a 75 due to his change in environment.

The TrackMaster ratings may not be the absolute perfect indicator of a horse’s current ability, but all in all I’d say it’s pretty good and certainly better than other classification alternatives. In an industry slow to embrace technology, the ratings as a means to classify are a welcome change.