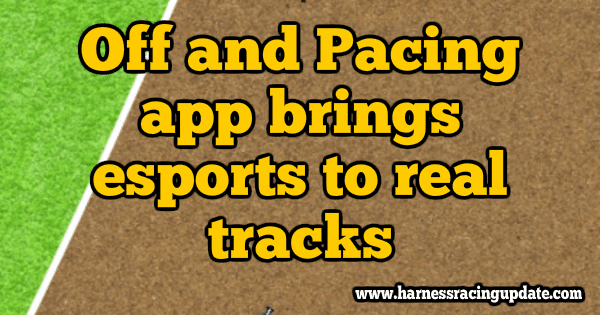 Off and Pacing will host live esport stake at Hanover Raceway

The rise of esports is as real as the National Hockey League preparing to play host to its 2018 Gaming World Championship finals at the Esports Arena Las Vegas at Luxor Hotel on June 19. Harness racing’s presence in the esports world can be summarized in three words: Off and Pacing. The sports management game for mobile devices debuted in early 2017, conducting its two-millionth virtual race last month.

After informal stops at a few racetracks last summer, the Off and Pacing team wanted to bring the game to fans in a fresh way. July 21 will be “Off and Pacing Night” at Hanover Raceway, complete with a live OaP stake race open only to game players in attendance at the real-life Ontario track.

“Hanover just got a new tote board too — they wouldn’t have been able to do this last year,” said Landon Mulhall, marketing coordinator for The Farm Ventures, the start-up behind Off and Pacing. “Georgian Downs is really interested too, so we’re probably going to have one there.” With 26 of the 59 tracks in the game being authorized digital replicas of actual harness tracks, Mulhall said it’s a foundation for further live OaP events.

The OaP Facebook group has about 2,000 members. When they voiced interest in meet-ups, the destination was obvious: “They started to say, ‘Hey, we should get together at the track!’” said developer/founder Ryan Clements, laughing. “They self-organized, in a lot of ways.”

Screening virtual races on an actual tote board, with a live race call, is one more way of integrating Off and Pacing players into what can be considered the esport version of harness racing. A game with no gambling element, OaP does not put players in the digital sulky, but allows them to acquire and campaign horses in the game’s four geographic zones (Canada, USA, Australia, and New Zealand).

There are 106 stakes races in OaP, which thousands of players try to enter and win. By making the Hanover Raceway stake open to on-track entrants only, there is incentive for game devotees to attend live. If they want to expand on the OaP experience, the Hands-On Horses’ Wanna Drive program will be offering jog cart rides that evening.

It‘s been Clements’ goal to connect his games to racing promotion. “That’s at the core of everything we’re doing as a company,” he told HRU. “More than just the game itself, trying to show that the sport has a future. We believe in it; we’ve sort of proved it, in that a start-up out of nowhere in the harness racing industry, based in Canada, has been successful. Nobody would suggest starting a company in the harness racing world today; most people seem to be running for the doors.”

With a customer/player base continuing to expand in atypical ways — Mulhall noted OaP’s unexpectedly high popularity in Morocco — its creators are turning their attention to future offerings.

Those details aren’t ready to be revealed, although they have nothing to do with OaP being replaced. “We’re growing because we can, because it’s been successful,” said Clements. “We plan to continue down this line and grow, and hopefully have a greater impact in the sport. […] We have roughly 2,500 people who log in every single day. In a given month, we’ll have about 9,000 who open the app at least once.”

Making tracks for the Cradle of the Trotter is also on his agenda. “I’ll be going to the HHYF camps to speak this summer, in Goshen. The USTA (youth) delegates are invited as well. We’re just looking to do our part.”

Keep calm and pace on. Watch for more developments from The Farm Ventures, but don’t worry about the future of Off and Pacing, said Clements. “In mobile games, your product is never finished. You release the game and you keep building it.