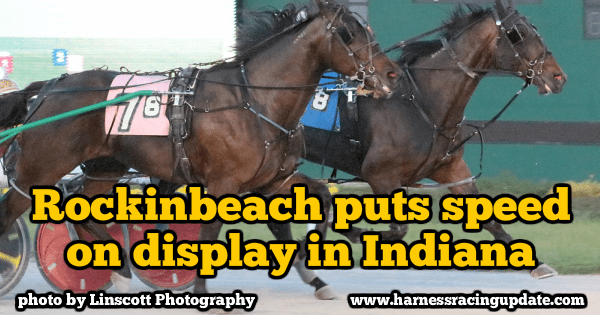 Speed on display in Indiana

The month of May in Indiana, particularly the last weekend, is all about the Indianapolis 500 and racing at the historic Indianapolis Motor Speedway. On April 25, however, Hoosier Park Racing & Casino offered some thrilling horsepower of its own with the opening leg of Indiana Sires Stakes action for sophomore pacing colts. A quartet of divisions were contested, and it was homebred Rockinbeach that turned in the fastest mile of the eliminations, a 1:50.2 effort. It was a big win for a big colt that has emerged from the shadows last season as understudy to the likes of Shnitzledosomethin, GD Western Joe and Always Bet De Grey.

“He had a great year last year. There’s just a couple other ones born the same year a little better than him,” said his trainer, Jamie Macomber. “Shnitzle(dosomethin) and GD Western Joe got the attention last year. He just sat in the back out of the spotlight. He came back exactly the same as he left last year. As soon as we qualified him we knew he was back and similar to what he was last year. I’m excited.”

As a freshman, Rockinbeach collected a pair of ISS wins and $93,750 in seasonal earnings over 11 starts, but took a back seat to some of the other more prominent colts in the division. The son of Rockin Image, out of Jenna’s Beach Boy mare Miss Sandy Beach, qualified for four of the five $75,000 finals, registering a pair of runner-up finishes to go with a third and fourth-place effort. In the $220,000 Super Final he raced sixth for Macomber’s husband, Ricky. All told, Rockinbeach finished second five times in 2017 to go along with his two wins. Not a bad record for a gelding that presented challenges for his owner and breeder.

“We had our hands full. He could get out of control very easily last year, way more so than this year. He’s a little bit of a handful yet, but he’s not bad. He’s getting there,” said Wilbur Eash, who developed the pacer at his farm in Topeka, IN before sending him to Macomber. “I would call him high strung. You know how a young horse is; you let him roll out of there and then you really have your hands full. Ricky and Jamie have just done a really nice job with him, keeping him under control, and just taking him back and letting him race home.”

That’s just how they started the 2018 campaign. Getting his start in the Hal Dale series at Hoosier Park, Rockinbeach was raced conservatively, coming off the pace to claim a $9,000 division by a head in 1:53.3. The next time out he finished second to Always A Prince by a length and a half, but those that paid attention saw something special. Racing last in the field of six throughout most of the mile, the gelding stormed home in 25 seconds flat, race timed in 1:50.4.

“He was flying that night. To look at him, he’s just big and awkward. It’s amazing he can go that fast,” Macomber commented. “He loves the last quarter. As soon as you turn for home he just goes, whether it’s straight, crooked or anything. I’m trying to get him as straight as I can. He’s not too pretty, but he’s fast.”

And that’s what makes Rockinbeach special, and different, from the rest. While other colts may appear more polished on the racetrack, this sophomore is still rough around the edges. He is big, prone to stumble from time to time, is unpredictable, and keeps Macomber and her staff on their toes. Pacing home, he is just as apt to be looking sideways as he would be focused on the wire. It’s part of his personality. As the trainer has worked to make adjustments, like adding a head pole, the gelding has shown he can be downright defiant.

“It doesn’t work, he just locks on the line even worse. He runs in even harder,” she added. “He’s stubborn; he runs in, and he doesn’t want any help steering him.”

As of late, Macomber said she has added an Australian belt to help manage the pacer, and that appears to be producing better results. In Friday night’s $20,000 elimination, Ricky Macomber left from post position two and secured a place in third behind Always A Prince and Jims Perfect Ten. The 6-1 second choice would patiently bide his time there until the stretch. Once in the lane, Rockinbeach took advantage of the passing lane, firing home in :26.1 to put a head in front of the previously undefeated Always A Prince. The performance punched his ticket to next week’s $75,000 final. The trainer believes he can be among the best in the division this season if he continues to improve.

“I think he’s going to be in the group, I think he’ll be in the top three or four,” she said. “He’s a sound horse. We haven’t had to do anything to him, we don’t have to worry about anything. If he just keeps maturing day by day, he can only get better.”

The competition is going to be tough and there will be no “easy” rounds. In the opening eliminations, a total of 12 horses registered miles in under 1:52. With that many fast horses, Eash believes that any horse is beatable and that post position and trip will factor heavily into who reaches the winner’s circle. Macomber expects that the division will only get faster as summer goes on.

“I think it’s going to be a real long summer and I think this group of horses just got even better than they were last year,” she said. “It’s just going to be a tough season for those three year olds. We’re going to see some crazy miles I think. It’s just who can stay healthy and who can stay sound.”

Rockinbeach finished second in nearly half his starts last season. Can he improve upon those placings this summer? He’s off to a good start so far.