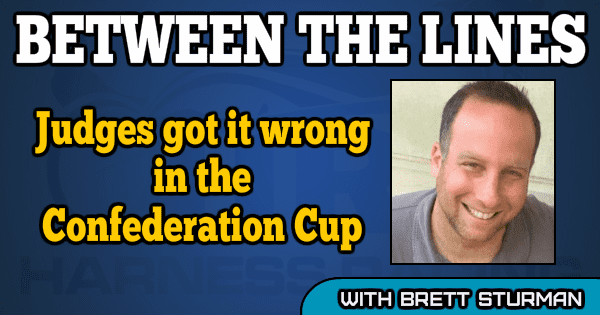 Judges in racing are an easy target and you can pick on them almost any night of the week, but the ones who oversaw Confederation Cup XL this past Sunday at Flamboro Downs came away with the wrong ruling.

In the $182,500 Confederation Cup final, heavily-backed Filibuster Hanover was able to hang in there in 1:51.4 before a surging Western Joe could reach from the inside as the second choice in wagering. It was less than a length to third-past-the-wire finisher Eddard Hanover.

The AGCO Senior Judges report for that night acknowledges that Filibuster Hanover was all over the place around the final turn as it reads, “The Judges ruled that #3 Filibuster Hanover hits three pylons, is inside one pylon and then hits one pylon.”

All told, Filibuster Hanover is ceded by the judges to have a combination of hit or went inside five pylons. How did he stay up as the winner then? AGCO rules state that you’re allowed to go inside a pylon (and by the judge’s decision, implicitly hit as many as you want) provided that you don’t gain an unfair advantage.

Judges could have used this interpretation of the rule as well, but chose not to: “If in the opinion of the Judges a horse while on stride, or part of the horse’s sulky, goes inside a pylon(s) and that action gave the horse an unfair advantage over other horses in the race or the action helped improve its position in the race, the horse may be placed at the discretion of the Judges.”

There’s a couple problems here. Can you really say that a horse that interferes in some degree with five pylons around the final turn and wins by a half-length didn’t gain an advantage?

As for Western Joe, he did more clearly go inside two pylons which automatically places him behind any horse that’s lapped onto him at the finish. In this case, Eddard Hanover.

It’s hard to say if Western Joe going inside two pylons was attributed at all to him following right behind the path Filibuster Hanover who was going inside or touching at least 5, but it probably didn’t help his cause much regardless.

I’ve watched the replay 20 times now frame by frame and the most amazing thing is that the judges could determine with the precision they did which pylons Filibuster Hanover touched and which ones he went inside.

It’s virtually impossible to tell for sure, but it’s not out of the realm of possibility that he touches at least six, and goes fully inside at least three of them. It’s obvious in some cases where you see the pylon move, but you don’t know for sure if the wheel is hitting the outside or inside of the pylon. And in cases where a pylon doesn’t move, you can’t tell for sure if the wheel is inside or outside the pylons.

A user on Twitter called this out to Flamboro Sunday night after the race, at which the track’s Twitter account replied that they’d love to use HD cameras if they have the funding for it. I don’t pretend to know the funding mechanics works at Flamboro, but I do know that a track that is handling hundreds of thousands of gambling dollars a night and is offering a race worth almost $200,000, it should be using more recent technology than what existed before I was born.

I hate to use analogies to other sports, but in these sports where literally inches can make the difference between winning and losing, the ability exists to leverage modern technology. How many times in an NFL game do we see cameras zoom in by 1,000 times down to the pixel to see if a player’s foot was in bounds, or in the NBA to see if a player’s foot was on the 3-point-line. For a sport given billions of dollars in alternate gaming revenue through the years, how can at least not some of it go towards improving the infrastructure and presentation of the product?

The most fascinating thing in all of this would have been to see how the results played out had Filibuster Hanover been disqualified. Because he was lapped onto Western Joe and Western Joe was lapped onto Eddard Hanover, I think you would have had to elevate Eddard Hanover from third and place him first. I’m willing to venture that if in the history of harness racing a third-place horse has been placed first, that it’s never happened in a six-figure stake race. From that regard, maybe it was just easier to let things stand as is rather than sort it out from there even further.

I don’t think Eddard Hanover being placed first is as crazy as it sounds considering the combined number of pylons the top two horses hit or went inside, but I wouldn’t expect any appeal. Eddard Hanover and Filibuster Hanover are both trained by Ron Burke and both owned by predominantly the same group of people.

If you take the rules word for word than technically you could say that the Judges got it right, by the book. But after seeing what occurred visually, common sense will tell you otherwise.