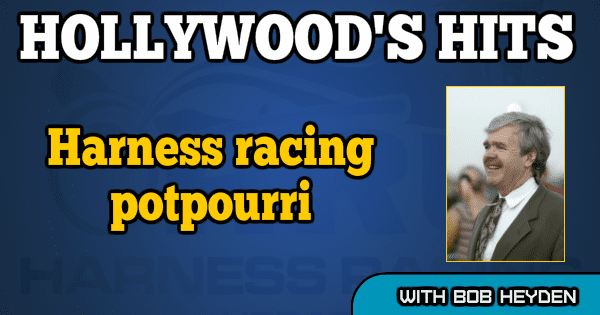 Escort was the winner of the first Meadowlands Pace (1977), then the richest race ever held thanks to a purse of $425,000. The winner was driven by Carl Lecause for owner Bernie Mann — which gave a distinct New Jersey flavor to the first Pace and going to a future NJSS stallion.

Rainbow Blue, a daughter of the standout Breeders Crown winner Artiscape, dominated like no other pacing filly who captured Horse of the Year honors. She was 20-for-21 in 2004 — her only loss a break in the Mistletoe Shalee on Hambletonian Day. She tossed in a win against older fillies later in the year to solidify Horse of the Year honors for Team Teague and did so against Triple Crown winner Windsongs Legacy.

Hot Lead was one of the most popular Meadowlands Pace winners. The gelded son of Jaguar Spur raced for Brian Magie and was driven by George Brennan. He was voted best in his class at year end in 1996 and was nicknamed the “Green-Goggled Gelding”.

Q. Can you name the driver that posted the second and third 1:55 mile at the Meadowlands?

2008 Bluegrass was indeed a preview

There was $98,000 on the line at the Red Mile for the best 2 Year Old Trotting Colts in 2008. The 2-5 favorite and the winner was Muscle Hill. The 7-5 second choice and runnerup was Swan For All. Fast forward to 2017 and that dynamic siring duo had the top three finishers in the Horse Of The Year balloting:

Bit Of A Legend N. You’ve got to admire his tenacity (Levy win, Levy second, sweep one year with a dead heat with Wiggle It Jiggleit in there) and the way he maintains his form. Even after a hiccup that was his 6 YO season (17 1-2-3 $38,523).

May 9, 1963. Triple Crown winner to be Romeo Hanover — trained by a young Jerry Silverman — was born. This meant back-to-back Triple Crown winners for Hanover Shoe Farms following on the heels of Bret Hanover the year before (May 19, 1962 foal).

May 12, 1983 at the Meadowlands was the date of Cam Fella’s last loss. It came at the start of year two in the World Cup. He would then rattle off 28 in a row to end his season at 30-for-36, win a second straight Horse of the Year title and set the all-time record for the most wins and starts for any HOY. To this day, no pacer since has backed up HOY titles.

In May of 1958, 85-year-old Ben White passed away in Orlando, FL, his favorite training grounds. He was a four-time Hambletonian winner.

Through 59 starts of their illustrious careers, both Hannelore Hanover and Moni Maker have/had 37 wins.

The ultimate “Horse With No Name”

Can you think of a race less likely to have a horse in it without a name than the Kentucky Derby? Well, that’s what happened in 1882 when Apollo won. It was also the last time (until Justify this year) that a horse won it without racing as a freshman. But another colt wound up coming in ninth — and was referred to by the announcer as “The Pat Malloy colt”. That is also the way he appears in the official chart. In no other Kentucky Derby chart, covering 144 editions, is any horse referred to as such. Colt-filly gelding-ridgling-you name it because they were all named, except for this guy.

The chart-caller’s recap read: “Harry Gilmore broke in front, followed by Babcock, the ‘Pat Malloy colt’ and Robert Bruce. At the mile, Harry Gilmore was still on top, with Runnymede moving on the outside to take third place. As they were well into the stretch, Runnymede took command, and looked the winner until Apollo started a cyclonic rush an eighth of a mile from home. Apollo caught Runnymede and few jumps from the wire and won by a half length.”

There’s a footnote on the bottom of the chart that reads, “The Pat Malloy colt was unnamed when racing in the Derby and is referred to by his sire’s name, Pat Malloy.”