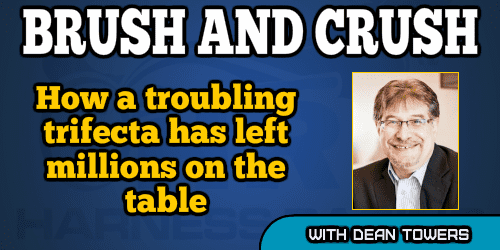 Leaving tens of millions on the table

Meanwhile, simulcast players (which make up about 90 per cent of customers) were trying to keep an eye on Mohawk’s 11 races, and Hoosier’s (an underrated racetrack in terms of field quality for bettors) 12. I’d be remiss not to mention the Ohio tracks evening cards, along with Vernon and Flamboro and Buffalo and….. well, you get the picture.

When we examine the frequency and scheduling of events in harness racing on any given Saturday, we might think the sport has too many horses. The fact is, it has too few.

As Darin Zoccali wrote in the Daily Racing Form several months ago, 2017’s estimated foal crop of 7,034 is projected to fall to 6,366 by 2020. That six-hundred or so horse loss might not seem like the end of the world, but when extrapolating the numbers in terms of overnight horses (to fill all these Saturday cards to generate betting dollars), it’s very troubling.

Zoccali contends, “In the year 2020 there will be 7,000 fewer standardbreds on the racetrack in North America than there were in 2015. The horses that will make up the overnight horse population (between ages four and nine) in 2020 will be numbered at just 6,500 on this entire continent, compared to 10,582 in 2015.”

It feels like the sport is stuffing a square peg into a round hole. Something doesn’t compute, and it’s costing this business, in my view, millions of dollars now and perhaps many millions over the next decade.

What’s the solution? I believe there are a couple of strategies that can be explored.

For example, in a 22-hour period Saturday and Sunday, Pocono and Chester will race 27 races and the near 200 horses will generate a very low handle per entry. This creates an industry-wide revenue issue, because these entries are being used sub-optimally.

If even 30 of those horses were available for the high handle Meadowlands card – where purse dollars generated per entry is the highest in the sport – the “business” makes more money.

The National Football League works diligently to schedule games so they bring in the most revenue; it’s why we often watch a national game between the very popular Cowboys and Steelers. Harness racing continues to want to show the Jets versus the Bears in prime time. In my view, unless this is addressed, and as overnight horses become more and more of a hot commodity, the industry will be leaving more money on the table than they already are.

The sport has never scheduled their meets with revenue as a key performance indicator. Harness racing needs to find a way to give the top handle tracks scheduling preference so they can deliver the best fields and bring in the most money.

Now that scheduling has improved, schedule the races better

This past week, former NYRA CEO Charles Hayward wrote about a commissioned McKinsey & Co. report which concluded better off time scheduling would increase yearly handles by $400 million. Assuming that top-line number is correct, and using a back of the napkin revenue calculation, that implies a revenue increase of close to $100 million.

In the sport of harness racing I think we’d agree that the scheduling of post times is a mess; President Trump would probably tweet that the published off times are “fake news”, and in this case there’d be no argument. We’ve all seen scheduled post times be off by close to an hour by a card’s conclusion at some tracks, and it defies belief.

Harness racing – with handles only about one-fifth that of the runners – would not see $100 million dollars from a scheduling plan, but perhaps a $15-$20 million yearly bump is doable.

Jim Gagliano, president of the Jockey Club, has been working on, and implementing a plan for thoroughbred racing to achieve optimal scheduling. Harness racing should be, through a detailed business plan, doing the same thing.

In the end, I believe with falling foal crops and a troubling lack of overnight horse supply, harness racing’s revenue problems are not going away. In 2018, every dollar matters, and with less than optimal meet and post time scheduling the sport is leaving millions of them on the table.

The new paradigm detailed above might be uncomfortable for some, but the old rules don’t apply anymore. The math just doesn’t work.