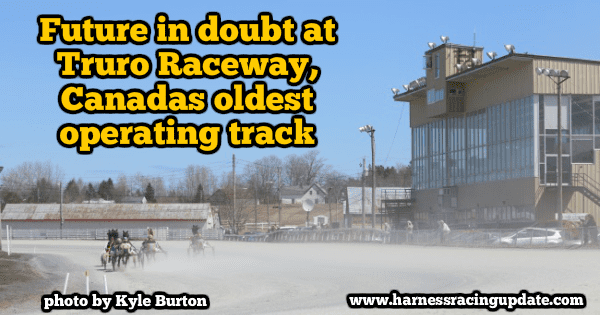 Future of Truro Raceway in doubt

The Nova Scotia track — arguably Canada’s oldest operational racetrack and the former home of Somebeachsomewhere — is open but struggling as funding for it has been removed from the provincial budget. Local politician Lenore Zann is helping fight for its survival.

Harness racing has resumed for the 2018 season at what is arguably Canada’s oldest operational racetrack. A switch from Truro Raceway’s traditional Sunday afternoon races, the seven dashes carded for the evening of Friday, April 27 drew just under $8,500 in wagering. Much is riding on the demonstrated viability of the newly-independent raceway, which was formerly operated in conjunction with the Nova Scotia Provincial Exhibition (NSPE). That partnership came to an abrupt end in late February. Seventeen staff were laid off, including general manager Joe Nicholson, with a handful subsequently rehired to work in essential roles at the track’s teletheatres.

The move came prior to the passing of the 2018/19 provincial budget, in which there is no mention of provincial support for harness racing. Lenore Zann is the Member of Legislative Assembly (MLA) representing Truro and Bible Hill in the Nova Scotia Legislature, and the Critic for Agriculture. When Agriculture Minister Keith Colwell was unavailable for an interview on the subject, Zann asked him for clarification on where harness racing funding now appeared in the budget documents.

While harness racing has typically been listed as such in the provincial budget, it does not appear in the most recent documents. Zann said that Colwell confirmed funding for harness racing was the same for the new budget as it had been the previous year (i.e. $1 million, to be shared among Nova Scotia racetracks), although it was not explicitly named. He described it her as a “flow-though” that “comes from the Atlantic Lotto to the provincial Finance Department and through to the Department of Agriculture to disperse,” although there is no record of it in the budget, said Zann.

So while funding is in place for the current year of racing in Nova Scotia, its disappearance from relevant documents stands out to the track’s hometown MLA. “I’m concerned that I can’t find it in the budget. I’m concerned that there’s no budget line and that it’s not expressly written out. Where is it?”

Revenue generated by Truro Raceway and simulcast outlets is also seemingly invisible, said Zann. “(Colwell) said they don’t make any money, and that the Truro track has been losing money for years. He said the only ones that make any money are Inverness Raceway and the Sydney track (Northside Downs).”

The Canadian Pari-Mutuel Agency no longer provides wagering data from individual racetracks, but provincial figures remain available. Nova Scotian wagering is indisputably in decline, at least at the three provincial pari-mutuel tracks: Horseplayers bet $815,308 (gross) on races at Truro, Northside and Inverness in 2016, and $735,831 (gross) in 2017, a decline of 9.7 per cent. Part of the problem is unavailability of the Cape Breton tracks’ signals outside of their small home communities.

Removing them from the CPMA data shows that Truro Raceway brought in $79,4000 in Canadian wagers placed outside of Nova Scotia in 2016, and $60,855 in 2017. International betting accounted for $120,539 of Truro Raceway’s gross annual handle in 2016, and $97,701 in 2017. It is difficult to imagine that Truro Raceway could be considered the least-profitable Nova Scotian track, when it is the one most available for wagering, and the only possible source of bets originating outside the province and country. It also has three affiliated simulcasting venues: Truro Horsemen’s Club, independent but located trackside; Poker and Ponies OTB at Casino Nova Scotia, Halifax; and Brewsters OTB, Bedford, NS, which previous management noted generates most of the track’s handle. Racing and betting accounted for 65 per cent of all revenue brought in on the Nova Scotia Provincial Exhibition Complex (NSPEC) grounds, according to a March 2017 NSPEC Commission report.

Truro Raceway’s financial troubles are no secret, although recent meetings about them have excluded Zann and others who support the track’s future. “There are all these private, secret meetings going on, and they’re not allowed to tell anybody what was said,” she explained. “I’m asking the questions, but getting murky responses… Then there was nothing about it for a couple of months. In February, the hammer came down.

“What seems to be happening is the government is taking control of the whole thing. They came in that one day and fired everybody. The people were all told to take their stuff and leave the property. They were escorted off the property, no notice given.”

“I was informed and then I started calling around, trying to find out what was going on too. They closed down the whole area and wouldn’t allow anybody on the property. It’s kind of still like that now — they’ve still got a lockdown on the property. Now only certain people are allowed on there.”

With another Friday evening of live races on the horizon, the Truro Harness Horse Owners Association (THHOA) must rent the grandstand from NSPE. The Association also now pays $200 monthly to lease areas of the formerly-shared Truro Raceway/NSPE site indispensible for keeping and training racehorses. The lease is for one year, after which the future is unknown. Access to the grounds has been restricted; horsepeople entering the backstretch have reported being unable to do so from the grandstand-side of the property.

A previous NSPE Board attempted to shutter the track in 2013, issuing eviction notices to horsepeople on site. The ensuing protest helped keep Truro Raceway alive, and revealed that the board, which decreed its closure, saw the track land as valuable real estate. Truro Raceway and the NSPE assets were foreclosed on, not sold. The track continued to operate as a pari-mutuel racing venue.

The provincial government provided $248,976 in 2017 purse subsidy funding to Truro Raceway, an amount Zann said the Agriculture Minister confirmed was in place for 2018. Although the current provincial budget does not contain these details, past editions show other harness racing funds for activities outside of the pari-mutuel purview.

The only pari-mutuel track left in mainland Nova Scotia will remain in limbo until the end of the year, unless a more secure plan is put in place for its continued operations.

“The situation is worrisome for me, because it feels like the Liberal government is letting the Truro Raceway sink or swim on their own,” said Zann a member of the New Democratic Party (NDP). “It’s almost like there’s a carrot being held out under (the THHOA’s) nose, and it’s like, ‘If you be good, and don’t make a fuss, we’ll make sure the money is there for you this year.’ But what are government’s plans for the Raceway grounds after that?”

The former actress told Harness Racing Update that historic racetracks must be evaluated in terms apart from their success as gambling entities. “There is also the issue of heritage. As someone who is a strong believer in the importance of arts, culture and heritage, I believe governments miss the total picture when they simply ask, ‘How much money is it making?’, as opposed to ‘What benefits are being provided to the people, culture, and continuing heritage of the community?’”

Truro Raceway opened in 1865, 124 years before the first legal Canadian casino ended horse racing’s virtual monopoly on gambling dollars and a flood of other betting options arrived on the scene.

Zann suggested open communications would be in the track’s best interests. “The harness horse owners are going to need help, and they are going to need people to come and commit to making it successful. I think that’s why so many people are scared to say anything: Because they want it to be successful, some are hoping for future jobs from government, and they’re being told they can’t say anything.

If it’s a choice between transparency and invisibility, the smart money is on the first option.