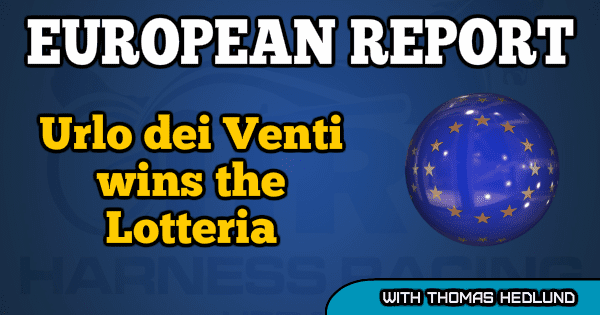 The 69th edition of $843,000 Gran Premio della Lotteria was held at Agnano racetrack in Naples, Italy on May 1.

Enrico Bellei has been among the top Italian drivers for many years and with Urlo dei Venti he collected his fourth victory in the race. Bellei has earlier been successful with Legendary Lover K, Wesgate Crown and Timone Ek and after this victory, he and owner Stefano Simonelli received a ticket for the Elitlopp at Solvalla later this month.

“Now we have to go home and take a stand regarding how we’re going to do with this invitation. This is of course a great thing for me. I’m just a small breeder and Urlo dei Venti always pays me back,” said Simonelli.

Urlo dei Venti won the Prix du Luxembourg in Paris in January and is one of the best Italian bred horses at the moment. Ringostarr Treb and Twister Bi are more merited so far, but Urlo dei Venti has the right qualifications to become a trotter for all the biggest races in Europe.

“The horse improves all the time and he manage to race on different tracks and distances. This victory was impressive,” said Bellei.

Finlandia-Ajo at Vermo racetrack in Helsinki, Finland is scheduled for Saturday (May 5) and the mile race gives the winner an invitation to the Elitlopp.

Among the contenders, Uza Josselyn shows up with Swedish driver Erik Adielsson and the horse is already invited to the Elitlopp.

There is a card at Vincennes in Paris on Saturday and several high-class races are on the schedule. Bird Parker and Belina Josselyn, two of the most outstanding horses during the winter meeting in France this season, will battle in the $143,000 Prix Kerjacques.
The best 4-year-olds in France meet in Criterium des 4 ans ($263.000) over 1.8 miles and the Franck Leblanc-trained crop dominant Erminig d’Oliviere (Scipion du Goutier) will chase 14 opponents.