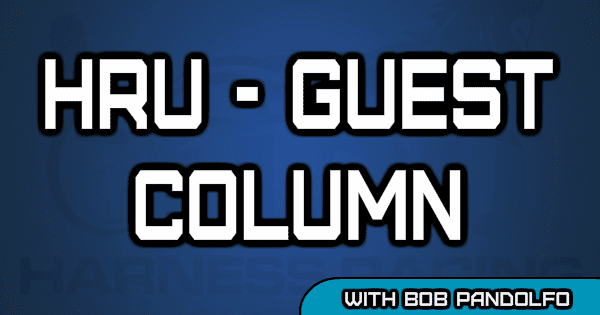 Hall of Fame driver Ron Pierce agrees that something must be done to take speed out of the game to attract more bettors and increase excitement.

For years, most harness tracks that I followed, including Roosevelt, Yonkers, and the Meadowlands, had a percentage of winning favorites that was around 34 per cent. The payoffs were good and it wasn’t hard to find good value bets.

But as we know, the racing changed. The favorites started to win more often, and the win percentage of inside posts increased sharply. This started as soon as the sulky changed from wood to steel, in the late- ‘70s. As a professional handicapper, I’ve always taken my job seriously. For the past 25 years I’ve kept my own speed tables for all harness tracks.

As soon as the “modified sulky” became the bike of choice, the races went about a second faster on the half-mile tracks, and a couple of seconds faster at the Meadowlands and other two turn tracks. At the half-mile tracks, the new bikes dramatically changed the racing. Post 1 started to win at a higher rate, the outside posts started to win at a lower rate, and the percentage of favorites increased. Payoffs, in general, decreased. As the payoffs decreased, so did the betting handle.

As years went on, the sulky evolution continued. Another profound change was in 2003. This is when the first off-set bikes were introduced. The first one was the Advantage bike, which was 6 inches offset. Once the off-set bikes were the norm, leavers dominated, as did chalk. Attendance and handle continued to decline. I’ve corresponded with thousands of harness bettors and fans in my career, including many regulars, and several professional bettors. Many of the regular harness bettors that I know stopped betting harness races and switched to thoroughbred racing, because the payoffs were better at the flats.

Another big change in the racing, when compared to when the sport was thriving, is the post position bias. The inside posts always won more than the outside posts, but not like now. On most half-mile tracks, for instance, the outside posts, 6, 7, and 8, win at half the rate they did in the wood bikes. Most five-eighths tracks have the same problem. This is one of the main reasons why there are so many short-priced winning favorites. The bettors know that the outside posts don’t win, so all of the money gets bet on inside horses. For example, a horse that would have been 5-1 from post 8 years ago, is now 35-1. And a horse that has post 1 that would have been 2-1 years ago, is now 2-5. I’ve interviewed a lot of harness drivers, and the drivers are well aware of how the sport’s changed.

So the question becomes, what can we do to help harness racing survive?

In my opinion, the first thing you have to do is fix the product on the track. There are only two ways this is possible. Either you have to race longer races than one mile, or you have to go back to the conventional wood bikes. The problem with longer races is that harness racing fans are used to the one-mile distance. Every time a track runs a race at something other than a mile, they get complaints, particularly about the fractions. Some fans complain that they can’t figure out the last quarters, or they don’t know how to compare the final time at a mile and a quarter, to the final time at a mile.

The problem with the faster races, and the bikes, is it’s much easier for the horse on the lead to carry its speed. In an interview, Hall of Fame driver Carmine Abbatiello said that the speed bias has taken a lot of strategy out of the game. Hall of Fame trainer Brett Pelling was recently interviewed in this publication. Pelling said that the modern bikes are hurting the racing, and he also noted that the drivers lean back which makes it harder for horses to rally from off the pace. Pelling suggested a return to a slower bike, such as the Jerrold. He also noted that in Australia they don’t allow the drivers to lean far back.

I was chatting about this subject on Facebook, when Hall of Fame driver Ron Pierce dropped in to offer his feedback. Here is what Ron Pierce had to say:

“Bob, I agree 100% with your opinion about the race bikes, you are so right on. Harness racing was definitely more exciting and unpredictable and the fastest horse did not always win the race with the wood bikes. The driver’s strategy was a huge factor back before we went to the modified sulky.

The horses are so much better, but the bikes have made harness racing boring. That’s the biggest reason I retired when I did. Harness racing was just was not as much fun. We can only blame ourselves for letting this happen in the first place.

Hopefully, Cammie Haughton, or someone, will take a long hard look at how conventional race bikes could improve racing that much more and benefit everyone. We’ve got to try something.”

Pierce also mentioned that at some tracks the judges don’t allow the drivers to back down the pace, which contributes to less movement in the race. When the pace is slower, the outside flow has time to get into position. This is why years ago you often had a very active outside flow with a lot of movement.

Whenever I bring up this subject, some people say that I’m crazy, how can we go back? But recently, at Yonkers Raceway, the new Director of Racing, Cammie Haughton, made several key changes that resulted in a significant increase in handle. One of those changes was to get rid of the “passing lane,” something that many harness writers urged the sport to drop. This was a controversial move, because every time a track makes a change, some people will complain. But the passing lane was a mistake. It made the racing less exciting because the driver that was sitting third or fourth sat in and waited for the stretch. This resulted in more single file boring races. Someone finally had the foresight and guts to make a change. Hope springs eternal.

Many years ago the NBA created the 24-second clock to get a shot off. They did this to create more action because the players were just dribbling the ball and passing it back and fourth, which was boring. The league knew that you need action and movement.

If harness racing continues to be dominated by short priced favorites and easy wire-to-wire winners, handle will continue to decline, and, eventually most of the tracks will close. Going back to the conventional wood bikes may be a gamble worth taking.