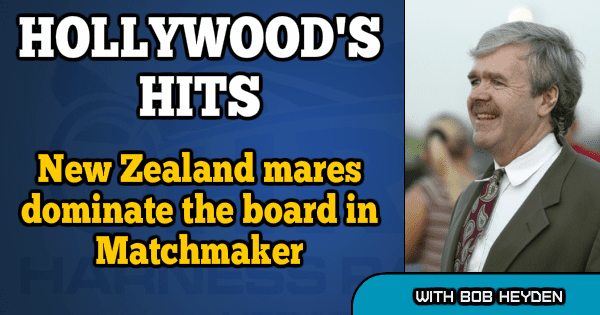 Down Under wonders on display

There were three New Zealand-bred mares in last Saturday’s $373,000 Matchmaker final and they finished 1-2-3. All three are out of Live Or Die mares!

Bagdarin-Nomorenuki and Top Tart — in order — are the three mares by Live or Die, a top performer in the mid-1990s for Val D’Or Farms.

Keying in on Velocity

The two horses that won back-to-back Levy finals are both still active — Foiled Again, the 2009 and 2010 winner and this year’s champ, Keystone Velocity, who also won in 2017 en route to the Older Pacer of the Year Award.

Keystone Velocity has now won the last three $500,000 or higher pots in the industry for the Older Pacing set — the Levy this year and last and the $500,000 Ben Franklin at Pocono in 2017 — for trainer and part-owner Rene Allard.

• April 30 marks the 15th anniversary of Brian Sears’ arrival to the Meadowlands. He came in the door in 2003 with $25 million in career earnings (He now closing in on $190 million) and just as quickly had the 2003 Meadowlands Pace favorite and was on his way to a Hall Of Fame career.
• David Miller is back. The leading money-winner among active drivers first cracked the top five at the Meadowlands in 1999 in his debut season. He hit the top three for the initial time in 2001-2002 finishing third each time-and then hit paydirt in 2003 with his Triple Crown win with No Pan Intended, copping his very fist Big M title.
• It’s the end of April, which means remembering a time when the Berrys Creek took some of the ink, especially in 1993-1994-1995 when John Campbell not only won it three straight times for three different trainers, but he posted the three fastest ever Berrys Creeks with:
1993 Vine Street 1:50.2 for Bob McIntosh
1994 Cams Card Shark 1:51 for Bill Robinson
1995 No Standing Around 1:51 for Joe Holloway
• A decade ago, Yannick Gingras within a 6 day span, got the drive on Foiled Again for the very first time (July 13, 2008), and six days later was in the Meadowlands Pace for the ages — the Art Official/Somebeachsomewhere classic.
• When is 3-for-30 not bad? When your name is Armbro Dallas and that was your record for the year entering the 1986 Breeders Crown in California against Forrest Skipper less than a year after he defeated both Forrest Skipper and Nihilator at Garden State Park. How about the 3-for-30 record (30 3-8-4 $182,987) that Zoot Suit posted in his sophomore season (1976), but Norman Woolworth recommended he go stand stud in Sweden and he became the leading sire there for six straight seasons?
• Quick — who was the only driver to pilot Marion Marauder to victory at age two. Roger Mayotte $2.30 won with the future trotting Triple Crown winner at Woodbine on Oct. 1, 2015.