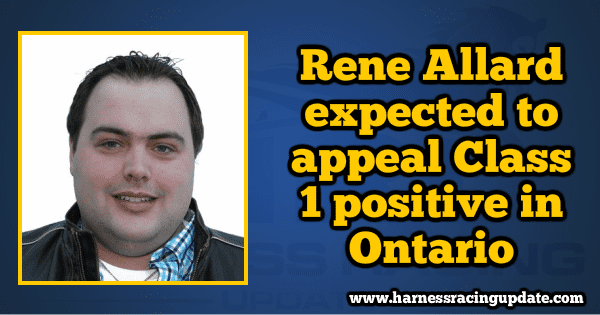 The AGCO has hit trainer Rene Allard with a $5,000 fine, one-year suspension and two-year probation for a codeine and morphine positive on horse One Too Many at Woodbine in March of 2017.

The lawyer for trainer Rene Allard is saying she has requested an “immediate stay” to appeal Allard’s one-year suspension, $5,000 fine and two-year probation for a Class 1 positive issued Thursday by the Alcohol and Gaming Commission of Ontario (AGCO).

The Allard-trained horse One Too Many received the positive test for codeine and morphine — both Class 1 drugs — on March 18, 2017 after a race at Woodbine.

In a statement posted on Allard’s Facebook page, lawyer Jennifer Friedman wrote: “A residue sample was performed by a CPMA approved laboratory. The residue test yielded no presence of codeine and 19.9 ng/ml of morphine. A hair test was performed and yielded neither morphine nor codeine. This supports the high probability of environmental contamination or error on the part of the original laboratory.”

Despite the AGCO taking more than 13 months to investigate the positive — reportedly to determine if there was possible environmental contamination — Friedman wrote the fine and suspension was “unfair and premature” and said she will seek to get a hearing with the province’s Horse Racing Appeal Panel.

“We are confident in a favourable outcome,” she wrote.